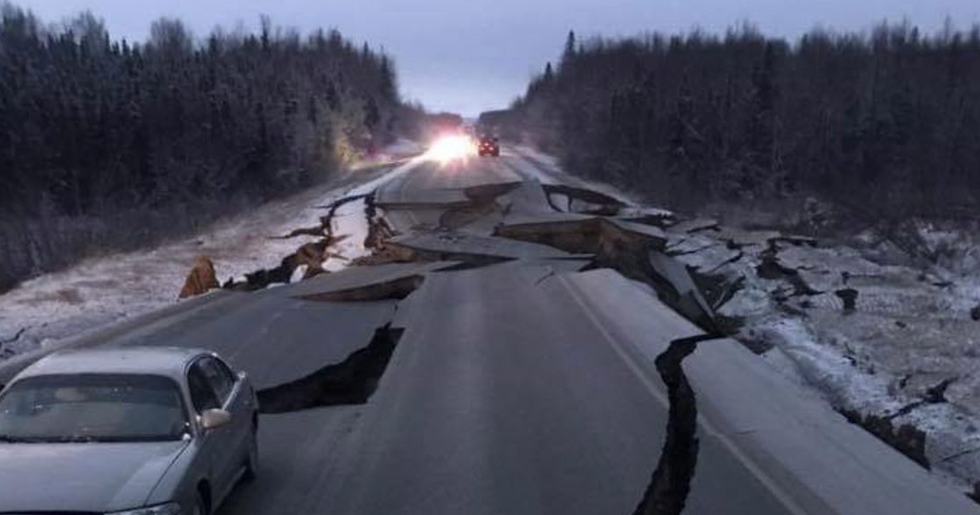 This morning, a massive 7.0 magnitude earthquake rocked Anchorage, Alaska. For reference, that's as big at 2007's famed earthquake in Indonesia, and 2010's earthquake in Haiti. Whether you've felt an earthquake or not, you likely know it's a very scary experience to live through one. According to British Geological Survey, the layman's scientific explanation of an earthquake is this: "Movements within the Earth’s crust cause stress to build up at points of weakness and rocks to deform. Stored energy builds up in the same way as energy builds up in the spring of a watch when it is wound. When the stress finally exceeds the strength of the rock, the rock fractures along a fault, often at a zone of existing weakness within the rock. The stored energy that is suddenly released as an earthquake."

Unfortunately that stored energy resulted in an enormous shifting of rock this morning in Alaska. According to eye witnesses in Anchorage, roads were ripped apart like cardboard and schools and offices were forced to evacuate.

Airports told planes not to land.

ANCHORAGE CENTER (ZAN) HAS ISSUED A GROUND STOP. This is a ground stop for all traffic to airports destined for Z… https://t.co/Okq0CKEIbk
— Ethan Klapper (@Ethan Klapper)1543601308.0

In a further message, ATS sent out a memo prohibiting planes from flying over the airfield. That's a pretty big deal.

In this terrifying video, you can see an entire courthouse wobble and shift while terrified attorneys cling to objects for safety.

This is what happened on the 6th floor of the Nesbett Courthouse during the Anchorage #earthquake. Both attorneys… https://t.co/eoAAXXPDTe
— Heather Hintze (@Heather Hintze)1543603645.0

Both people in this video thankfully evacuated safely after the shaking stopped.

There was a brief tsunami warning after the earthquake, but luckily, that's been cancelled since.

The Governor of Alaska, Bill Walker, declared an official state of emergency. And you're about to see why...

Just look at the destruction the quake caused.

It's almost unimaginable that concrete could be torn apart so easily.

This is an image of the floor of the school referenced above.

Can you image how intense an earthquake has to be to literally rip the floor in half? Our thoughts are with the people of Anchorage, Alaska at this time. Hoping all residents are safe and warm during this difficult time.