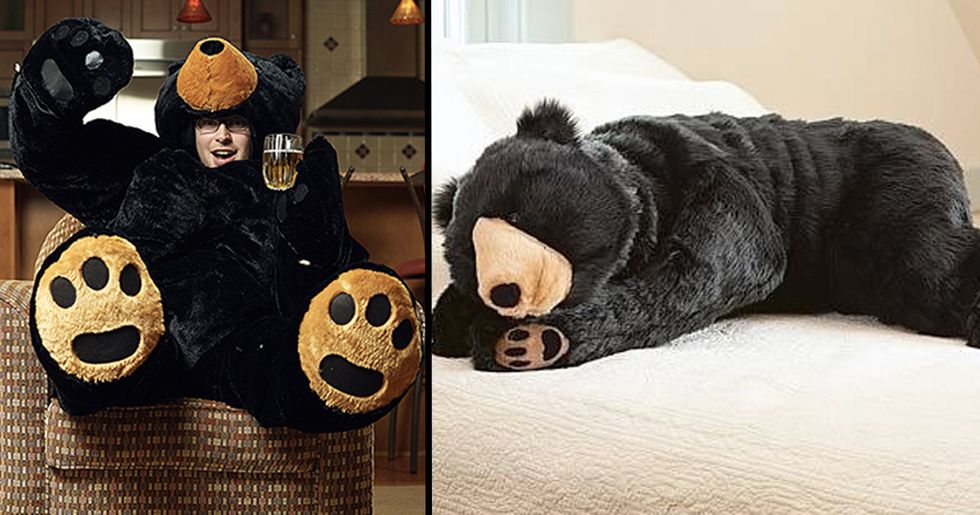 If you’re anything like me, you’re not going to function in the morning, afternoon or night without your solid 8 hours of sleep and probably a few naps in between. Luckily your nap game is about to be improved massively with this new sleeping bag which apparently doubles up as a piece of modern art.

The bear sleeping bag let's you nap, looks awesome and if you really want, act out that mad scene in The Revenant where Leonardo DiCaprio fights a bear. You know the one, it won him that elusive Oscar after years and years of disappointment. Anyway if you want to sleep like a king and become a bear it won't come cheap.

Perfect for the winter months

This animalistic sleeping bag looks like it would be heaven for the winter, due to its soft and cuddly exterior.

Not only that, but it also looks real, the design perfectly capturing the bear likeness.

But not only that

Not only is this a sleeping bag but it is also a piece of art.

Yes, you read correctly, this cuddly onesie is also an artistic statement

But not only that

If you can believe it, the bag’s design was actually inspired by a real event.

And a real event that involved a real life bear.

The inspiration comes from a real event, when a bear escaped from the Italian side of The Alps, to the Bavarian side.

The story may not sound that exciting, but Ishikawa saw the artistic credit within it.

Because the bear is so much more than a bear

The ‘problem bear’ as it was dubbed, came to represent so much more than just another animal.

To Ishikawa the bear generated…

'Many different ideas and emotions in people as illusions in reality by just crossing the borderline between countries.'

So following on from this, Ishikawa decided to make the bear into a sleeping bag? Your guess is as good as mine.

But at least it looks comfy

Guess it’s a good thing that the sleeping bag actually serves a purpose.

Cause it looks so warm and comfy.

But again, Ishikawa sees it as so much more

Because if you go to the website and read the sleeping bag’s description.

It says something very interesting

'By hiring this connotation of outdoor goods, this work depicts the contradictive relationship between admirations and love of mankind toward wild nature, and the boundaries that we rarely brake.'

I mean, I think I get it. But at the end of the day, its just a sleeping bag that looks like a bear.

How about the price?

Well now, this is another thing about this sleeping bag.

Because it’s not cheap

Because if you want a handmade replica of the famous bear, then you will have to fork out a mere $2350.

Not too bad I guess

Really, is it worth that much?

There’s so many better offers

I mean, you can get something so much better for so much cheaper.

One onesie, hold the art

For example you can get this lovely number, and really tigers are so much better than bears.

Or how about a lion onesie? I mean, a lion helped Dorothy get to the Emerald City. Also they rule Pride Rock.

How about a different kind of bear?

Outfits like this are cute, cheap and cuddly. The three c's everyone needs in life.

Not exactly a bear, but definitely a Panda

Or maybe add some flare with this Red Panda inspired get-up. At least, I think its a red panda...maybe it's a fox. Who knows with these things!

This lizard-like onesie could beat a meaningful piece of art anyway, at least it's different.

You could even get an animal that doesn't exist

Who doesn't love unicorns, creatures rich in both myth and artistic meaning. Take that bears!

Although I do still wonder

However, I still do question the artistic merit of Ishikawa's sleeping bag. Why did she make it?

Perhaps she remembered how fond bears are of sleeping bags? Well, sleeping bags and anything else they can steal from a camper.

But it makes sense

Although the sleeping bag may be a little over-thought, it makes sense. And bears, although not the nicest animals, still remain to be some of the most beautiful creatures on this planet, so finding inspiration in them is definitely warranted. And again, it's a sleeping bag - so it involves sleep! Yay!