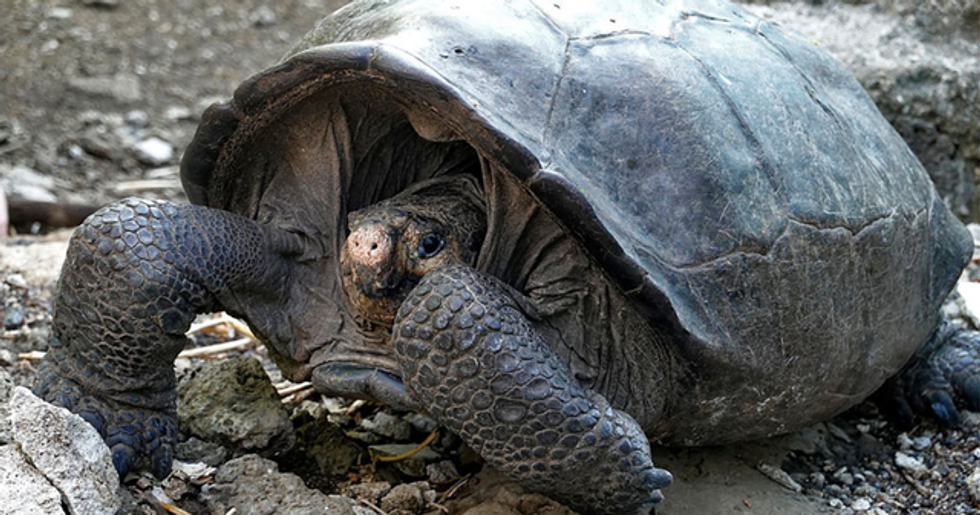 It's no secret that humans are basically running planet earth into the ground. While recent news stories would have you believe that much of this is a recent, post-industrial disaster, we've actually been ruining things for far longer than you may think. Like, hundreds and hundreds of years, in fact.

One of the first environmental disasters enacted by humans was colonisation. Our moving into previously uninhabited areas and turning them into villages, towns and cities wreaked havoc on the wildlife. Nowhere was this more apparent than in the Galapagos Islands. When humans made moves there, the animal kingdom really took a hit. Almost every single species of tortoise was wiped out - and one thought to be gone was the Fernandina Giant.

However, in a recent bit of unexpected great news, it turns out, we were wrong. Ecuador's Environmental Minister has made a statement saying the rare breed has been discovered, alive and well (and really, really big).

For those who haven't been paying attention, the world is kinda in crisis.

Climate change brought about by human activity is set towards reaching an irreparable state - and some of the world's most powerful leaders are still insisting it isn't happening.

In order to save the planet, big changes need to happen.

Big, institutional changes. Things look difficult, but hey - it's probably worth it to save the planet we all live on, right?

The human impulse to over-consume is nothing new, though.

Some see colonialism as the ideological forbearing to climate change and other environmental crises - essentially, putting human growth as a priority over anything else.

The colonization of the Americas by Columbus is a prime example.

Because as Europeans gained more land to cultivate and live on, the cost to indigenous people and wildlife was enormous.

The planet's wildlife should be exceptionally diverse.

Nature truly is miraculous, and also wonderfully weird. Some of the creatures and plants which exist on planet earth seem almost unbelievable.

Unfortunately, that variety is dwindling by the day.

As human excess continues, the price is paid by tons of species of animals. The worst part? Once a species is extinct, there's no way to get it back.

One particularly rich natural resource was the Galapagos Islands.

The huge variety of animal life found on this Pacific archipelago was one of the primary inspirations behind Darwin's theory of evolution.

The Galapagos are best known for their wildlife.

There is a huge amount of weird and wonderful plant and animal species on the islands, many of which are not found anywhere else on earth.

However, the islands took a big hit when humans showed up.

The colonization of the Galapagos Islands caused a huge disruption in their natural order. The humans quickly got to work messing up the islands carefully balanced ecosystem.

One animal that felt the brunt of it was the tortoise.

Humans destroyed much of the natural habitat of the tortoise. On top of that, the reptiles were hunted for meat and even for sport.

The numbers of the animals dwindled.

Of the hundreds of different tortoise species indigenous to the Galapagos islands, only ten are thought to have survived human colonization.

Many of these species are small in number and live only in captivity.

So, let's just say, the future for the Galapagos tortoise population wasn't looking so bright.

Galapagos tortoises are an impressive bunch.

They tend to be extremely big, and live for an extremely long time. They're almost other-worldly, or like a harking back to a bygone era.

The Galapagos Islands once had at least fourteen species of giant tortoise.

The majestic creatures inhabited nine of the different islands which make up the archipelago. All were large and slow-moving, but has slight differences in shell shape.

The creatures are weirdly very cute.

They have a withered, old-man-esque appearance, but their inquisitive eyes and sweet little head movements make them very endearing to watch.

A recent discovery has given us some much needed good news.

A species of the giant tortoise thought likely to be extinct has been discovered, alive. The Fernandina tortoise (or chelonoidis phantasticus) has not been sighted for over a hundred years.

These tortoises are indigenous to the island of Fernandina.

Fernandina is the youngest of the Galapagos islands, and is therefore still the most volcanically active. The frequent eruptions led most to believe the tortoise could not have survived there.

But this turned out not the be the case.

A research team filming for the upcoming Animal Planet show Extinct or Alive? discovered the long-missing tortoise hiding underneath a bush.

Until now, this has been the only known image of a Fernandina tortoise.

Until this week, specimen 8101 was the only known giant tortoise from the Galapagos island of Fernandina. Congratul… https://t.co/PNrjHLWTbL
— Henry Nicholls (@Henry Nicholls)1550706088.0

This specimen was collected in 1906 - over a century ago. It was believed the animal would never again be seen alive.

So, needless to say, people were excited by the discovery.

The Environment Minister of Ecuador, Marcelo Mata, sent out this tweet in celebration of the discovery.

The expedition was led by researched Forrest Galante.

"As a biologist and someone who has dedicated my life to the pursuit of animals believed extinct, this is by far my greatest scientific accomplishment and proudest moment," he told the Daily Mail.

Galante compared the discovery to another famous tortoise.

The discovery was made by a team of researchers.

Members of the Galapagos National Park and United States Galapagos Conservancy made up the tortoise-hunting squad.

The Fernandina tortoise is quite distinctive.

The female is fairly large and has a smooth, rounded shell. She's also recognizable by her adorable rounded, pink snout.

Animal Planet are thrilled by the discovery.

"As the rate of animal extinction is widely debated, it gives us great hope that some species are surviving against the odds and that at Animal Planet we can do our bit to celebrate and support them," said the TV network's president.

The internet is equally excited.

Although some have pointed out that the tortoise's lack of sighting may have been on purpose. "It took him 100 years to find a good hiding place now he gotta start all over again," joked one Facebook poster.

People are hopeful the tortoise isn't the only one.

There appears to be a good chance that there are other Fernandina tortoises also living on the island, meaning there is potential to continue the species.

In other giant-tortoise-related news, did anyone know about this?

A pair of giant tortoises who had been together for nearly one hundred years have recently broken up - and no one can figure out why! We are so intrigued.

Either way, it's nice to hear some positive environmental news.

We'd like to offer our congratulations to the Fernandina tortoise - not only for managing to survive in what sounds like pretty hardcore conditions, but also for being able to outsmart humans for over a century!

If there are any other non-extinct species out there, we want to know about them. It's these bizarre creatures that make our earth so amazing, after all.