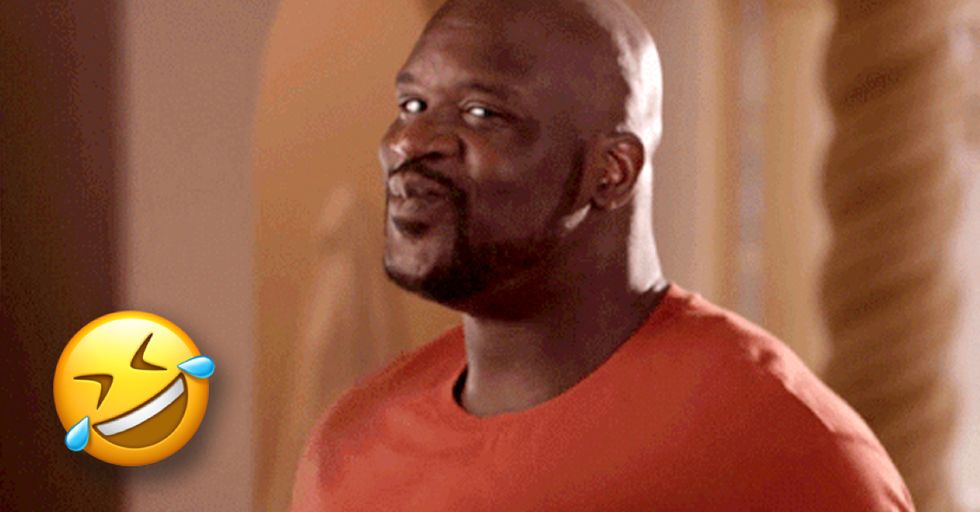 In other words, we love using GIFs to communicate.

Why send a long, belabored text using actual words, when a GIF can deliver the exact same message in seconds.

Turns out, other people are GIF people too. Here are the 17 GIFs they find hilarious.

In comedy, there's a thing called setup and payoff. Literally, when you set up a scenario, a payoff is expected. If that payoff comes in an unexpected way, then the scenario is comedic.
Case in point, Nelly the calm owl isn't as calm as advertised. In fact, her expression is very telling. It's basically saying – "whoooo meeee?" Sorry, we just had to do it.

2. Garbage truck of the future

"This truck not only clears your garbage for you, it flips it back at you, reminding you that our planet is delicate and you need to curb your waste." At least, we assume that's what the commercial for this would say.

3. How to correctly open a milk carton

One of the longest GIFs we've ever seen, but also one of the very best. Trust us, you'll want to stick till the end – the payoff is great!

This right here is an excellent piece of GIF-ery (we know that's not a word, but still). You have a panda presumably named Carl, you have the panda-aides, and you have a whole story helpfully narrated via subtitles.

We don't know what's happening in this GIF. If someone asked us to guess, we wouldn't even know where to start. Honestly, we're super confused. Please let us know in comments if you know what's happening, and pass this to people who do just so we can get a consensus here, because, again, we're at a loss...

Ohhhhhhhhhh! This GIF just had us gasping for air. This is beyond brutal.

We're pretty sure that this was carefully choreographed for days and weeks on end. It still ended like this, though. Poor kid...

We're not sure what happened here. Were they drunk? High? Having a laugh? Who knows, it's just funny.

This is literally the rudest thing we've ever seen, and we're pretty sure it's deliberate. Who taught him to do that? Who?

This right here is ice cold. It was deliberate, it was planned, it was just plain wrong. Penguins, you know.

One of the greatest edits in recent history, Shaq Cat always brings  a thrill of joy to us. It truly is delightful.
Even better, it's the joke that keeps on going. Witness, for instance, the delight that is the above translation of the meme.

One of the best memes ever! Why? There's the holy grail – a human, a fish, and a very persistent cat. Also, subtitles. The subtitles MAKE this.

This is a GIF that looks better the longer you look at it. It has a very happy dog and very happy, very sassy hands. What's not to like?

But haven't we all been in this situation? We thought we'd caught it, but we hadn't. Cue horrified look on our faces.

Poor Santa Cat. His cruel owners pinned a Santa hat on him – with a bell, no less – and now he's tormented by the sound of it.
Honestly, the only thing that would've made it worse is if they'd given him a semi-complete outfit like the monstrosity they did to the cat above.

Short, simple. The best of memes.