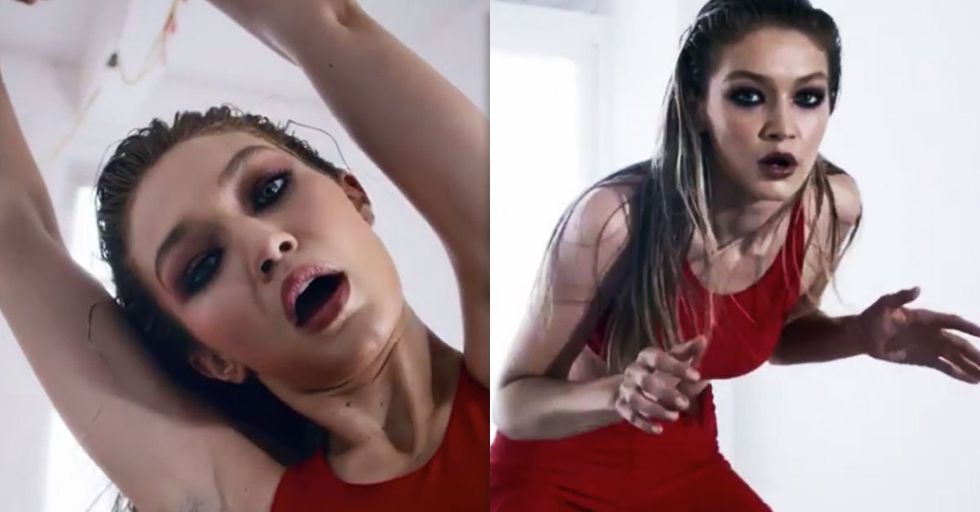 Oh, Internet. You sure do obsess over weird things sometimes.

Like the actual colors of a dress (blue and black? White and gold? Who cares?). Or whether Mariah Carey has a magical invisible chair. Or Jessica Simpson's decision to take her daughter to a makeup counter.

But today? Today, Internet, you've fallen for one of the weirdest traps ever. Today the Internet is obsessed with Gigi Hadid's armpits.

Unless you've been living under some sort of Internet rock, you probably know who Gigi Hadid is.

But just in case you don't, she's an American fashion model. Last year, she was named the International Model of the Year. So, you know. Kind of a big deal.
Hadid is no stranger to making headlines. She's already had quite the year.

Back in February, a video surfaced of Hadid appearing to make fun of Asian people.

The video shows her holding up what appears to be a cookie depicting Buddha and squinting her eyes while holding the cookie next to her face.
The video was originally posted on Snapchat but rather than disappearing after 24 hours, the Internet got ahold of it. People took to the model's social media account to share their disapproval of her behavior. They posted snake emojis, poop emojis, and thumbs down emojis in her Instagram comments. (Because that's how people express themselves these days, apparently.)

As a result of the video (and the outrage it sparked), Hadid was banned from walking in the Victoria's Secret Fashion Show that took place in Shanghai earlier this month.

"I’m so bummed I won’t be able to make it to China this year," she posted on Twitter. "Love my VS family, and will be with all my girls in spirit!!" If by "won't be able to make it" you actually mean, "am not legally allowed to go," then sure, Gigi. So that was the biggest controversy plaguing Hadid's career. At least, it was until another video came to light...

Love Magazine posted the following video on their Instagram:

The video is the latest addition to the Love Magazine Advent Calendar which has already featured Emily Ratajkowski rolling around in spaghetti and Kendall Jenner boxing. (A brief aside: This is way different from any advent calendar we've ever had before. We're more used to advent calendars of the cheap chocolate variety.) Anyway, did you spot the part of Hadid's video that is taking over the Internet?

As you can see, it looks like Hadid has some hair in her armpits. Because hair grows there. Because she — like all humans — is a mammal.
As you might imagine, plenty of people are talking about Gigi Hadid's armpits today. Armpits are a big deal to some, apparently.

Apparently, there's actually some controversy about whether it's actually even hair in Hadid's armpits. The photographer on the shoot said the darkness under her arms was actually due to "the sweat & the dust of that building."
First of all, it could be dirt...but it's probably not, right? Second (and most importantly), who the heck cares? Although there were some haters (when aren't there?), plenty of people stepped up to show their support for Gigi...

Why is everyone so upset about Gigi Hadid having armpit hair? It’s a natural thing, men always have armpit hair eve… https://t.co/u6W1SC4Nxh
— Renezmee (@Renezmee)1512996357.0

In reality, no one should care about what a woman chooses to do with her own dang armpits. You never see people having a conniption when a guy has hair there. What's with the double standard, society?

Once more for the people in the back: Hair is natural. If anything, you could make the argument that shaving it is unnatural. Choosing to shave hair (or not shave it) is a decision that is completely left up to the person the hair is attached to. End of story.
Gigi can have hairy pits and be trying to make some kind of feminist statement, or she can just have hairy pits because she has hairy pits. Or she can choose to shave her pits. You get this, right? We don't really need to continue spelling it out for you.

A lot of people are inspired by what they perceive as Hadid's confidence.

And sure, if seeing hairy pits inspires you to grow your own hair out, then more power to ya. Hadid's certainly not the worst person to be emulating in the current climate.

Whatever your pits look like, we hope you're comfortable making the decision for yourself.

I'm here for Gigi Hadid's armpit hair. When women take control of their own bodies and not society's opinion of ho… https://t.co/vfbeHZgTyQ
— 𝐭𝐞𝐝 𝐜𝐮𝐭𝐞𝐳𝐲𝐧𝐬𝐤𝐢 (@𝐭𝐞𝐝 𝐜𝐮𝐭𝐞𝐳𝐲𝐧𝐬𝐤𝐢)1513098769.0

Here's to hairy (and un-hairy) pits, video advent calendars, and rolling around in spaghetti 'cause you just feel like it. Happy holidays, folks.