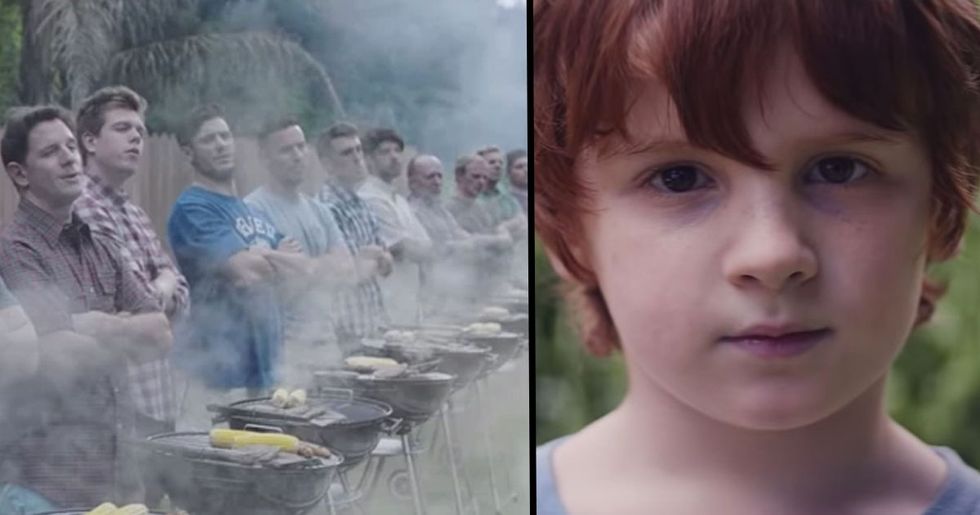 Slowly but surely the world is becoming a better place to live in. Before you know it, we'll all be free to be ourselves, no matter our gender.

Gillette, the king of the male shaving routine since 1900, says enough with the "boys will be boys" mentality. No one benefits from that. Not women, not the general public, and certainly not men themselves.

The new Gillette ad hopes to inspire men to be the best they can be and promotes a healthy understanding of what it means to be a man.

It does seem like a great message to send, doesn't it? But the company has recieved much criticism since the ad aired.

And, now, it seems like they may not have made the best business decision. It's been revealed that they've made some pretty significant losses since their controversial choice.

The Gillette ad is a must-see.

The #MeToo movement started the conversation about how men treat women. Now, Gillette is continuing it by reminding us that men have a choice on how to behave.

The company's new ad is called "We Believe: The Best Men Can Be."

It addresses such social issues as violence, sexual harassment and sexism.

Gillette believes that men should hold other men accountable.

By "this" they mean frequent news stories about men harassing and catcalling women on the street, bullying others and doing nothing to change that.

The ad is targeted at men specifically, and it begins with a flashback to news about the #MeToo movement.

The ad then considers the common excuse "boys will be boys" and asks, "Is this the best a man can get? Is it? We can’t hide from it. It has gone on far too long. We can’t laugh it off, making the same old excuses."

It then cuts to show men stopping their friends from catcalling and making inappropriate remarks towards women.

It also shows a father breaking up two boys fighting at a BBQ, instead of saying "boys will be boys" and doing nothing about it.

Another father interferes when he sees a group of bullies attacking another boy while his own son watches.

“Something finally changed, and there will be no going back," the ad says.

It then ends with shots of men encouraging others to make up and being inspiring fathers.

“Because the boys of today will be the men of tomorrow," the ad concludes. Take a look at the full version here:

Pankaj Bhalla, director of Gillette, told the Wall Street Journal, "This is an important conversation happening, and as a company that encourages men to be their best, we feel compelled to both address it and take action of our own."

"We are taking a realistic look at what’s happening today, and aiming to inspire change by acknowledging that the old saying 'boys will be boys’ is not an excuse," Bhalla continued.

"We want to hold ourselves to a higher standard, and hope all the men we serve will come along on that journey to find our ‘best’ together."

But reactions to the ad split the audience in half.

Some praised Gillette for speaking up about the problems in the way that boys are raised today. Others promised to stop using Gillette's products.

Bhalla told CNN Business, "We expected debate. Actually, a discussion is necessary. If we don't discuss and don't talk about it, I don't think real change will happen."

He also hopes that the ad will inspire men to strive to be good role models instead of chasing after unhealthy ideas of masculinity.

It's not the first progressive ad made by Procter & Gamble, the owner of Gillette.

They have previously received a lot of praise for their Always "Like a Girl" campaign, and for Pantene's "Strong is Beautiful" campaign. The latter showed NFL players braiding their daughter's hair.

Gillette said they had talked to men across the US, conducted studies and spoke to experts of masculinity prior to the ad's release.

CNN Business says people on social media were angry about the ad, saying it was insulting and prejudiced "feminist propaganda."

But these types of responses are exactly why we need the ad.

"The ad is not about toxic masculinity. It is about men taking more action every day to set the best example for the next generation," said Bhalla. "This was intended to simply say that the enemy for all of us is inaction."

And they want to donate 3 million dollars over the next 3 years to non-profit organizations, such as the Boys & Girls Club.

The Guardian reports that The New American magazine "attacked the advertisement’s message, saying it 'reflects many false suppositions.'"

Such as that "men are the wilder sex, which accounts for their dangerousness – but also their dynamism."

"Among the objections were that the video implied most men were sexual harassers or violent thugs," says The Guardian.

"That it was 'virtue-signaling' by a company that doesn’t care about the issue, and that the advertisement was emasculating."

According to The Guardian, Kim Gehrig directed the ad at the UK-based production agency Somesuch.

Gehrig was also "behind the 2015, This Girl Can advertising campaign for Sport England and 'Viva La Vulva', an advertisement for Swedish feminine hygiene brand Libresse."

Some people disliked the video because it was directed by a woman, The Guardian reports.

The Conservative Canadian commentator Ezra Levant wrote: "A shaving ad written by pink-haired feminist scolds is about as effective as a tampon ad written by middle-aged men… Count this 30-year customer out." Uh, excuse you? This blaming of the woman is exactly why the ad was needed. Gillette wouldn’t have let Gehrig direct it if they didn’t think she would be able to send their intended message across. Directors don’t direct in a vacuum.

According to The Guardian, the We Believe advertisement is just one part of "a broader initiative for the company to promote 'positive, attainable, inclusive and healthy versions of what it means to be a man.'"

Gillette wrote on their website, "From today on, we pledge to actively challenge the stereotypes and expectations of what it means to be a man everywhere you see Gillette. In the ads we run, the images we publish to social media, the words we choose, and so much more."

Chronicle Live reports that Piers Morgan, the presenter of Good Morning Britain, has also expressed his disapproval of the ad.

He tweeted, "I've used @Gillette razors my entire adult life but this absurd virtue-signaling PC guff may drive me away to a company less eager to fuel the current pathetic global assault on masculinity. Let boys be damn boys. Let men be damn men."

He also expressed his fury during the show, Mirror reports.

When Susanna Reid, his co-host, admitted that she actually loved the video, Morgan snapped, "Of course, you love it because you're a radical feminist and it makes all men look like monsters."

But Susanna insisted, "You make me sound like a man hater! I love men!"

She then added, "I just want them to embrace all parts of their personality."

Still, Gillette's president, Gary Coombe, stands by their choice of ad because it believes "the best in men."

On their website, Gillette said, "It’s time we acknowledge that brands, like ours, play a role in influencing culture."

"And as a company that encourages men to be their best, we have a responsibility to make sure we are promoting positive, attainable, inclusive and healthy versions of what it means to be a man."

"With that in mind, we have spent the last few months taking a hard look at our past and coming communication and reflecting on the types of men and behaviors we want to celebrate."

"We’re inviting all men along this journey with us – to strive to be better, to make us better, and to help each other be better."

"By holding each other accountable, eliminating excuses for bad behavior, and supporting a new generation working toward their personal 'best,' we can help create positive change that will matter for years to come."

Most of the top comments on YouTube have condemned the ad. But I think the ad just was misunderstood.

Jake Lawrence said, "The ad assumes just because you are male you are inherently sexist. That isn’t even remotely the case and it makes men think they are in the wrong just because of how they were born. Prejudice is wrong no matter who the target is." But that's not entirely correct. Not all men in the ad are bullies and sexists. It was men who interfered with the bullying and harassment. It was men who said thinking "boys will be boys" is unhealthy. It's a society that kept telling them "boys will be boys" as they were growing up. So it seems that the ad actually says men are inherently NOT sexists and NOT bullies.

SiddHealth said, "Where are the women bullies and harassers in this video? I've been bullied and sexually harassed by more females than males."

It's true. There are a lot of female bullies. (How do you think Mean Girls came to be?) and, personally, I would love to see a female version of the Gillette ad. But this one is promoting men's razors. Gillette's slogan is "The best a man can get." Since it's selling men products to men, I think they assumed most of their audience would be men, and so they wanted to be a sort of a mirror, to show men to men, and focus on men's behavior specifically.

Jordan Wharmby said, "Two children play fighting is not the same as two people fighting with the intention of harming each other. What this [ad tries] to do is simply that boys play fighting will lead to them becoming hobbled people, which is untrue."

But the boys were not play-fighting. It was an actual fight over some disagreement. If uninterrupted, such early and repeated exposure to violence desensitizes people to it and they're more likely to start seeing violence as an effective way to get what they want later in life. That's basic psychology.

But now, eight months after the initial ad was released, some disappointing news has surfaced.

It seems like the backlash against the ad was too much to deal with. Massive conglomerate, Procter & Gamble, which owns Gilette (and basically every other company on Earth) has circled back with reports about the woke ad's impact.

And things aren't looking so good.

The company has reported a whopping eight billion dollar loss following the release of the ads this January. It seems like the world just wasn't ready for socially-conscious ads - and that's a real shame.

It's not certain that these ads are the reason for the loss.

Gilette also cites "more competition over the past three years and a shrinking market for blades and razors as consumers in developed markets shave less frequently."

Either way, Gilette are going to make a change.

They claim that there will be no more ads centered around social issues. There next good cause to support will focus instead on "local heroes."

This is pretty devastating news to some.

The Gilette ad seemed to represent a new era of advertising, spreading not just the desire to consume, but the desire to be a better member of society. We hope that this is just a setback and not a total end to socially conscious ads!
20%

$29.49 $23.59
Buy Now
See More Deals
We hope you find these deals as awesome as we do! Just an FYI: we may receive a share of sales from links on this page