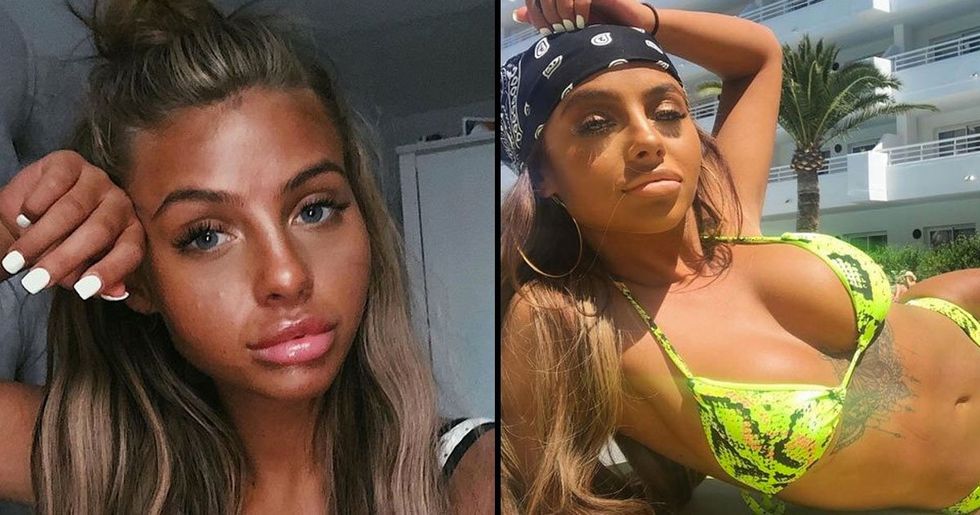 Girl Accused of 'Blacking Up' Responds To Backlash

Tanning is a beauty trend that has been around for a while now. People seem to love bronzing their skin so that it looks like they've spent a week somewhere in the sun. There's nothing wrong with a little bit of bronzing, but, sometimes, some individuals take it too far... and we mean to the point of becoming border-line offensive.

A "race debate" has been sparked on the internet as pictures of make-up artist, Chloe Wilson, have surfaced online. The twenty-two-year-old's Instagram has since been bombarded with comments calling her a "racist," even though she has denied the rumors on multiple occasions. A lot of others have claimed that she is committing "blackface".

No matter what her intentions may be, you can't help but wonder what compels a person to tan themselves to such an extent that they are getting mistaken for a whole other race. Stay tuned as we reveal some shocking images of the make-up artist and her responses to the haters.

If you have a lot of followers on social media, you'll be familiar with the hassle that comes with uploading new content to entertain your audience.

It can end up putting a strain on daily life for some people, but, for others, it becomes a part of their routine.

It's 2019 and it is now acceptable to make a healthy income on social media. Instagram and YouTube have become two of the biggest platforms for starting careers - it worked for the likes of James Charles, Habiba Da Silva, and many other of your favorite online personalities.

We're all guilty of being addicted to following our faves.

The beauty industry is probably one of the biggest industries in the world, with new companies and gurus emerging every single day. You probably follow some on your own socials. I must admit, it is interesting to see what they get up to in their daily lives.

With the millions of make-up artists on Instagram, why are people so upset with this particular one?

Chloe Wilson (@cchloelizabethh on Instagram), is a self-proclaimed MUA with over two-hundred and ninety-eight thousand followers on social media. Each of her posts get thousands of likes and comments.

But, recently, she has been gaining attention for more than just her creative looks.

It's fair to say that Wilson enjoys a trip to the sunbeds, but her obsession seems to have taken a dramatic twist.

Has Chloe just become extremely tanned, or is she actually trying to be "black"?

Many of her followers, and even those who don't follow her, have taken to social media to express their lack of support for the MUA's choice of skin color.

On Twitter, Wilson had to address the issue as it seemed to be getting out of hand.

After being bombarded with comments spewing disgust at her extreme skin transformation, she released these statements.

On her Instagram, users started to leave comments which were slightly unsettling.

The history of this concept is appalling and extremely offensive. It is considered a form of "make-up," traditionally worn by non-black people in order to represent a black person. It can be accompanied by other features that are traditionally associated with the race, such as big lips and wide hips.

Why is it so offensive?

Traditionally, blackface was used as a tool in TV and theater by other races to degrade black people. However, some people don't find it offensive as they see it as humorous - it's really not.

Even popular TV personalities have been called out for being "racist" due to their past antics.

Late-night host, Jimmy Fallon, was recently accused of committing blackface after his problematic impression of Chris Rock at the Golden Globes.

It wasn't the impression at the award's show that was the biggest problem, though, it was something much worse.

The most uncomfortable part of the night was the fact that it dug up a moment that Fallon probably wants to forget. In 2000, he had painted his face to be "black" and spewed some racist nonsense. Let me tell you, it wasn't worth the laughs.

Blackface has no place in today's society.

If you can't see why it's considered offensive, have a read of this article by Vox which outlines the reasons that it is. It really highlights the importance of being aware of historical facts about the issue. That's the main reason that people are upset at Chloe Wilson and other make-up artists for drastically changing their skin color so that they look like a completely different race.

Why don't you check it out for yourselves?

Wilson, twenty-two, claims that she just loves tanning, but her followers aren't happy with that response.

And then there's this one...

It doesn't seem to get any better.

It's just a such drastic change from what she used to look like.

You wouldn't even recognize her, right?!

One user had this to say to Wilson.

But her comment was also met with backlash from Wilson's supporters, accusing her of hating, unnecessarily, on the Instagram star.

And Wilson's response to the backlash was... very confusing.

Wilson seemed to apologize for causing upset, while simultaneously telling people to "f**k off". Hm. Slightly mixed signals, there.

I'd just stick to a nice, natural suntan. That way, people can't accuse you of being racist.

Will Wilson drop the whole over-bronzing thing after all this drama? Who knows... Here's another case of an Instagram model taking tanning a little too far. Nope, Chloe's not the only one - and she's also not the most extreme case. Keep reading to hear about Hannah Tittensor from Belfast...