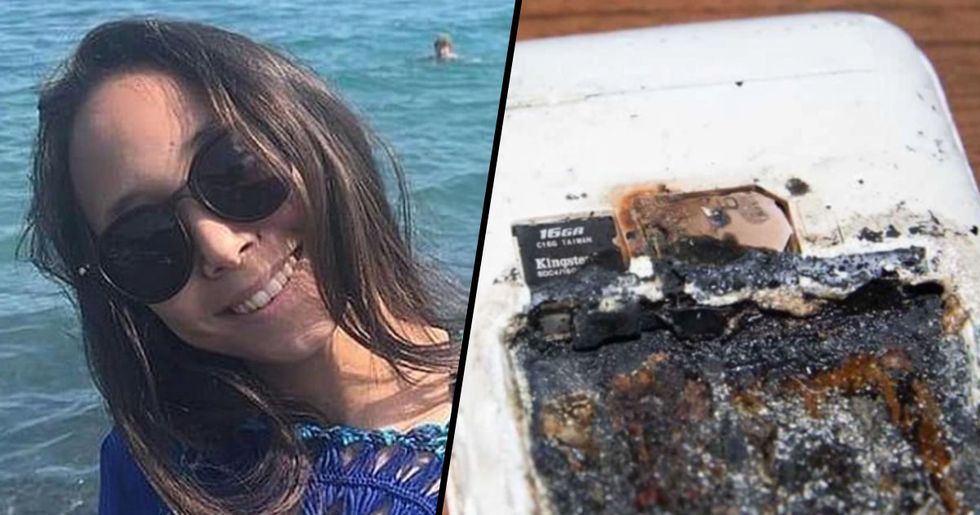 When it comes to charging up our smartphones overnight, it's important that we are careful as our clever little devices are known to be a potentially dangerous fire hazard.

Phones heat up when they are put on charge and, especially if they are being used at the same time, they carry the risk of setting on fire.

A teenage girl in Kazakhstan has been killed in her sleep because her phone exploded while it was left on charge. Keep scrolling to learn more about this devastating story and the true danger that mobile phones can cause...

We probably couldn't live without our smartphones...

And, even if that means charging them up every few hours and taking a charger out and about with us... our clever little devices are totally worth it.

Smartphones do an awful lot of jobs and tasks for us...

It's no wonder that they need charging up so often!

If you think about what actually goes on inside a phone...

The mechanism works at such high speeds that it is, of course, going to warm up slightly - especially when being put on charge.

It has been found that overuse of certain apps causes smartphones to heat up...

Using features such as the camera, WiFi, and display brightness are common factors in the over-heating of smartphones.

But the most common factor in phones over-heating?

Charging. While the majority of smartphones only heat up slightly, there have been many reported cases of smartphones getting extremely hot to the point where they begin smoking or even set on fire.

There have been numerous reports of smartphone owners receiving injuries and burns from their phones...

Writing on Reddit, a Samsung smartphone owner explained that her phone completely froze and shut down. She went to put it on charge, but, within seconds, the whole thing "went up in flames." Luckily, the woman used a couple of nearby towels to distinguish the flames, but she ended up with burns on her hands.

More and more issues have arisen over the years about charging phones...

It is often stressed to never leave your phone charging overnight, especially by fire services all around the world. A fire chief from the U.K warned that we must never plug our phones in overnight after having dealt with houses being completely engulfed in flames - all caused by one smartphone.

Many do not realize it, but leaving a phone plugged in for long periods of time is extremely dangerous...

“Never leave items on charge or unattended for long periods – and ensure the plug to the charger is switched off even if it’s not connected to your phone/electrical item," the fire chief of Leicester Fire Department said.

Falling asleep next to a smartphone is an extremely common occurrence...

Sleeping with phones in bed was also advised against.

Laying your phone on your bed isn't as safe as it seems...

Bedsheets and linen have been found to be very flammable, making a seemingly harmless task of charging your phone overnight something much more sinister.

She was just fourteen-years-old when she fell asleep next to her charging phone at her village home in Bastobe, Kazakhstan.

She fell asleep while listening to music through her smartphone...

But the next morning, her family found her dead in her bed.

Police confirmed that the phone was connected to a power socket...

It is believed that the battery of her phone exploded during the night after heating up from being charged.

Officials were too late in saving her...

The fourteen-year-old suffered serious head injuries as a result of the explosion, and although paramedics tried to resuscitate her, she died from her injuries.

Her cause of death was the phone and charger overheating...

Forensic experts later confirmed that the phone had exploded in the early hours of the morning due to "overheating as it charged."

Alua's best friend, Ayazhan Dolasheva, has expressed her grief over losing her. Posting on social media she wrote: "You were the best. We have been together since childhood. It is so hard for me without you. I miss you so much. You have left me forever."

Alua's death is the latest in a number of tragic accidents involving mobile phones...

These accidents seem to be a regular occurrence in Russia in particular, wherein a twenty-six-year-old woman was found dead in her bathroom after suffering from a suspected electric shock.

Multitasking with a smartphone cost this woman her life...

The Russian woman, who was named Liliya Novikova, was known as "Russia's most beautiful poker player" and it was suspected that she was blow-drying her hair while possibly using her smartphone at the same time.

The majority of people are lucky and escape unharmed...

Earlier this year, Jacob Cohen, who is from the U.K, said that his Samsung smartphone set on fire when he tried to reset the device. Speaking to The Sun, he said it "started glowing and there were flames coming out the back," adding "I couldn’t believe it… luckily there’s no damage to our house."

Should smartphone manufacturers be doing more?

In 2016, Samsung was forced to recall the Galaxy Note 7 after battery faults lead to a number of devices catching fire. The fact that a person has died as a result of a smartphone being left on charge is completely unacceptable. Manufacturers need to be facing this problem and finding a solution to ensure that it doesn't happen again - or, if all else fails, they should discontinue the models completely.