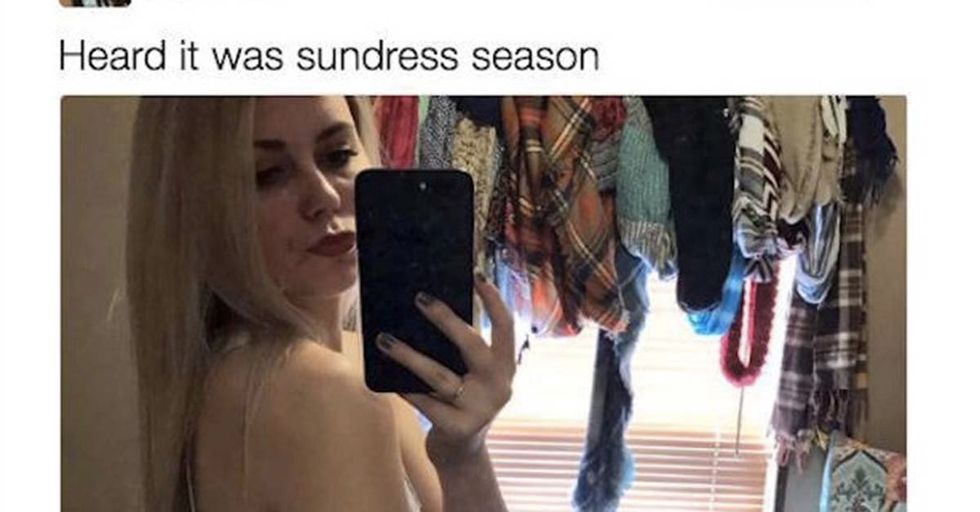 Rule #1: If you're going to take a sexy selfie...fine, great. Whatever. But make sure you have a clean room as a backdrop.

No matter how hot you're looking, people are going to judge what's going on around you more than the way you look, and feelings will get hurt. You obviously take care of your body, take care of your room too. One girl on Twitter learned that the hard way, but she took the lesson and did something productive with it!

...and the complete photo. As you can see it's not "hoarder" bad, but it's likely a turn-off for guys and girls alike.

It didn't take long for the comments to come in.

Then the Photoshoppers got to work with some pretty funny stuff.

One tweet pointed out that homegirl certainly has a thing for Carmex.

Obviously the room is bad, but is it The Simpsons bad?

Maybe everyone wasn't focused on the mess in the background...

And this guy saw the mess and did not care.

But some could do nothing but focus on the room because of the memories it brought back...

She did have a pretty cool response to the haters, though.

Some folks admired the ingenuity.

And others showed their decorating knowledge by labeling her designers.

I love this dude's faux-concern.

I'm guessing this wasn't the response that the duck-lipped girl wanted from her sundress pic.

But that is one messy room...

Then the memes came...

But you know what? SHE FIXED IT. SHE CLEANED HER ROOM.

For the first time in history, judge-y people on the Internet had a positive influence.

Now let's just do something about those ducklips next...

And if you thought that girl's room was bad, get a load of this girl's room.

The internet, being ever so reliable, dragged her too.

And gave some fashion advice...

@og_pocahontas It's kinda chilly out so I would recommend the uggs with that fit https://t.co/FowjPgoouE
— Brandon (@Brandon)1483689369.0

Ooh, this is a good tip.

Is she more attractive in a clean room?

And then, someone found a truly disturbing detail amidst the mess...

But judging by this more recent pic, she doesn't seem to care.

The internet even guessed as to where she might be going to eat.

@themeowsterz @DannySaltyani @og_pocahontas yoooo u going to McDonalds with that bag o nickels?? Omfg this pic is a… https://t.co/mBvR7tjGFB
— Fransisco (@Fransisco)1483764961.0

Although, she had a pretty good response to the whole ordeal as well.

And... also revealed the reason her room might be so messy...

And there are tons more girls on the internet making this "sexy selfie in a messy room" mistake...

This self-aware girl posted a selfie in her "gross room," but it doesn't seem that bad?

This girl claims the messy room in which she's taking her selfie isn't hers. A likely story...

At least this girl had the decency to cover most of her messy room with herself.

At least in this one, the clothes and the blinds are different things...

I honestly don't understand how rooms get this messy?

I feel like, if she'd just stood up, we never would've seen that her room was so messy.

I feel like even just closing that drawer would make the room look ten times less messy.

Turns out even Hayley Williams isn't immune from the messy room selfie.

And let's not pretend that only girls are taking selfies in gross rooms.

Of course, none of these rooms are that messy. If you want to see a truly messy room, buckle up.

Imagine taking a selfie in this room.