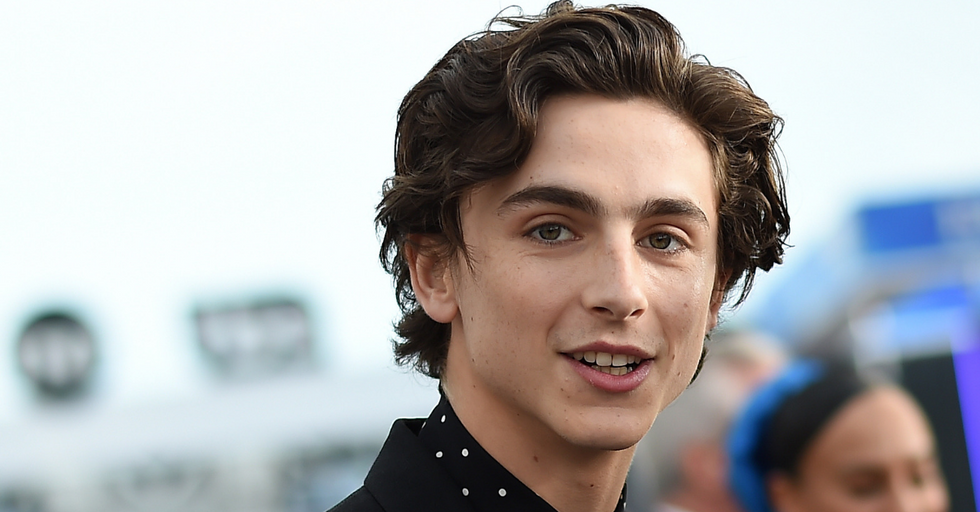 You never know what will happen when you're traveling.

You might end up meeting someone very interesting in the airport security line and forging a life-long friendship! Orrrrr you might end up having your flight delayed and end up trying to spend 6 hours trying to fall asleep in an uncomfortable seat at your gate. It can really go either way. Of course, celebrities have to travel, too. In fact, most of them probably travel more than the average person. And while some of them pay top dollar to sit in first class and hide from the everyday folks in Economy, others choose to sit among the plebs. Apparently, Timothée Chalamet — star of Call Me By Your Name and Beautiful Boy – is one of the latter types of celebs. Or, at least, he was, when a fan found herself sitting next to him.

She shared the whole story in a now-viral Twitter thread. It was clearly very exciting for her.

Air travel is both magical and kind of the worst.

On the one hand, you can be transported to the other side of the globe in a matter of hours by flying through the sky like a bird.

On the other hand, the security lines are kind of the worst.

You'll never feel more like livestock than when you're in line at the airport. And you'll inevitably get stuck behind the ONE PERSON who has decided to wear very complicated shoes, a belt, and who carries all of their change in their pockets.

Once you're finally on the plane, you'll inevitably get your knees smacked by the seat in front of you.

There's no way around it. It's going to happen.

And heaven help you if you have to visit the lavatory.

It's like they asked someone to design the least comfortable bathroom ever, made it just a little bit less comfortable, and then put in every plane in the world.

And, of course, there are the seatmates to deal with.

If you're lucky, you and your seatmates will enter into an unspoken agreement to ignore each others' existence even though you are practically sitting on each others' laps.

Or you might get really lucky, as the woman in today's story did.

This is Alankrutha. She's a Twitter user, a traveler, and — as you're about to find out — a big fan of Timothée Chalamet.

Alankrutha recently found herself sitting next to Chalamet on an airplane.

Y’all nbd just sat next to @RealChalamet on a 3 hour flight and we CHATTED FOR AN HOUR NBD I AM SUPER CALM RIGHT NOW AS EVERYONE CAN TELL
— Alankrutha (@Alankrutha)1549341750.0

Obviously, she was very, very chill about it. Just kidding. She freaked out and tweeted a whole thread about the experience.

She also used a bunch of excellent Office GIFs throughout the thread.

Anyway, ready to hear the story? If so, read on.

To be fair, I always see plenty of tall, lanky dudes wearing hoodies on planes. I wouldn't describe any of them as angels, though.

His response is probably my favorite thing about this thread, just FYI. Of course, he gets that a lot. He's Timothée freakin' Chalamet.

After 1.5 hours, Alankrutha couldn't take the suspense any longer.

I'm guessing Chalamet had probably noticed Alankrutha's super subtle* stolen glances and figured it might be best to acknowledge his super chill** fan. *not super subtle ** not super chill

He didn't try to hide his celebrity status.

Alankrutha obviously had a bunch of questions for him.

List of actual questions my dumb bitch mind asked him that he answered super patiently: 1. Why are you sitting in e… https://t.co/8Qpuk2nefv
— Alankrutha (@Alankrutha)1549369609.0

Personally, I'm bummed that Chalamet has yet to meet Beyoncé. How can we make that happen?

She also shared some of the other things she said to Chalamet.

Like I said. She was totally chill about the whole thing.

What shocks me the most is this dude wanted to know about me. He asked me what I do, what project management is abo… https://t.co/wTRJKbeYQK
— Alankrutha (@Alankrutha)1549369672.0

He actually seemed to enjoy having someone to talk to. That's the exact opposite of what I feel whenever I'm on a plane, but I guess I'm not a celebrity so it all works out.

The two even discussed The Office!

the BEST discussion we had was about THE OFFICE and which episode we love ( I said dinner party represent) and we d… https://t.co/cmGFuV3NNs
— Alankrutha (@Alankrutha)1549369834.0

Oh, man. "Dinner Party" is SO GOOD and also SO BAD.

Chalamet did a little bit of name dropping.

Which, like, how could you not? If I had ever been in the same room as Armie Hammer, it would probably be the only thing I brought up in conversations for the rest of my life.

The two also shared a bunch of high fives, apparently.

And all his questions were super sincere and genuine and he KEPT high fiving/ friendly nudging and while my heart w… https://t.co/sxONYURPK2
— Alankrutha (@Alankrutha)1549369940.0

Is that not the sweetest thing ever? I like living in a world where Timothée Chalamet gives random people high fives.

Eventually, the conversation came to a natural end.

ANYWAY after a good conversation he went back to his music, and I went back to kicking myself hard for actually hav… https://t.co/70KhoLCYxx
— Alankrutha (@Alankrutha)1549369994.0

When the plane landed, the two parted as friends.

The flight landed, we spoke for a bit about his upcoming films, he wished me luck for my career (Idc about my caree… https://t.co/qNJKfkl88F
— Alankrutha (@Alankrutha)1549370027.0

I can't believe no one else recognized him on his trip! That might actually be the wildest part of this whole saga.

Obviously, Alankrutha was basically walking on air at this point.

Actual gif of me walking out of the flight as Timothee, my new best friend says bye and leaves. https://t.co/uXRc9nMqTJ
— Alankrutha (@Alankrutha)1549370069.0

Once again, A+ GIF selection.

Basically, you never know who you might end up sitting next to on a plane.

MORAL OF THE STORY- if you work hard enough and never leave your house, you might stumble upon @RealChalamet on a f… https://t.co/RAPfuXn9TR
— Alankrutha (@Alankrutha)1549370098.0

It might even be an Oscar-nominated celebrity who just happens to have Steve Carrell's number. But wait! There's more!

Alankrutha actually had a few more things to share about her convo with Chalamet.

But also, all of this happened:

Learning that Timothée Chalamet loves Easy A is the best thing that has happened in my day. It's almost as good as getting a high five from him, I would imagine.

Alankrutha also shared this screenshot of a frantic text to her friends:

Right when I was trying to figure out if he was indeed Timothee I panicked and texted my friends + VERY SLYLY liste… https://t.co/yaGfOpshiG
— Alankrutha (@Alankrutha)1549382528.0

Have I mentioned already how totally and completely cool Alankrutha was about this whole experience? She's the very image of calm and reserved.

Here's that selfie she promised:

Idk how one can be this terrible at taking selfies but look out world here I come. Anyway idc just look at his face… https://t.co/71qgC0pxrd
— Alankrutha (@Alankrutha)1549392492.0

So yeah, this actually happened in real life. Good for her! And good for Chalamet, too.

And, to be fair, Alankrutha did draw the line somewhere:

This pure BABY asked me where I watched Lady bird and I said I watched it in the theatre and his EYES LIT UP I CANN… https://t.co/Bxf8KUXmhy
— Alankrutha (@Alankrutha)1549393570.0

Although, something tells me that after you've told someone you've Googled their height, asking for their skincare routine is just sort of expected.

Funnily enough, Alankrutha had actually complained about flying right before getting on this particular flight!

It’s funny, a few hours before I got on this flight, I was complaining about how I never get seated next to anyone… https://t.co/cmkhqXpvIu
— Alankrutha (@Alankrutha)1549464007.0

She certainly wasn't sitting next to someone boring this time.

So, yeah. That happened.

That's the entire thread. It is...a lot. On the one hand, I'm of the opinion that you shouldn't bother anyone on a plane — celebrity or not. But maybe I'm an outlier!

In any case, it seems like Chalamet handled the whole situation with aplomb.

Hopefully, the rest of his trip was uneventful and calm. Share this with someone who's traveling soon!