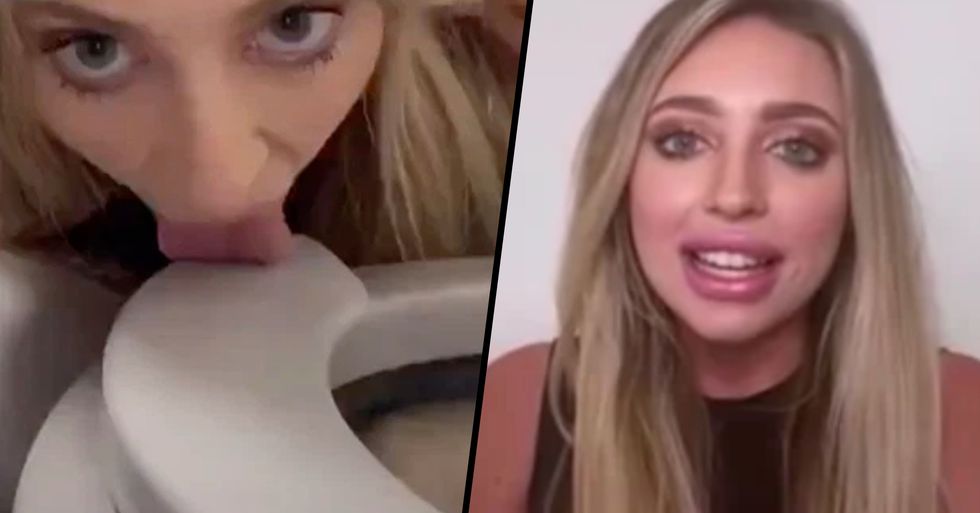 The coronavirus pandemic has left millions in a mass panic all around the world.

But unfortunately, there are people out there who are making fun of the whole situation and by doing this, they are putting lives at risk.

Keep scrolling to learn about the woman who "doesn't care if people die" after she licked a toilet seat...

COVID-19 has been spreading around the globe at an unprecedented rate, but that doesn't stop people from being stupid.

It has been confirmed by Worldometer that 25,272 people have now died globally. A further 559,086 people have been found to carry the virus and be infected.

People have been spotted donning face masks and various other items of clothing and materials in airports in a desperate bid to avoid the virus. However, some are being just plain stupid, as you'll see...

Hygiene is one of the most important things that will protect us from the virus...

And something as simple as consistently washing our hands can make a difference to not only us but to other people around us.

Yet there are individuals out there who couldn't care less about this fact...

And one of these selfish people is Ava Louise.

And although she boasts 175,000 followers on Instagram, her attitude certainly doesn't match her online success.

The young woman was recently traveling to Miami for her Spring Break vacation...

And she uploaded a now-deleted video to her TikTok account that showed her licking the toilet seat on board the private jet she was on, captioning it "Coronavirus Challenge."

Of course, this caused total outrage.

@realavalouiise You started this challenge. There are young people that follow you that are getting sick from follo… https://t.co/FQQgfH6rQU
— Brandy Tyler (@Brandy Tyler)1585148803.0

Ava's video made headlines across the country and she has well and truly become one of America's most hated people in the last week.

But it seems that this hate hasn't phased Ava, at all.

Our beloved Dr. Phil, who is currently self-isolating, did a live-stream video chat with Ava yesterday to try and clear the air.

Meaning she has no idea how serious this matter is. "What the hell were you thinking by licking a toilet seat on an aeroplane on the way to Spring Break when the country has shut down?" Dr. Phil asked the influencer.

Her response is sickening.

"One, I had way dirtier things in my mouth at Spring Break. Two, I bleached [the toilet.] Three, private plane. I flew down on my sugar daddy's plane with my best friend. So really, it wasn't that dirty," she said.

She insisted that nobody was put at risk by her actions...

But Dr. Phil reminded Ava that she herself said that she did it to "remind others that there isn't any real danger surrounding the coronavirus pandemic"... so why did she feel the need to bleach the toilet?

Ava then argued that she has no symptoms of the coronavirus...

"So what's the problem?" she asked.

Ava then admitted that she was annoyed that the coronavirus was getting "more coverage" then she was.

"I was really annoyed that corona was getting more publicity than me because I currently have a song going viral right now and no one was covering it... so I decided to hop on the corona wave."

Ava admitted to acting like a "degenerate" during Spring Break by drinking alcohol and taking drugs...

"My immune system was low, and I should have the virus...  but I don't!" Dr. Phil asked the ignorant young woman if she had any concerns about going outside and enjoying life, despite the fact it could be older people at risk of COVID-19, to which she replied, "No."

Dr. Phil then asked, "If you infect one person that loses their life, is it worth it for you to have this attention?"

To which she replied, "Yeah. I'm hearing you talk and you're like, 'Oh, you're going to kill somebody' like you know what? I'll pull up and I'll cough on you. Like I'm just tired of it! This is ridiculous!"

This woman doesn't deserve our time, but as Dr. Phil said at the end of the interview, it is important to simply ignore Ava's ignorance and to not attack her in any way.

You can watch the second part of the interview here...

And remember, practicing good hygiene during these difficult times is of the utmost importance and it can save lives. Keep scrolling to learn about the woman who deliberately coughed all over a supermarket's fresh produce counter...