Leave the tricks to the pros. | 22 Words 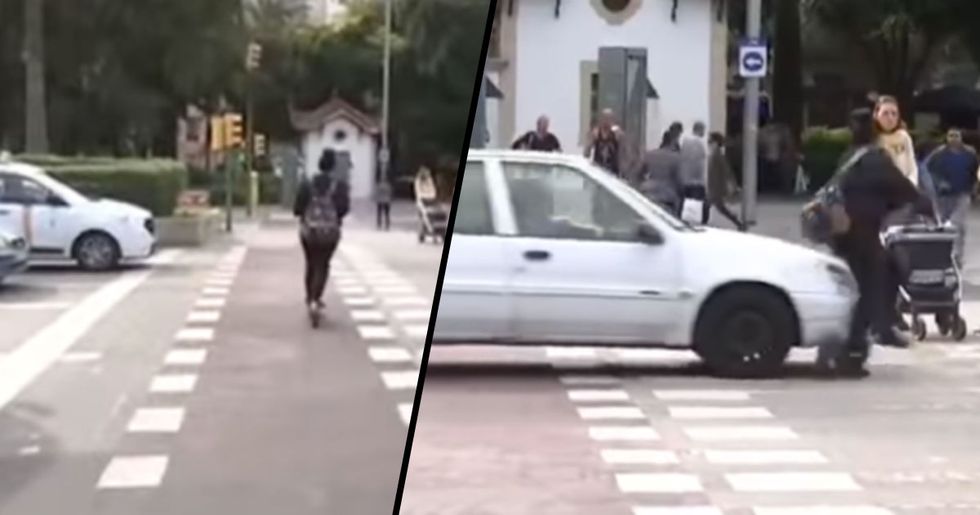 Riding an electric scooter through city streets has become the latest trend.

That being said, the speedy, silent mode of transport has come under some controversy.

Whilst on one side some see the value of the eco-friendly mode of commute, others are worried about the dangers.

This has led to cities across the world hastily coming up with new regulations for scootering.

In a hilarious viral video, a woman who is being interviewed complaining about new safety regulations gets hit by a car.

The rise of the electric scooter.

Over the past few years, electric scooters have really taken off.

From Hamburg to Paris, Barcelona, and Berlin, most weekend-getaway cities have jumped on the electric scooter hype.

In most landmark cities you can now hire out electric scooters just like you can with bikes. Of course, the difference is, you can reach surprising speeds on an electric scooter...

vs the reality of stepping on an electric scooter for the first time.

The thing is they really can go faster than you'd think.

According to some people, electric scooters are too dangerous to be invading city streets.

But they're so fun!?

Finally rode one of those public electric scooters and let me tell you.. it was really fun and better than walking
— Sarah Stone (@Sarah Stone)1572826900.0

Or at least more fun than walking...

Leave the tricks to the pros.

I mean so long as you don't attempt anything crazy like a mid-scoot backflip, you should be fine, right?

Trust me, as soon as you try out one of these bad boys and start increasing your speed you'll get carried away.

Most big cities have scooters now.

Available to hire outside train stations, busy public spaces and near big landmarks, electric scooters are well and truly becoming a thing.

Clearly life has just got a little bit more fun...

There are some concerns about the growing number of incidents involving drunk tourists taking out these speedy machines and wreaking havoc in public places.

Cities are cracking down.

Rules and regulations are being put into place around the world detailing how the public should behave whilst cruising around on electric scooters.

One commuter in Barcelona wasn't happy about the new rules.

When asked by the interviewer what the new rules meant for scooter users, she explained: "You can't go anywhere unless it's a cycle path or ACIRE (zones of restricted vehicle access.)"

In defiance with the rules restricting electric scooters to cycle paths, the girl proceeds to scoot along a busy crossing.

In what could have been the perfect end to the video interview, the girl seems to glide away.

Just before the scooter user could safely reach the other side of the street she gets knocked down by an oncoming vehicle. I guess that's what the rules are there for...

You can watch the full video below...

This really could be the viral video of the year. Continue scrolling for another video of instant karma, wherein a man tries to kick a dog and gets what's coming to him.