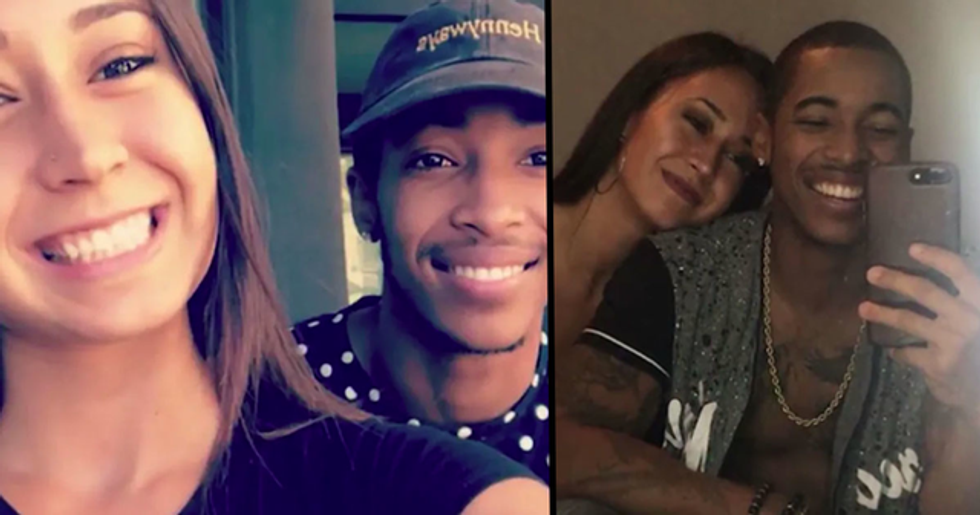 There's nothing quite like paranoia. Once you've set your mind on something, it can seem that any piece of "evidence" you find only confirms your theory. But imagine having all of your suspicions confirmed; imagine finding out that you were right all along, and then finding out something even more shocking...

Such was the story of one woman, who became so convinced that her boyfriend was cheating that she felt she just had to catch him in the act. And let's just say, her method was a little unorthodox.

She hired a glamour model and certified hottie to catch her boyfriend. But the plan spun out of control and what happened next is something truly astounding. We've got all the pictures here, plus the internet's priceless reaction.

There's nothing worse than a secret suspicion.

Feeling like someone's trying to hide something from you has to be up there as one of the most irritating feelings in the world.

Plus, once you start to have that feeling, something strange seems to happen.

Every little thing that you discover seems to serve as irrefutable proof that you are totally right!

It can be tempting to take action.

Undertaking a personal investigation can sometimes seem like the only way to get to the bottom of your theory.

And it's even worse if the object of your suspicion is your significant other.

The most common suspicion?

It's got to be unfaithfulness. The fear that your partner has had their attention caught by another is many people's worst nightmare.

Social media has only exacerbated the problem.

With an abundance of ways to see and get into contact with ridiculously attractive people (sure, sometimes it's down to facetune, but who's to know?), it seems like it's harder than ever to maintain an honest relationship.

Which can lead to some arguments.

How would you feel if your significant other was liking a lot of Instagram thirst-traps? It's hard to deny that it would hurt your feelings.

And this is where we introduce the story that came to light this week. You're not going to want to miss this crazy rollercoaster of events.

This is the couple in question.

Alysha Bush and Kourbine Lee, both twenty-three years old, were in a long distance relationship for eight months.

But Bush became suspicious of Lee.

She believed that his behaviour on Instagram was indicative of a bigger problem. She thought that his head was being turned by other women.

So she came up with a plan.

She decided to "hire" a woman to act as a honey-trap, to trick her boyfriend into being unfaithful. The woman in question? Paula Contento.

The two came together to trick Lee.

Contento, who was a member of Lee's gym, would approach him to see if he would actually cheat on his girlfriend.

And she did all that she could to tempt him away from his significant other. The results were not what Bush had hoped for.

At the end of the date, Lee had indeed been tempted. The pair ended up hooking up.

The results of this indiscretion were far-reaching.

In fact, it was the nail in the coffin of Lee and Bush's relationship, and the pair ended up splitting up.

This had pretty crazy consequences.

Contento and Lee actually ended up starting a relationship of their own - which we can imagine was pretty hard for Bush to see.

We bet she regretted her decision to trick her boyfriend.

After all, it was her plan which had pushed her boyfriend straight into the arms of another.

But there's another twist to this crazy story.

Keep on reading to find out the insane ending to this convoluted tale.

Her plan had very much backfired.

But not in the way she'd entirely expected. In fact, there was a double agent at work here.

The pair reunited in quite an unusual way.

They decided to appear on the Snapchat show, Second Chances, a show that reunites broken-up couples to see if the spark is still there.

And was on Second Chances that the tale unraveled.

Bush decided to come clean to Lee. And Lee insisted that he'd never been unfaithful to Bush, with Contento or anyone else.

Are you ready for this?

Bush decided to call Contento to confirm the story - but she ended up getting a whole lot more than she bargained for.

Because Contento had a shocking revelation to make.

She admitted, to Bush, to Lee and to all the cameras, that she had made the whole thing up.

Her excuse was that she thought that Bush wasn't good enough for Lee.

She had taken it upon herself to tear the couple apart. Lee was faithful after all.

Bush had wanted to know whether her relationship was worth saving - and it seems that she got her answer...

The whole thing was pretty insane.

And the relationship was torn apart for no real reason.

After finding out about what really happened, Bush and Lee decided to give things another go - but the relationship could never recover from the many layers of deception.

The real reason that the relationship failed?

Lack of communication. Instead of talking to her boyfriend about how she was feeling, Bush, instead, came up with an sneaky plan with a total stranger...

We hope she's learned from this.

Use honeytraps with extreme caution. Also, if you can't talk to your boyfriend about anything and everything, then maybe that  should tell you everything you need to know about your relationship.