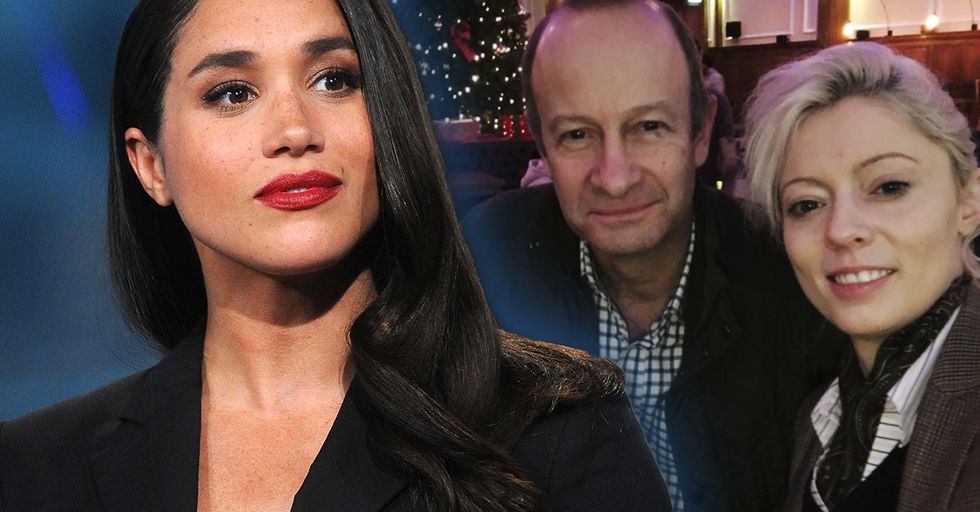 Less than a week after Donald Trump derided South American, Caribbean, and African countries as sh*tholes, our lovely neighbor across the pond has also thrown it's hat in the ugly racism ring.

By our lovely neighbor, I mean Britain, and by ugly racism, I mean racist, classist texts against the soon-to-be black British princess Meghan Markle.

Lots and lots of them.

We all know Meghan Markle. She used to be an actress on the long-running TV show, Suits, but she gave that all up to marry Harry (the real life British prince – NOT that phony replacement those reality TV producers tried to fool people with).
The news of the relationship was mired with racist controversy from the start, with British newspapers using racially coded language to describe Markle, who is biracial. It got so bad, Harry even had to put out a statement condemning the press.

Then, of course, there was all that brouhaha Christmas 2017 when one of Harry's relatives, the reviled Princess Michael of Kent, wore a racist blackamoor brooch to meet Markle for the first time.

This weekend, things got a bit more intense when British far right leader, Henry Bolton and his girlfriend Jo Marney, a 25-year-old model, waded into the morass. Bolton, 54, is the leader of the populist right-wing UK Independence Party, the party seen as largely responsible for the Brexit movement, which resulted in the United Kingdom breaking away from the rest of Europe.
The Mail on Sunday revealed that Bolton's girlfriend, Marney, who he'd left his wife of five years for, had been making a series of racist and classist texts which derided Markle as a "royal yank." It's not half as bad as the other things Marney goes on to say, however.

From Mail on Sunday. Some of the comments that UKIP leader's girlfriend is said to have made about Meghan Markle… https://t.co/RuULMkKCcw
— Mike Smithson (@Mike Smithson)1515884028.0

When asked why she doesn't like black people, she texts, "Ugly. Not my thing. They don't turn me on. Harry's marrying. God." Wow, tell us how you really feel.
Marney then goes on to say that Markle's "seed will taint our royal family" and that she's "just a dumb little commoner. Tiny brain." She also states, horrified, "Next will be a Muslim Pm. And a black king."
This, by the way, is the same woman who once called London a "shanty town" because of all the "foreigners bringing their customs over here." She also called the  women who accused Harvey Weinstein of sexual harassment and assault "whinging little divas." Lovely person.

ZERO parliamentary seats and endless scandals relating to racism, misogyny and violence, but it's somehow the place… https://t.co/amKirtXdFR
— Will Black (@Will Black)1516024655.0

In response to the outrage that erupted over the comments, Marney has apologized, saying,

I apologise unreservedly for the shocking language I used. The opinions I expressed were deliberately exaggerated in order to make a point and have, to an extent, been taken out of context. Yet I fully recognise the offence they have caused. No offence was intended and, again, I apologise unreservedly for any such offence or hurt that my messages have caused to members of the public, members of Ukip my friends, family and loved ones. I have disappointed them all and let myself down. I cannot sufficiently express my regret and sadness at having done so.

Umm, so where in there does she actually apologize to Markle?

I like the way Jo Marney uses the "taken out of context" defence. In exactly what context could such vile comments be acceptable?

In any event, Marney has been suspended (which means jack squat) and so many people are calling for Bolton's removal, he's made all sorts of apologetic noises (that also don't mean jack squat) including, "I don’t defend these comments whatsoever," and the "romantic side" of his relationship with Marney is over. "At the moment it is obviously quite incompatible to continue the relationship," he further added.
However, Bolton notes,"I’m going to be continuing to support her family because Jo is absolutely distraught by this." Right.

So let me get this straight. A 54 year old political leader whose party champions the worst, most xenophobic British impulses leaves his partner of 12 years (they were married for five) for a woman 30 years his junior, but the minute it comes out that she's as hateful as he is, he throws her under the bus to save his political career? That's just cold.

All this just goes to show – England always wants to pooh-pooh America for its racist tendencies, but point of fact, England's always had a leg up. As a reminder, they conquered and enslaved other countries for centuries under the auspices of the British Empire, and now want to be shocked that the very people they forced from their homelands now consider Britain their home. I literally don't know what else to say, so I'll leave you with this excellent analysis by Trevor Noah: