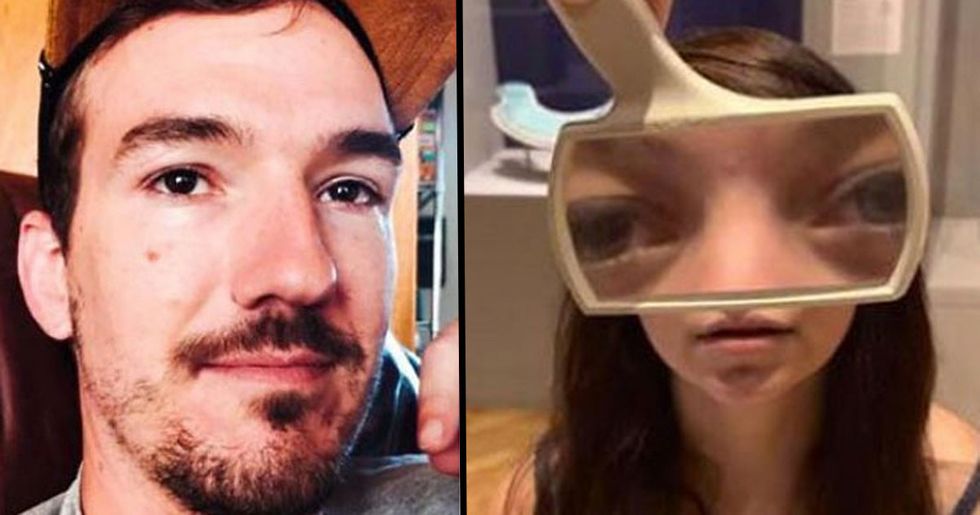 There are many unfair stereotypes about boyfriends out there. Many of them have plenty of nice qualities, and aren't (totally) deserving of the "men are trash" reputation that they get online. But if there's one area in which boys do consistently mess up, it's taking a picture of their girlfriends.

Now women of the world have decided to unite and are using social media to share comparisons between pictures that they take of their boyfriend and the pics that their boyfriends take of them. And if you needed any more convincing that getting your guy to take a shot for your Instagram is a total waste of everyone's time, get scrolling.

Honestly, it looks like he wasn't even trying to steady the camera here.

Which seems to be something of a theme.

Literally, why can't these guys manage to hold a camera still for a couple of seconds?

Going for dinner seems to be a typical setting for these snaps.

While boys get to be cute and gaze out over pizzas, girls better watch out when they try to sneak a mouthful, lest they get papped by their S.Os.

Or is it (as we suspect) that boys simply cannot be bothered to make an effort?

Or how about these?

The left is 100% travel brochure, while the right is more America's Favorite Home Videos.

Our old enemy, the "shoving food into the mouth" portrait, strikes again.

The contrast is intense.

There's romance, longing, and desire in the first picture. The second is just a series of unfortunate events.

Why can't boys resist pulling out a camera the moment that a girl starts munching her food?

You have to wonder what these guys were trying to achieve.

Did they really think that the blurry image including a towel turban was about to be Instagram-worthy?

At least with this, we can see the intention.

Although the intention was still to take an unattractive picture of a partner - so hardly an act of kindness.

But this one has the added bonus of being incredibly poorly lit.

How about, as a rule of thumb, we never take photos of each other eating?

Honestly, her t-shirt says it all here.

On the left, we have a professional-looking headshot. On the left, something resembling a still from a horror movie.

What does a girl have to do to get her boyfriend to wait until she's ready??

The girlfriend images? Nothing short of bizarre - and ready to be immediately deleted.

It almost looks as though the boyfriend snapped his image just as his girl was mid-falling over.

Boys tend to favor images that are dark, blurry, and, most importantly, where their girlfriends are eating.

It's not just the way their girls look, though.

It seems that boys haven't quite grasped the concept of getting a beautiful background into a shot, instead, clumsily framing whatever they see fit.

Because it's not just the fact that the girls don't look their best.

It's also the fact it appears that girlfriends have the unique knack of capturing their boyfriends at their most adorable.

Even if they claim to be candid.

Maybe there's something about the fact that their girlfriends are behind the camera that brings out these guys' most adorable smiles.

Whereas, when the one behind the camera is the boyfriend?

Well, it becomes immediately clear where their focus lies.

Although some of the snaps are just bizarre.

For example, this set, where it looks as though the boyfriend must have simply dropped the camera.

Although some in the tag don't exactly make sense.

Such as this one, which appears to be two selfies. It's hard to blame the poor photography on someone else when the camera is in the pic, right?

Although some aren't as bad as others.

Like this one. Sure, it's cropped a little awkwardly - but it's lit properly, in focus, and she doesn't look totally taken by surprise!

Sure, she looks a little goofy - but also, pretty cute. Anyway, it's hard to concentrate on either person when there's so much delicious food around.

Restaurants do seem to be a major culprit.

So, if you're ever out for dinner and your S.O. asks to take a picture of you, you have been warned.

Especially because of this.

A boy will have the cheek to ask you to retake the snap if they're not happy - and then respond by snapping an absolute atrocity.

So, what have we learned?

Boyfriends may have many good qualities - but their qualification as a professional photographer is likely lacking. But hey - that's what girlfriends are for!