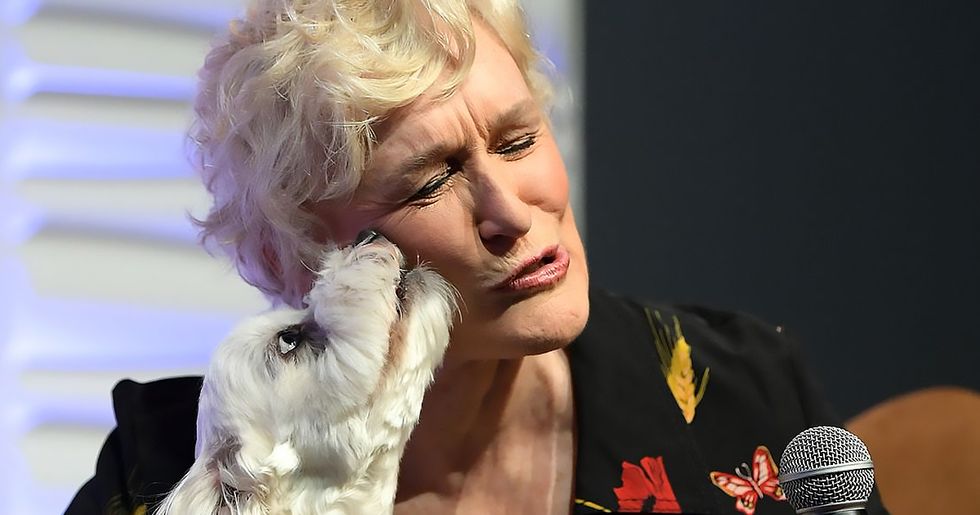 Acclaimed actress Glenn Close has recently taken up her next, and perhaps most culturally significant role to date: that of an Instagram influencer. Close's adorable Havanese pup, Pip, has his own Instagram account, and his star is rising every single day. And for good reason. The content on Pip's account (@SirPippinOfBeanfield, of course) is on another level. It is simply transcendent. Pip lives a life that pets everywhere can only dream of. Pip is a star, and both he and his owner (who is award-winning actress Glenn Close) know it.

As you may be aware, Glenn Close is having quite the award season.

She was nominated for basically all the awards for her performance in The Wife, and she even snagged the Golden Globe for it. But more than that, Glenn Close is a winner in all of our hearts.

And also in the heart of her adorable Havanese, Pip.

I might argue that Glenn Close's most significant achievement of the past year is the revival of the Instagram account for her dog Pip, also known as Sir Pippin of Beanfield.

However, it seems that after posting a few adorable pics of this perfect pup, it looks a pretty long hiatus.

And now, Pip's star is rising, as it always should have been. The account bio describes Pip as "The only son of @glennclose. Excellent nose. International traveler. Student of the human condition. Fetch artist and mini-ball catcher extraordinaire!"

Pip is definitely Glenn Close's dog, that's for sure.

And we are so excited to follow him on all his adventures and look at all his posts, which we are pretty sure are curated by Glenn Close herself.

Of course, no Instagram account for Glenn Close's dog would be complete without some shots of the master herself.

Is the concept supposed to be that Pip took this photo? Dog's can't take photos. They don't have thumbs!

Pip with a Pearl Earring

When I told you that Pip's account was full of gold, did you think I was lying? Because clearly, I was not lying.

Here's Pip hanging out in the green room of the Public Theatre, waiting for his mom (actress Glenn Close) to come back for intermission.

If you look at this photo very closely, you can see the costumed ghost of Glenn Close taking this pic of her precious pup.

Here, Pip is in Park City, Utah for Sundance, taking in the majestic, snowy view. This is a well-traveled pup.

Pip is looking to jumpstart an acting career of his own. According to him, however, his scene was cut from The Wife because his accent was hard to understand.

This video from Pip's early days is too precious not to watch. He was so extremely cute when he was a tiny puppy.

If you think Pip isn't accompanying his mom (acclaimed actress Glenn Close, and no, I'm not giving up this bit any time soon) on The View, well, you've got another thing coming.

Here, Pip and his mom (Glenn Close, who once played Cruella DeVille, clearly a stretch) are on their way to Colbert, where Pip will hang out in the dressing room.

Look at Pip's face. He is so very proud of his owner, award-winning actress Glenn Close, for all her success.

It almost looks like Pip himself won a Screen Actors Guild Award. He couldn't be more proud if he tried.

Pip is one of the busiest dogs in the business. He's always jet-setting around with his owner, legendary actress Glenn Close.

Pip loves to go to the ballet. Oh, he has no idea what's going on on stage but there's nice music and it's dark and he can take a nap.

Here, Pip poses with one of his mom's (actress Glenn Close) co-stars in the play Mother of the Maid, Dermot Crowley.

Pip is a great traveler. He curls up in his carrier and goes right to sleep. Scroll for the progression of cuteness.

Pip is getting so famous that he's now been the subject of some fan art! Honestly, he deserves all the success he gets.

In case you were wondering, here's the totally fun, light caption that goes with this photo: "I will not let myself acknowledge the cheap laughter. I will maintain my dignity. I will continue to stand at attention. I will not blink. Meanwhile, they’ll never know what ill winds are blowing across the chilly hills and valleys in my mind’s eye. Even this, too, shall pass. But you’ll still roast in hell."

Occasionally, I think famous actress Glenn Close forgets to toggle to her own personal account and accidentally posts genuine pictures like this one of her and Melissa McCarthy on Pip's account. It makes it even better.

There are a lot of people in this photo, but where does your eye go first? Right to Pip? Yeah, thought so. He can't help being the center of attention.

Sometimes the captions are *Italian chef kiss*: "Ok, have your fun at my expense! Whatever makes you happy, this time of year is fine with me! Even though you now owe me treats in perpetuity...and you will still burn in Hell!"

Again, I think Glenn forgot to switch over accounts, but this is what makes Sir Pippin of Beanfield so worth following! You never know what you're going to get!

Pip may be a worldly dog, but he's still a dog, and he doesn't care for the sound of fireworks during New Year's Eve celebrations.

But overall, he's such a happy boy, and not just because he lives a life of luxury as the pet of acclaimed actress Glenn Close.

He's a star in his own right, too.

Go follow Pip and make your day brighter! Then share this with someone else to spread the love!