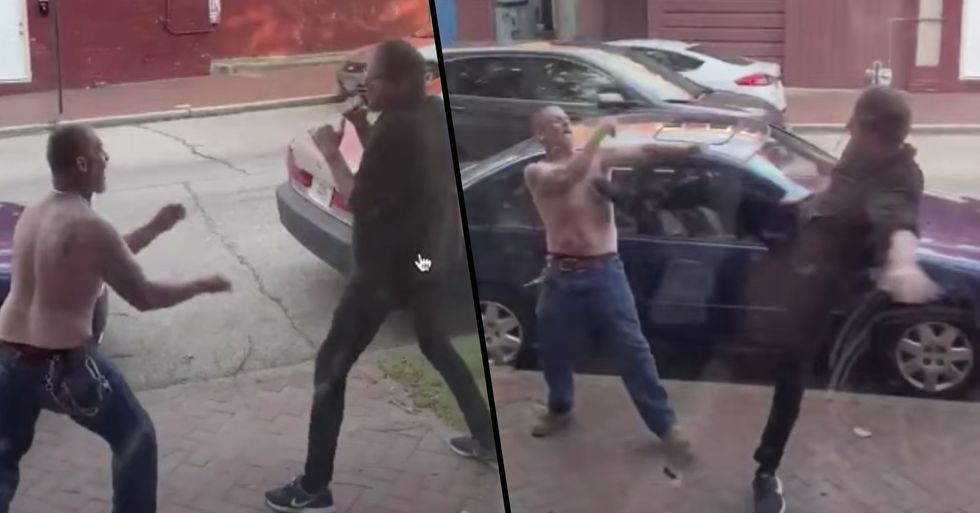 Jeff Goldblum is trending on Twitter after a video went viral of a man showcasing some insane Street Fighter moves in an altercation with a shirtless man on a sidewalk.

And now Twitter users are raising money for Goldblum after the video went viral, although not all is as it seems.

Keep scrolling for one of, if not the best roundhouse kicks you've ever seen...

So far, Jeff Goldblum has been one of the less problematic figures in Hollywood.

But hey, 2020 has been throwing all kinds of things our way, so why wouldn't he be part of a street fight gone viral?

Before all of this, Jeff couldn't do anything wrong in the eyes of his adoring fans.

The actor has been intriguing audiences for decades now, with his famously peculiar speaking cadence and natural good looks quickly gaining him a loyal fanbase.

He has starred in a number of Hollywood blockbusters...

The Fly, Independence Day, and Thor, just to name a few.

But most of us will know and love the actor from the 1993 classic, Jurassic Park.

Who can forget his portrayal of the intelligent Dr. Ian Malcolm in the Jurassic franchise?

Or simply this iconic photograph?

Which you may know from one of the thousands of memes currently circulating the internet...

And, on top of his skills as an actor...

Jeff has also been loved for his down-to-earth character, which can be credited to his humble beginnings.

The actor has always remained proud of his roots...

And has publicly discussed the odd jobs he used to work in order to make ends meet prior to his big break, such as selling pencils to prisoners in California.

He is also part of a jazz band.

Jeff is part of an ensemble jazz group, the Mildred Snitzer Orchestra, that meets in various music venues across LA on a weekly basis. Here, the actor is known for mingling with the crowd and chatting to customers during these semi-regular gatherings.

After all that, I know what you're thinking...

Jeff Goldblum is a god damn national treasure... am I right?

Well, he's has been the talk of the town recently, after a video has surfaced of two men brawling outside an apartment.

Jeff Goldblum began trending on Tuesday after the video caused quite a stir on Twitter.

Except it wasn't what you think...

The tall, thin man wearing glasses appears to be Goldblum's double.  He can be seen laying some pretty impressive moves on a shirtless man, who "deserved it," according to the guy who posted it.

The neighbor, Leo Senpai managed to capture the fight on his phone. He seemed pretty nonchalant about the whole ordeal.

Leo Senpai wrote: "He started it, before this, he was yelling at glasses guy calling him every racial slur too, the shirtless man threw the first swing as well. And literally anytime I've ever talked to him he always says disgusting things towards women."

According to Senpai, the shirtless guy said "some rapey s--t" about a woman walking down the street, which upset the "skinny dude."

Senpai added: "The reason this ass whooping was dished was because he joked about 'oh I could just hog tie her up.'"

The brief but action-packed clip shows the pair sizing each other up.

The shirtless man appeared to be totally out of his depth, while fake Jeff Goldblum looks like a poised, trained professional ready to strike. It's no wonder people were confused.

Just when you think the fight's over, Jeff lands a solid kick right to the ribs of the guy who started it all off.

The swift kick to the liver appears to end the brawl, but a second video has emerged of the extended version, leaving everyone worried about fake Jeff's safety. Watch them both below...

It was round 2 that ended it all.

"After all this shirtless dude had a round 2 but with a 2x4 then cops were called BUT shirtless got broken ribs and nose, and roundhouse kick man got a broke arm," he posted.

Followers were quick to point out the similarities with the "skinny dude" and the real Goldblum.

One wrote, "Jeff Goldblum just beat the piss outta Tiger King’s first husband," while another commented: "Is there anyone or anything Jeff Goldblum can't defeat? Dinosaurs, Aliens, the hassle of finding a new apartment and now shirtless street creepers!"

After all the publicity, people are lending a hand to fake Jeff Goldblum...

I just talked to Jeff doppelgänger and he doesn’t want to on video being interview but he appreciates everyone supp… https://t.co/Gdy2LrnOLK
— Leo Senpai 🔪 (@Leo Senpai 🔪)1589310640.0

It's been reported that the look-a-like suffered a broken arm due to the fight, and is receiving a little help from fans on Twitter to pay for the damages inflicted on him during Round 2 of his melee with the shirtless man.

A day after the battle royale, he tweeted, "Alright everyone I made a gofundme to help pay for medical bills/get him a deserved beer so please if you would like to help any and all proceeds will go to my neighbor."

"It is impossible to get coverage for because it happened during his service with the marines, the military has refused to cover the medical bills that requires prosthetic dentistry even with his honorable discharge!" His statement read.

Check out the video of round 2 below...

Keep scrolling for more crazy celebrity fights, this time it's the Kardashians, and Scott Disick is understandably concerned...