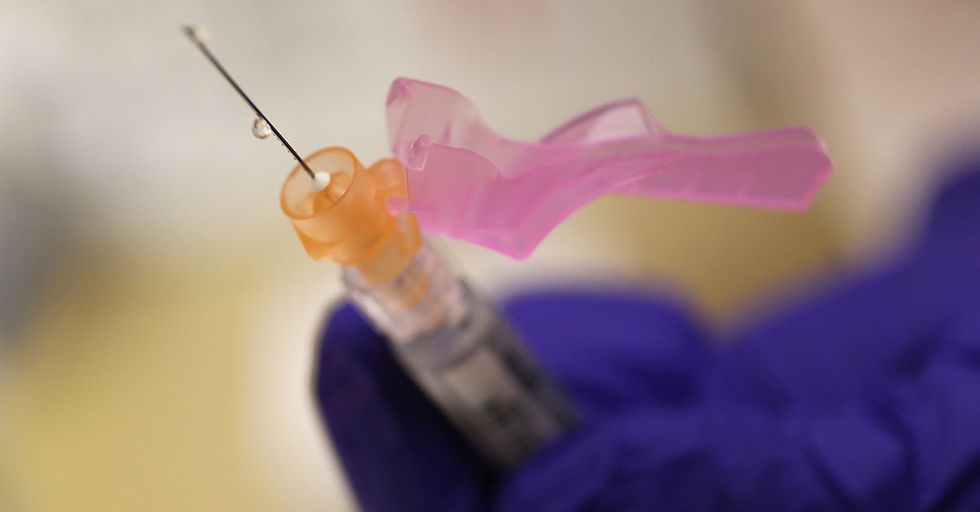 GoFundMe Just Banned Anti-Vaxxers From Raising Money on Their Site

Anti-vaxxers are in the news again, and not because the measles is back (there have been more than 260 cases reported, spread over 15 states, according to the Center for Disease Control and Prevention.)

No, not because of that. They are in the news because the popular fundraising site – GoFundMe – has banned anti-vaxxers from raising money for their "conspiracies." The Daily Beast says, "activists have raised more than $170,000 for their anti-science message." GoFundMe is just one of several popular sites cracking down on these activists who claim that the government is trying to hurt American children by administering and pushing vaccinations.

A spokesman for GoFundMe told The Daily Beast that "campaigns raising money to promote misinformation about vaccines violate GoFundMe’s terms of service and will be removed from the platform." Dayum. Looks like these activists will have to find a new home to lurk at.

GoFundMe is a legit site used to fundraise money for people in need.

According to their website, "GoFundMe is the #1 and most trusted leader in free online fundraising. We built our reputation by serving and supporting our community every step of the way."

The fundraising site has been around for eight years.

And has a number of success stories. And any donated funds are eligible for immediate use from the donor – there is no waiting period or start-up fee, which is why so many use this platform to raise money.

According to the site, "just the first 30 days following Hurricane Harvey, GoFundMe delivered over $27 million directly to people affected by the storm."

That is just one extraordinary example of why this site exists – to help others when they need it the most. And it doesn't always have to be due to natural disasters or health issues, sometimes people start a fundraiser for a low-income family or a single parent.

When a person starts a GoFundMe page, it's usually for a need.

Sometimes family or friends create a page to help out a loved one. I have contributed to several GoFundMe pages, and it truly is an amazing platform.

As with anything, there are always those who abuse the system.

And raising money to support a movement, such as the anti-vax movement, does not seem like a legit cause. Sorry to say.

The Daily Beast found fundraisers that promoted and/or benefited by anti-vaccination groups brought in "$170,000 in the last four years."

Wowza, $170K! Where did all this money come from you might ask? Good question. Let's take a look...

Larry Cook runs the "Stop Mandatory Vaccination" group, which apparently is nonprofit. However, all donations go directly to his bank account (nothing fishy there) and his website actually says the donations “may be used to pay his personal bills." Say what now?!

$25,000 was raised by a vaccine-exemption attorney’s legal defense fund.

That was promoted by Health Freedom Idaho and Sarasota for Vaccine Choice, says The Daily Beast.

Another was a Facebook page titled, A Voice for Choice, that raised almost $40,000.

"Tara Smith, professor of epidemiology at Kent State University, praised GoFundMe’s ban, but said she suspects the anti-vax movement will find other ways to raise money and spread its message." And indeed, they will.

GoFundMe does have terms & services that not everyone abides by.

GoFundMe’s terms of service bans donations toward “products that make health claims that have not been approved or verified by the applicable local… or national regulatory body." Bans = not allowed.

Surely this ban will put a damper on these "activists".

However, Mashable reports that "anti-vaccine groups were fundraising through Amazon’s charity program, AmazonSmile." So, yes, they found an alternate way. SMH.

Amazon has also removed anti-vaccine documentaries that were once available from the company's Prime Video streaming service.

This removal occurred after a US lawmaker urged the popular site to "crack down on the content" it sells.

US Rep. Adam Schiff sent a letter to Amazon's CEO about the e-commerce giant promoting products and content from the anti-vaccination movement.

Shortly thereafter, the documentaries were removed from the streaming service; however, the DVD versions are still available for purchase on the site, as well as some books.

With the measles outbreak in the news, social media sites are firming up their policies.

According to Mashable, "In February, Pinterest blocked anti-vaccination-related search queries from its platform."

The ultra-popular video-sharing site, YouTube also made an announcement about pulling anti-vax mumbo-jumbo.

YouTube announced that it would "pull advertising from videos that espouse anti-vaccination conspiracy theories, according to BuzzFeed."

And of course, Facebook has chimed in on this, releasing a press release on anti-vax propaganda.

“We are working to tackle vaccine misinformation on Facebook by reducing its distribution and providing people with authoritative information on the topic," wrote Monika Bickert, vice president of Global Policy Management.

And is “exploring ways to share educational information about vaccines when people come across misinformation on this topic."

Don't forget that someone actually pays a price to run a Facebook ad. Those ads aren't free.

Like Larry Cook, who supposedly spent "$1,776 in the last nine months" to boost his posts on Facebook.

And not only that, Cook’s Facebook ads can bring money to him in another way - by pushing traffic to his website.

It's understandable why Facebook has removed these ads. From the words of Dr. Tara Smith, “these [stories] really frighten parents, and when they get shared, they increase parent fear and anxiety regarding vaccination."

This is a wise decision for these social sites to make. After all, nobody wants to take the blame for spreading the measles.

Except for maybe the anti-vaxxers who refuse to get their children vaccinated, and are willing to risk the safety of others.

This clearly is a threat to public health.

Which is why these large social sites are taking action. Measles – at one point in time – was completely eradicated, thanks to modern science.

Before the measles vaccine was introduced, more than 2.6 million deaths occurred each year due to the virus, says the (WHO) World Health Organization.

"Measles is one of the world’s most contagious diseases. It is spread by coughing and sneezing, close personal contact or direct contact with infected nasal or throat secretions."

Young children are most at risk for contracting the measles.

"Unvaccinated young children are at highest risk of measles and its complications, including death," says WHO.

It seems this is a public health battle between those who vaccinate and those who do not.

And if you are a parent with young children, the best thing you can do is be informed, listen to your pediatrician – and remember that there is no antiviral treatment that exists for the measles virus.

Instilling fear into parents is a way that anti-vaxxers have been able to survive.

The Daily Beast reports, "Cook makes clear on his website that he is using the children’s deaths to fuel fundraising." That is very appalling!

And as Dr. Smith states,“I don’t blame these parents, but I do blame people like Larry Cook who take advantage of grieving parents."

Who can argue with this? When a tragedy happens, it is normal to want answers. And there are always individuals who are willing to prey on those that are in a delicate state.

As Mashable says, "There's more to be done in this public health battle, but changing algorithmic recommendations, and cutting off funding sources for these viral videos is a start."

Vaccine hesitancy affects more than just one family, it affects society as a whole.

In fact, The World Health Organization recently categorized "vaccine hesitancy" as one of 2019's top threats to global health.

But this fear is causing a once eradicated virus to have made its ugly return.

And if we do not listen to what doctors and scientists urge us to do for the safety and well-being of our children, then we definitely have more to fear. Because measles is just the start of what else could potentially return.