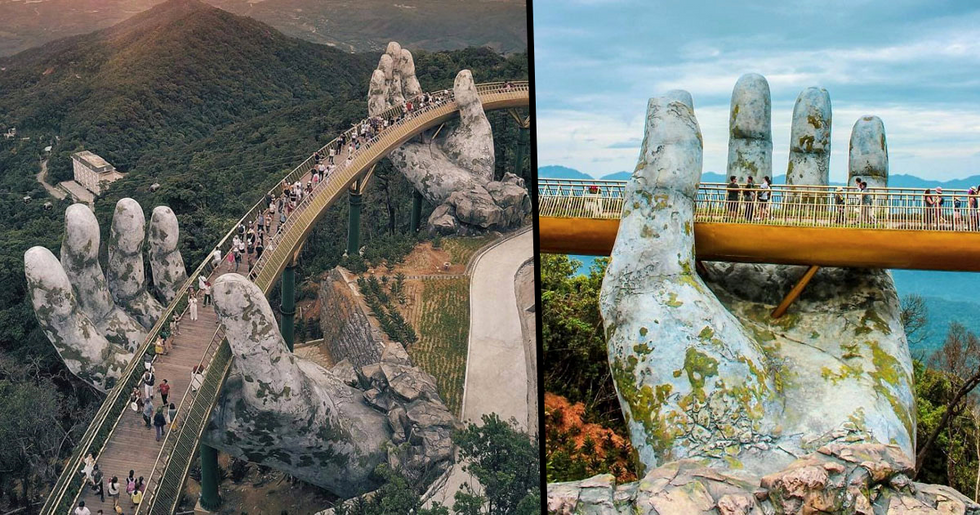 If you are a fan of unusual architecture and stunning scenery, then you should definitely visit the Golden Bridge, situated just outside Da Nang in Vietnam.

This bucket-list bridge stands above the Ba Na Hills and with its giant stone hands that appear to hold up the entire structure, it wouldn't look out of place in the realm of Mordor.

Since it was made open to the public last year, thousands of tourists have flocked to enjoy this unique bridge and take endless selfies of themselves on this Insta-perfect attraction.

And this isn't the only show-stopping bridge we've found! Prepare to be amazed.

The Octavia Frias de Oliveira can be found in Sao Paulo, Brazil and although it is only 138 meters high and 900 meters long, its curved design features make it an incredibly imposing sight. Not to mention the fact that at night it is lit up with LED lights to help keep drivers safe and different colours are used to celebrate special occasions in the city.

However it is actually called the Webb Bridge and can be found in Melbourne, Australia. The idea behind this dynamic bridge was to encourage visitors to walk and cycle through it, enjoying the extraordinary architecture as they journey through.

Continuing the animal theme, this one has been designed to look like a dragon.

The dragon is a very revered creature in Asia as it symbolises power, prosperity and nobility. This highly decorative bridge stands at over 2,000ft tall and every Saturday and Sunday evening it actually breathes fire!

This one is more than a bit Rock 'n' Roll.

The Rolling Bridge in Paddington, London attracts crowds of tourists who all want to see its unique way of letting boats through. Rather than the usual way of parting in the middle, this bridge rolls up instead. Apparently the designers were influenced by the animatronic dinosaurs in Jurassic Park when they came up with the concept.

This one's got us all tied up in knots.

Lucky Knot Bridge in China is so weird and wonderful at the same time. A combination of its bright red colouring and the mass of knots that appear to have no end, make it a truly fascinating structure. It is often refereed to as a Mobias ring as it's a never-ending shape.

Have we taken a wrong turn and ended up in LEGOLAND?

Nope, we are in Germany where the Lego Bridge or Lego-Brucke can be found. This playful design was the idea of street artists Megx who was inspired by his daughter's love of Lego. It certainty brightens up this street on a dull, winter's day.

The U.S is home to one of the highest suspension bridge in the world (it gets beaten by the Beipan River Guanxing Highway Bridge in China).

Suspended at an epic 1,053ft high, the Royal Gorge Bridge goes over the Arkansas River in Colorado. It is an extremely popular attraction in America with visitors keen to enjoy the sensational view. There is even an amusement park at both ends of the bridge!

Also known as The Helix Bridge and formerly known as The Double Helix Bridge, this futuristic structure acts as a pedestrian passage to link the Marina Centre with the Marina South. The bridge has four different inner spirals that are used to create shade for walkers in the day and better still, it is lit up at night for a truly exciting experience.

We're on the road to nowhere.

The Elastic Perspective in The Netherlands is a truly revolutionary structure as the appearance of the bridge changes depending on the perspective of the visitor. Confused? Basically the steel is designed to fold in on itself, which creates the feeling of a never-ending loop. It has to be seen in person to be believed.

It's the parting of the Red Sea all over again.

The Moses Bridge in The Netherlands is named after Moses himself and is supposed to feel like a structure from biblical times. Clever, seemingly invisible bridge parts make it appear as if the water has been parted all of its own accord just for you.

And the piece de resistance; The Golden Bridge in Vietnam.

Opened to the public last year, this awe-inspiring bridge is situated on the Ba Na Hill Mountain resort Da Nang and looks like it is being held up by two giant stone hands.

On a day like this it resembles a scene from The Lord Of the Rings.

We can just imagine Frodo and Sam having to cross this perilous bridge on the way to Mordor to destroy the One Ring. The mist makes it feel even more surreal.

There is even a simialar ancient-looking giant foot shown in the film.

Did the designers of the Golden Bridge use this fantasy trilogy as inspiration? Perhaps they did. Not that they would ever admit it.

It has of course become a huge tourist attraction.

Since the bridge opened to the public last June, it has become a huge hit with tourists who want to see the unique design and break-taking views of the landscape beneath. Interesting fact: The bridge sits a massive 3,280ft above sea level.

We wonder where the designers really got their inspiration from?

According to Vu Viet Anh, founder and principal designer at TA Landscape Architecture who created this masterpiece, this magnificent bridge was inspired by the world of the gods, giant and living things. Perhaps it was Atlas, the Greek God who had to hold up the heavens as a punishment from Zeus who influenced him.

If you take a closer look at the hands themselves...

The designer has used moss and made detailed cracks all over in order to make the stone appear older and give the impression of it being like ancient ruins. We'll bet you agree, it's defintely effective.

And they are actually covered them with steel meshes.

The designers created the skeleton of each giant hand first and then covered them with steel mesh. They were finished off fibre glass. Interesting fact: The construction of the bridge took over a year to finish.

But they are purely decorative.

The bridge, which is 150m long and 5m wide, is held up with simple steel and the hands are purely there for decoration. We would be slightly scared if they were structurally holding up the entire structure.

It has gold features as the name would suggest.

Although the deck is made of basic timber, the stainless steel handrails are luxuriously golden-coloured. According to the designer, 'The bridge was patterned as a precious gold bullion which was dragged out and being treasured by a giant pair of hands between heaven and earth.'

The client, Sun Group, were initially hesitant about the design of the bridge.

And it took months of persuasion for TA Landscape Architecture to get them to take a leap of faith. We bet now they are glad they did.

Now let's see what other people think of this brilliant bridge.

A very valid observation. The Golden Bridge definitely has a '70s music era vibe about it. We almost feel like putting on some flares and listening to some Pink Floyd.

And it definitely feels surreal.

We can just imagine staring out at the view from this conceptual bridge, musing over our dreams and exploring our inner psyche.

Apparently the geniuses behind this structure are already planning their next bridge in Vietnam.

Vu Viet Anh has revealed that his next bridge will be silver and made to look like a god's strand of hair. And it will connect to the Golden Bridge. Maybe this time his inspiration will come from Poseidon, God Of The Sea.

And this isn't the only unusual attraction in Vietnam.

Check out this Crazy House Hotel which is designed to look like how a treehouse would look if you were tripping. We are freaked out and we are stone cold sober.

If your answer is yes, then head to Lang Biang Mountain. Not only can you enjoy a good climb but you can see how the locals have painted the horses to look like zebras. Why? Apparently zebras are less threatening-looking than horses. Who knew?

And if heading to an abandoned water park sounds like your idea of fun, then Ho Thuy Tien should be top of your list.

Built in 2004 and later abandoned, this water park is a hidden secret for any danger-seeking tourists. There even used to be crocodiles at the bottom of the waterslides but thankfully they have gone now. Or have they?

Am Phu Cave will test your nerve and probably give you nightmares for weeks but if that's your bag, then head there for an up close and personal demon tour.

We don't really need to say anything else. #OnlyInVietnam

Well, it's definitely not for the fainthearted. They are known for eating snakes and serving their hearts (still beating!) in vodka shots. We'll stick to our Flaming Sambucas if that's ok.

Not in Vietnam, but another amazing architectural structure that is held up by a hand.

The Hollywood Hand House, which is located in Los Angeles, was created by architect Andreas Angelidakis and is supposed to represent a celebrity exposing themselves to the paparazzi. Deep. Real deep.