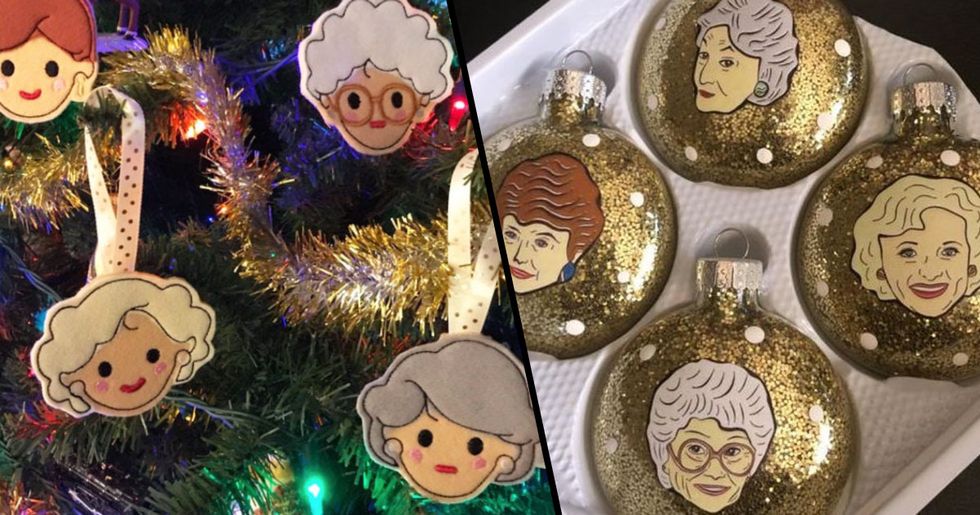 Let me remind you of the sheer brilliance that was, that is, NBC's The Golden Girls. The show holds a massive audience of loyal fans from its first airing in 1985, and people still remain dedicated to the show to this day.

But since it's no longer airing, it's all too easy to forget your favorite characters. Luckily, the internet has come up with a clever solution - Christmas decorations. Now you can give your home's festive decor a Golden twist. Here are some of the best options.

The Golden Girls graced our screens for 7 glorious years.

The sitcom first aired in 1985 and ran right up until 1992 when Bea Arthur (Dorothy) decided to call it a day. Nice one, Dorothy...

Those ladies sure had their work cut out delivering impressive one-hundred-and-seventy-seven episodes in total.

Creator, Susan Harris, wanted to make a comedy show about older women. This was pretty forward-thinking for eighties television. It's almost impossible to imagine how a show about 4 women (three widowed, one divorced,) living in a house together, was picked up by NBC.

The wit of these women quickly drew in audiences.

Audiences fell in love with Blanche's raging promiscuity, matched with Rose's comic innocence, and mother and daughter, Sophia and Dorothy's, endless sarcasm. The show was unapologetic, like nothing else we'd seen before, and was just so funny.

The guys at NBC knew they were onto a classic.

NBC executive, Warren Littlefield, recalled his reaction after reading that first Pilot episode. He said: "I was running all over the house grabbing anybody who would listen. I kept reading scenes to them and saying, God, this is brilliant [...] There's nothing trendy about this show. There are no tricks. It's a classic."

One of the reasons that The Golden Girls has stood the test of time was because its storylines were consistently on the right side of history. The ladies were tackling topics of same-sex marriage, coming out, homelessness, elder care, the HIV/Aids epidemic, and assisted suicide - and doing so in a non-preachy, sensitive, and accessible, way.

The show was a massive hit with LGBTQ+ audiences.

Even today, some twenty-seven years after the pilot aired, young members of the queer community are discovering the show and finding joy in its strong, open-minded, and witty ladies. There is something really powerful in making a TV show about an older generation of women, that is inclusive and welcoming of the queer community. Typically, old heterosexual women are presented in the media as being anti-LGBT. This negative portrayal has been damaging and shows like The Golden Girls were crucial in turning perceptions around.

The show taught us about friendship.

When the women all ended up living in Blanche's Miami home, we were given an insight into the joys of older women supporting, loving, and generally caring about each other in the name of friendship.

The show calmed our fears of growing older.

The Golden Girls didn't shy away from the trials of growing older, but they presented the triumphs, too. Anyone who worries about getting old and grey should certainly give the show a watch. Frankly, most audiences wished their lives were just like those of the 4 friends.

Since the show's end, it's been greatly missed.

But now, the internet has come up with an epic way to ensure you're never too far from all your old faves. That's right - Golden Girls themed Christmas decorations!

Let's start with these.

The intricate wooden carvings feature the girls themselves, plus some cute sayings. They're made of maple and cost $30 for the full set.

These glittery baubles take the Golden theme quite literally! Alongside the handpainted accents, these retail at $25 for the set.

This clear bauble featuring the whole gang is probably for you. The single bauble costs £6.49, or around $8.

Or something more subtle?

If you fancy paying homage to the girls without them taking over your whole tree, look no further. This oversized number costs around $17.

Or how about these cuties?

These hand-embroidered faces are hard not to love. They cost $8 each - or $30 for the full set.  Feeling excited for Christmas already? Netflix has your back with six brand new holiday movies for your enjoyment. Just keep scrolling to learn more!