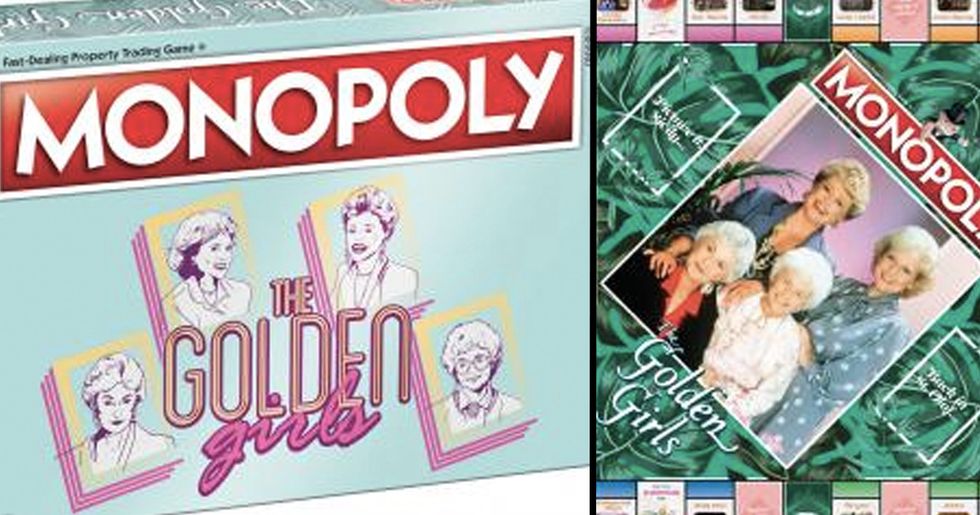 Golden Girls Monopoly Is The Perfect Gift For Your Best Friend

This year, don’t just tell your best friend you love them—show them with a really awesome gift. If the two of you are Golden Girls fans, then there’s no better gift than the Golden Girls edition of Monopoly.

That way, you and your BFF can hunker down with some cheesecake and spend the evening purchasing properties like Shady Pines and Blanche’s bedroom. Put the show on in the background (pro tip: it’s available for streaming on Hulu!), and round out the night by discussing which one of you is Dorothy and which one is Blanche. By the end of the night, your bestie will be singing “Thank You for Being a Friend.”

Read on to find out all the details about this ridiculously fun gift and discover some surprising facts about your favorite TV show.

Seriously, it’s the best gift ever.

Hop over to Amazon to grab a copy for your bestie. You can binge watch the show while you wait for it to arrive.
Buy Now

The Chance and Community Chest cards are Golden Girls-themed, and of course you can also land yourself in jail just like in classic Monopoly.

Even the pieces are iconic.

Get ready for hours of entertainment.

But watch out: you might have to contribute to the cheesecake fund, pay Blanche’s income taxes, or go on an impromptu shopping spree.

After you win the game...

Impress your friends with some of our favorite little-known Golden Girls facts. Read on to get the dirt!

The cast could have been completely different.

But she wasn’t cast because she ad-libbed a curse word during the audition.

Instead, Bea Arthur got the part of Dorothy.

She was reluctant to take the role at first, but Rue McClanahan (aka Blanche) convinced her she had to do it.

Rue McClanahan had an interesting clause in her contract.

It stipulated that she got to keep all of the clothes that she wore on the show.

Estelle Getty, who played Dorothy’s mother, was actually a year younger than her onscreen daughter.

It often took more than an hour to achieve this look.

The show was inspired by a real-life experience.

Brandon Tartikoff got the idea for the series while visiting his aunt, who would constantly bicker with her best friend.

Even though it was the ladies’ favorite late night snack, Bea Arthur didn’t even like cheesecake!

The show had some seriously high-profile fans.

Queen Elizabeth and the Queen Mother loved it so much that they requested a live show.

And it actually happened!

They did have to tone down some of their raunchier jokes, though.

The show had other royal fans, too.

Apparently Princess Diana liked to watch it with Freddie Mercury. Sometimes truth is stranger than fiction.

She was the only member of the cast who had never acted on TV before.

Getty would write her lines on props so she wouldn’t forget them.

Once, she even wrote them on a banana.

All four of the stars received Emmys for their performances.

It was one of the first shows to feature openly gay characters.

One of the girls’ friends was a lesbian, and Blanche’s brother was also openly gay.

Mario Lopez had a guest spot on the show.

Before he was on Saved by the Bell, he played Dorothy’s student whose family was threatened by deportation.

They got along as colleagues, but weren’t as close as their characters were. Rue McClanahan and Betty White did become good friends, though.

The show had a spinoff that lasted one season.

It was called The Golden Palace, and starred all the women except Bea Arthur.

And that wasn’t the only spinoff!

There was another called Empty Nest about the girls’ neighbors that ran for seven seasons.

Bea Arthur’s ears weren’t pierced, so she had to wear clip-on earrings.

She said her signature giant earrings would leave her ears numb by the end of the day.

At 96, Betty White is the last surviving Golden Girl.

The other three passed away within three years of each other.

Betty White and Rue McClanahan found a way to pass the time between takes.

They played alphabet games together when the cameras weren’t rolling.

The house shown in exterior shots is actually in Los Angeles.

via: The Golden Girls Wiki

Although the series took place in Miami, the house that was used for exterior shots was actually in LA.

The show introduced viewers to the concept of a lanai.

For viewers that weren’t from Florida, a lanai (aka a screened-in porch) may have been a new concept.

That’s a lot of people! For comparison, 26.5 million people watched the Oscars in 2018. Be sure to share this story with your Golden Girls-loving friends!