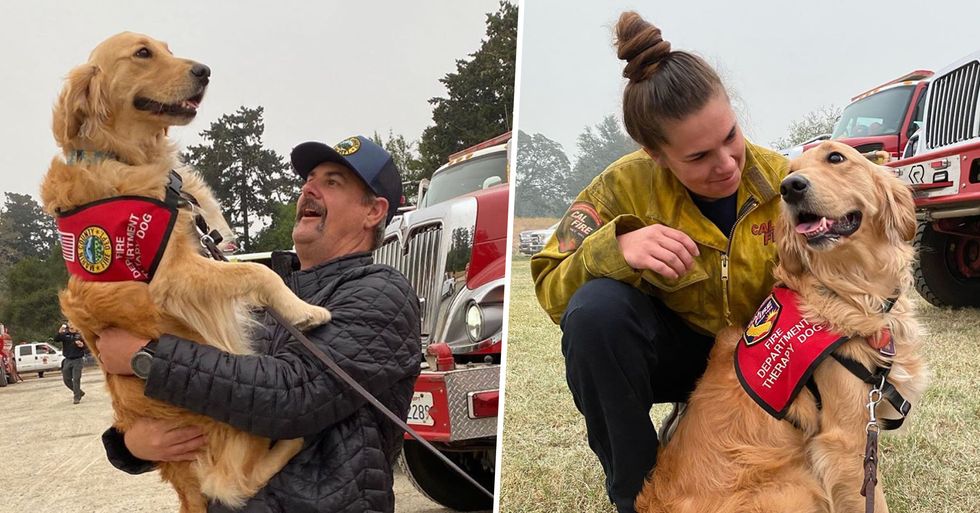 Amid the terrifying California wildfires, there's been a beacon of light in the form of a golden retriever named Kerith, who has made it her mission to break down the stigma of mental health issues in first responders.

The photos are utterly heart-melting...

The El Dorado Fire, which has grown to more than 10,000 acres, was ignited when a family used a “pyrotechnic device" for a flamboyant gender reveal.

Over six-hundred firefighters were called to tackle the blaze...

Which became so bad that it could even be seen from satellites in space.

California Governor, Gavin Newsom, was forced to declare a state of emergency in 5 counties.

It's a truly dire situation.

And, as the days roll by, more and more photos from the blazes have been emerging from panicked residents across the country.

The fires have engulfed California's skies into a murky orange hue...

But now, images have been surfacing from Oregon...

And they show a blood-red sky in the middle of the afternoon.

It doesn't even look real...

And many of these images were captured long before sunset, with the eerie skies visible in full daylight hours.

But, remarkably, the color isn't actually caused by the flames.

Instead, it’s the result of a phenomenon known as "Rayleigh scattering", which is caused by smoke particles from the wildfires, IFL Science reported.

Firefighters are working tirelessly to battle the flames...

As the fires rage on, there has been one beacon of light... in the form of a golden retriever.

2-year-old therapy dog, Kerith has been visiting firefighters across the state to provide some much needed emotional support.

Heidi, Kerith's owner, initially raised her to be a guide dog for the visually impaired, but her affectionate personality proved to be better suited to becoming a therapy dog instead.

"Kerith loves people more than other dogs or anything else."

"It was clear to me from an early age that she would be an excellent therapy dog because of her love and devotion to people," Heidi added.

After training through the Pet Partners organization and passing the evaluations...

This was where Kerith first formed a bond with firefighters.

And soon, she was paying regular visits to the stations. "It was love at first sight," Heidi said.

Amid the current wildfires tearing through California, Kerith knew the firefighters would need her more than ever.

At each, the pair arrive around 6 a.m. as the team is eating breakfast and preparing for their upcoming twenty-four-hour shifts.

Kerith walks up and down the rows of parked fire engines, greeting people along the way with comforting cuddles and a wagging tail. "Kerith matches people's energy," Heidi explained. "If a firefighter is super excited and lays on the ground so Kerith can roll around and play with them, then Kerith will be higher energy and silly with them. If a firefighter is calm, stressed, and withdrawn, Kerith will be calm as well. She'll sit closely to the individual, sometimes sit on their feet and lean into their body in a way that says, 'I am here for you as long as you need me.'"

Interacting with therapy dogs like Kerith is proven to provide both mental and physical benefits...

Now, Heidi and Kerith are on a mission to help change the stigma surrounding mental health for first responders.

If you'd like to do your bit to help with her and Kerith's efforts to enable them to afford traveling to the California fire base camps, you can donate to their GoFundMe page here.