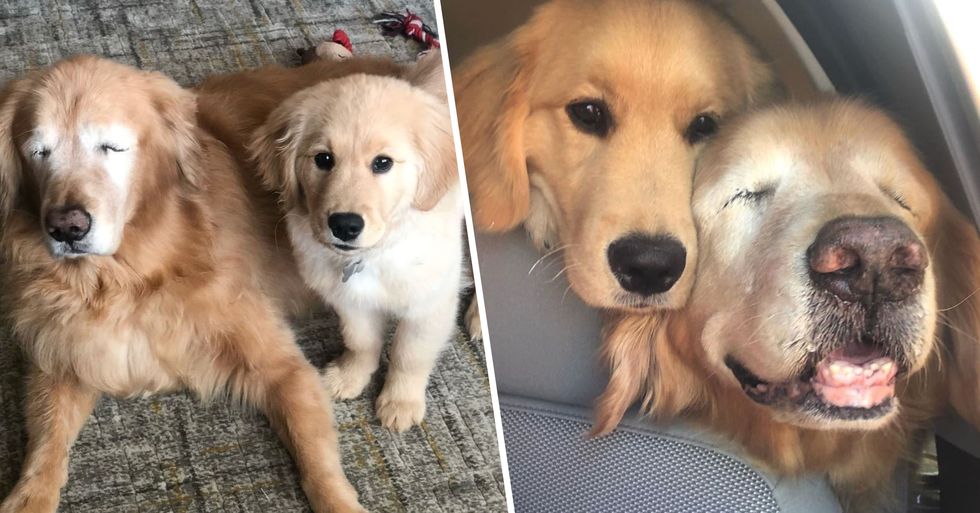 Golden Retriever Gets His Own Guide Dog After Losing Both Eyes

Many pooches work as faithful service dogs and they are now needed more than ever.

But have you ever seen a dog who relies on a guide dog?

Many service dogs are used for a little bit of therapy...

And they have proven to be calming for people who work in stressful situations.

But there's a pair of dogs that have really taken the internet by storm.

Because this is a guide dog who belongs to another dog. Truly, you couldn't make it up.

Charlie was 11 years old when he lost both his eyes to glaucoma.

And in order to help him get used to his new way of life, owners bought Charlie a puppy pal, Maverick.

"When they would play, Maverick would realize that Charlie would lose the toy sometimes."

"So Maverick would pick it up and put it back in front of him to re-engage playtime. They almost turn into little sled dogs where they’ll walk together," owner Chelsea told NBC Philadelphia.

"They’re both pretty crazy and special. They’re definitely our entertainment."

And the relationship is two-sided. "Maverick is here to help Charlie around and Charlie is trying to teach Maverick manners."

"For us, it was a no-brainer, empty our retirement plan to care for this dog because he makes us happy."

"Everything has just been so positive and loving and I’ve even had people reaching out about their dogs who had glaucoma."

"It was crazy, it was not what I was expecting."

Well, we can certainly see why the internet has gone wild for these pooches! Fancy more cute service dogs? Scroll on to learn about the Netflix documentary that'll warm your heart...