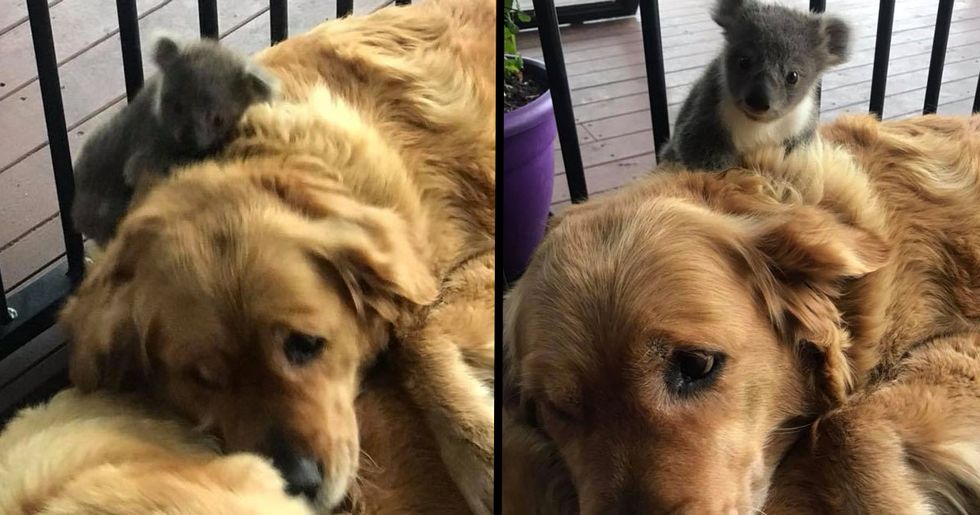 Here's a cute story to reduce your stress and make your day just that much better.

It's true that Australians deal with the craziest animals on a daily basis, from snakes inside their toilets to venomous spiders on their ceiling. But they also get to encounter the other end of the "crazy" spectrum. Koala bear families that live in the trees by their house.

Isn't Australia just the perfect country? Sure, you might wake up to a python next to you... But you're just as likely to wake up to a furry koala! I'd say it's a pretty good deal.

Or it might be your dog who wakes up with one of these on its back. Koalas, I mean.

One cold September night, this little one wandered into Kerry McKinnon and her husband Raymond's house and snuggled up with Asha. News Australia contacted Kerry to find out more about it.

Prepare for some cuteness overload.

That morning was an emotional roller-coaster.

Asha's owner Kerry McKinnon, 45, woke up to find her dog downstairs with a baby koala on her back.

It surely was a sight worth getting out of bed for.

"It was quite early in the morning, and my husband yelled out to me to come have a look at something," Kerry told News Australia.

The koala was so tiny and smiley.

"I didn’t know what he was talking about at first but then I saw this tiny koala snuggled on top of Asha."

It took Kerry a moment.

She was so surprised by the early-morning finding that it didn't even occur to her to take time and appreciate Asha's efforts.

This puzzled the dog too.

"I just burst out laughing. Poor Asha didn’t know what to think, she just kept looking at me with such a confused look."

Which made Kerry laugh even more.

"She looked a bit guilty when I came out to see what was going on. Her expression was hilarious."

Turns out, Asha became a hero that day.

When she met the baby koala, she didn't attack or otherwise scared it away. Instead she kept it warm in her furry embrace.

However, the real mystery of the story was how the little koala had ended up with Asha.

Kerry believed the little joey got accidentally separated from its mother during the night and lost her in the dark.

Then it wandered onto their back porch.

"I think the baby koala fell out of his mum’s pouch and didn’t know what to do," said Kerry.

That's where it found the dogs.

"He would have just wandered over to our back porch and seen the dogs in their beds, then decided to snuggle in Asha’s fur because it’s nice and warm."

They can drop to as low as 5°C. Kerry told News Australia that the baby koala "never would have made it through the night." If not for Asha's warm fur.

Kerry assured her friends that her dog was extremely gentle with the little one.

"She didn’t hurt the baby at all, but I do wonder how he came to be in that predicament in the first place!" she wrote on Facebook.

There was some true connection between the two.

"She kept looking back at the koala but she wasn’t trying to get him off her or anything. She was happy to let him snuggle into her," Kerry told News Australia.

But it's not all that surprising.

According to PetWave, Golden Retrievers are an intelligent and well-behaved breed that adores people, especially children.

These qualities are what saved the little koala.

"Asha definitely saved the koala’s life by keeping him warm. He would have died out there if left alone all night. The poor thing could have been taken by a fox or something too."

But neither of the two wanted to leave the other.

Kerry found it difficult to remove the baby koala from Asha's back as it made a "huge fuss" when she tried to do so.

But even its disapproval was adorable.

"When we took the koala off to wrap it in a blanket, it hissed at me and carried on."

Kerry believes it had something to do with Asha's canine instincts.

"I think dogs have that protective instinct. The koala didn’t want to leave Asha’s back."

The scene was incredible to witness.

"I think it would have been happy to have just slept there all day. It was really an amazing thing to see and so uniquely Australian."

They took the koala to a vet for a check-up which went really well.

Unfortunately, the couple had to give the joey over to a local expert carer. "Wish Asha could talk so we know how this came about! We didn’t want to keep him as I would feel so bad if he died. Lucky there is a koala person in Mt Gambier. She knows what to do and will keep us updated," she said on Facebook.

Kerry herself most likely didn't expect so much interest when she posted the photos. They weren't even meant for the public eye originally. People who wanted to share them with their friends abroad had to ask her to make the post available for public sharing.

Other Facebook users expressed their amazement with Asha's motherly behavior.

"I'm amazed the other dogs are so tolerant of this little impostor," said Trudy Hamilton-Irvine. "That is amazing. How funny is that. I bet you thought you were seeing things. Cute baby, life is never boring on the farm," said Kylie Tonissen.

Fiona Bray: "How cute! Lucky she was looking after her new baby and didn't try to hurt it. Poor little thing." Helen Callahan: "Animals are amazing. Actually prefer them over a lot of the human race."

Australian problems, am I right?

Lisa Fehrmann also shared her own experience with wild animals in the house. "We woke up one morning with our border collie with a baby possum on her back. She was so careful with it. We, too, passed it on to the native fauna rescue."

Then everyone tried to figure out what happened to the baby's mother.

Some interesting theories came up. Kerry said, "She [Asha] was barking last night near our woolshed where there are Koalas. I called her back before I went to bed, so not sure what went on after that! She wouldn’t hurt anyone, though."

Then Amanda Munn asked if the local koala carer would allow Kerry to "release it back out near the woolshed."

So that the baby would still be able to reunite with its mother. Kerry wasn't sure if that would be possible but promised to find out.

Others worried the mother may no longer be alive.

Mandy McIntyre suggested that a "fox may have attacked mamma bear." But Kerry wasn't so sure about that. "Hard to say, Mandy, no dead koala or anything, but Asha was barking at something last night!" She thought it was the mother she was barking at but couldn't understand "why she would ditch her baby."

Yet, others thought maybe Asha found the baby koala and brought it back with her.

Kym-Marie Berkin said, "Certainly be interesting to know how she acquired her new accessory! Does she wander very far from home, at all?" Kerry replied, "No, not at all. Her and her mum Ali used to, but they haven’t for months. We have koalas in the trees not far from the house."

Maybe Asha scared the mother away. By accident, of course.

Kym-Marie Berkin said, "Surely she wouldn't have stolen it, would she? Might have fallen from a tree. She might have been checking it out and it jumped on board. Very unusual for mum to not be around. Did Asha have any bites or scratches on her?" Kerry replied, "Raymond thinks the mum might have been heading across the paddock and Asha had barked at her and she either dropped or ditched her baby, and then he climbed aboard! She’s extremely gentle and wouldn’t hurt anyone, but she will bark at koalas, foxes etc! Nope, she had no marks at all!"

After all, such sightings of koalas aren't all that uncommon in the area.

Kerryn Jackson shared, "We were coming back from Andree and Adrians last Sunday morning and we had to stop and let a koala walk across the road. I have never seen a koala in Strathdownie." Kerry replied, "We have them in the gum trees around us. We hear them during breeding season!" So the appearance of the baby koala in Kerry's house remains an unsolvable mystery.