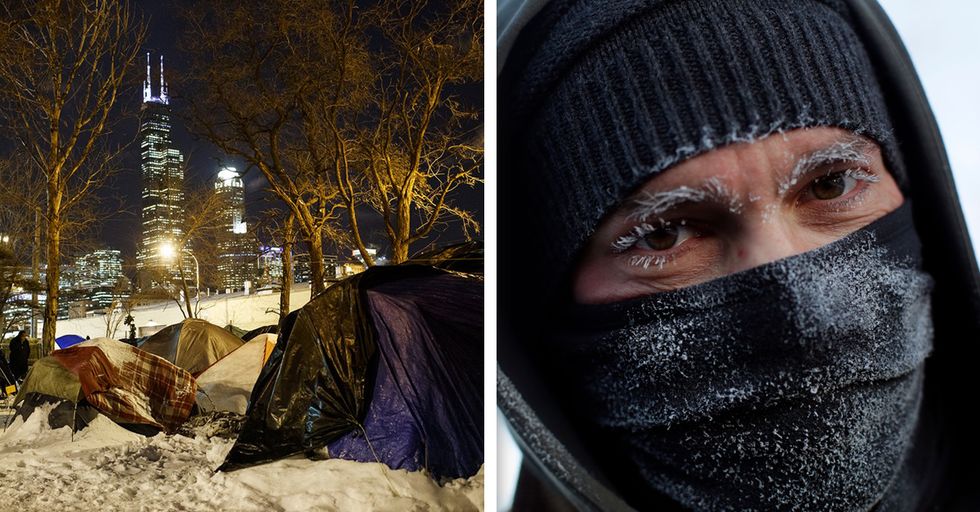 Last week, the Midwest was hit with one of its worst cold snaps in decades, with temperatures plunging to as low as -56 degrees Fahrenheit. In Chicago, the low on January 31 was -21 degrees, smashing the previous record for that day (-12 degrees in 1985).

A polar vortex is a large area of swirling cold air (aka a low-pressure area) that normally stays in polar regions. However, in the winter, the North Pole’s polar vortex expands and sends cold air south — which is how the Midwest was suddenly plunged into a few days of temperatures colder than even Siberia.

Many schools and offices across the region were closed due to the extreme weather, but some people were still forced to brave the cold. Chicago’s homeless population was heavily affected by the weather, and while warm shelter spaces popped up in different spots around the city, there were still people on the streets on those freezing nights.

One group of homeless people had set up a makeshift camp with tents and blankets.

There were about 12 tents set up near the Dan Ryan Expressway, a major highway in Chicago.

They were keeping warm with portable propane tanks.

At midday, one of the tanks exploded, and about 100 other tanks were confiscated by the emergency response crew, citing a safety risk.

The people at the camp were going to be moved to a Salvation Army warming center.

Soon after this plan was made, the city told the Salvation Army that an anonymous donor offered to put the camp’s 70 residents up in a hotel for the rest of the week.

Nearly all of the residents took up the Good Samaritan’s offer.

One man opted to go to the Salvation Army’s warming center instead.

This act of kindness was a bright spot in the midst of a difficult and dangerous situation.

Even a small act of kindness can save someone’s life.

The polar vortex caused a large number of injuries and even deaths.

According to the BBC News, at least 21 people died due to the extreme weather.

Patients were often homeless people or folks who had jobs that required them to be outside.

While cities set up warming shelters, not everyone was able to take shelter.

A 60-year-old woman was found dead in an abandoned house in Lorain, Ohio.

One man froze to death in his own neighborhood.

Officials said that the Michigan man was “inadequately dressed for the weather."

An 18-year-old college student passed away.

He was found unresponsive just a short walk from his dorm room; the windchill was -51 degrees at that point.

In Milwaukee, a man died in his garage.

A medical examiner reported that he had “apparently collapsed after shoveling snow."

Near Chicago, a man died after being hit by a snow plow.

The homeless population was especially vulnerable to the extreme weather.

In temperatures that low, frostbite can take effect in as few as five minutes.

“Five Chicago buses were scheduled to make their way around the city overnight into Wednesday, so that homeless peo… https://t.co/tt6CRTGxA2
— Joanne Kenen (@Joanne Kenen)1548820193.0

Many homeless people were able to find temporary shelter, whether with friends and family, at homeless shelters, or in the city’s warming centers.

But problems can arise even when the weather warms up.

As Douglas Schenkelberg, executive director of the Chicago Coalition for the Homeless, told The New York Times, once it warms up, “the scaled-up capacity will disappear, and you’ll see people back on the streets, and those people need housing. That sense of urgency completely disappears when the crisis goes away."

Though it’s a kind gesture, Twitter users also pointed out that a coat wouldn’t be nearly enough protection from the weather.

Crowdfunding campaigns were also started to help those in need.

Folks took to social media to share their experience of the polar vortex.

The ice actually creeped inside the house!

Apparently, this was after being outside for four minutes. Yikes.

Ever heard of the boiling water trick?

In case you ever wondered what it’s like in Antarctica.

Another reason not to venture outside.

Even the traffic lights were done with the weather.

Lovely to look at; not lovely to be out in.

Bet you never thought stuffed animals would be so useful.

And others got creative in the cold.

Making the most of a freezing situation.

For people who had to go to work, Chicago trains kept running.

Crew members lit kerosene fires on the tracks to keep them from contracting.

Others braved even more treacherous commutes.

We really, really hope his commute was a short one.

Even bubbles were freezing.

Our inner science nerds are freaking out right now.

They might as well have been the same place.

Not too shabby for a pair of sweatpants. Be sure to share this article with all your friends who survived the polar vortex!
20%