Celebrities Who Also Happen to Be Good, Wholesome People | 22 Words 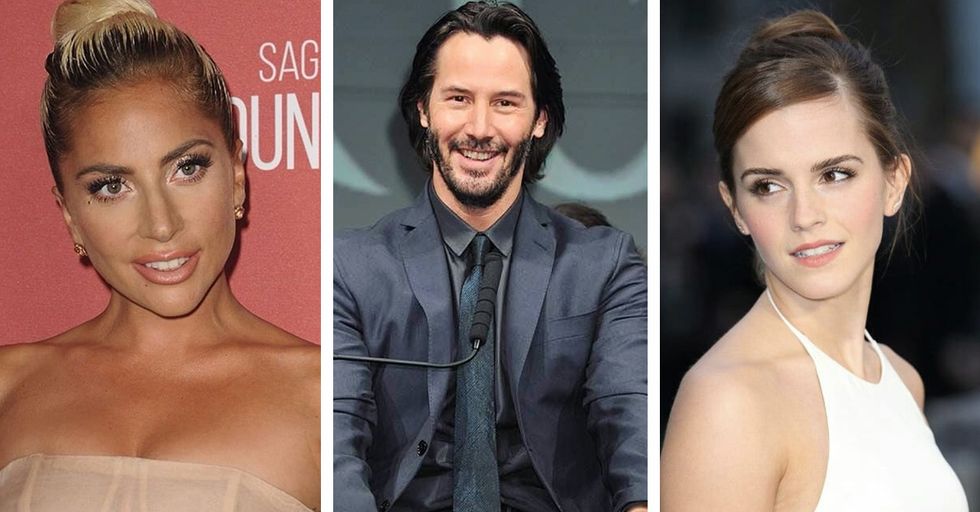 Celebrities Who Also Happen to Be Good, Wholesome People

They say you should never meet your heroes, and in most cases, they're right. That's because, when you see someone on TV or hear them on the radio, we put them in rarified air — make them more than just a person. They become a Capital-C Celebrity. And no one can live up to that lofty title.

Except for these folks.

That's right, some celebrities are honest-to-god good people. Here, we've collected the best of the best, the celebrities who are using their fame not to buy fancy mansions and cars, or to produce over-priced sneakers, or to but to help out their fellow man, or to make life easier for the people they come across, or who are just overall good people. These celebrities are, in fact, the most wholesome of celebrities. We can all only aspire to be as good and talented as these stars.

As an actor, Leonardo DiCaprio is iconic.

Starring in movies as noteworthy as Titanic, The Departed, and most recently Once Upon a Time in Hollywood, Leonardo DiCaprio's been out-acting his peers for decades.

And he's also working to save the rain forest.

But even more noteworthy than the characters he's played are the rain forests he's trying to save. DiCaprio just pledged five million dollars towards saving the Amazon rain forest. And while I'm no rain forest-ologist, I'd say the Amazon is pretty important to those of us who like to breathe.

Keanu Reeves is maybe our most beloved actor.

Plenty of celebrities become memes, but how many become memes because everyone loves them so much? Keanu Reeves, star of The Matrix and the upcoming video game Cyberpunk 2077, has somehow turned good vibes into a brand.

Maybe because he's such a sweet guy.

From making sure some of his salary from the Matrix sequels went to the films' special effects and costume teams, to shouting "you're breathtaking" at a fan during the Cyberpunk reveal, we constantly hear stories about Keanu just helpin' folks out.

Playing the hyper-intelligent witch Hermione Granger in all eight Harry Potter movies, Emma Watson made being a nerd cool. (I am still mad she wasn't in Ravenclaw.)

And in real life, she's a great person.

Steve Buscemi always seems to be in movies about organized crime.

From Reservoir Dogs to Fargo to a brief stint in season five of The Sopranos, Steve Buscemi's presence usually indicates you're watching a movie where someone's gonna get whacked.

But he used to be a firefighter.

But before he was acting as a criminal, Steve Buscemi was out being a hero, working for New York's Engine Co. 55 as a firefighter. He even suited up again to help during 9/11, despite having become a successful actor.

Denzel Washington is maybe as good as it gets, both acting-wise...

Denzel's been so great for so long that we can just causally mention "Denzel" and you'll know who we're talking about. Still, no performance in the last 20 years has been as simultaneously fun and shocking as Denzel's performance as Alonzo in Training Day.

But Denzel is responsible for another incredible actor making his way into our lives, at least in part. Having paid for him to attend a prestigious theater program at Oxford, Black Panther star Chadwick Boseman credits Denzel for getting him to where he is today.

The WWE's John Cena is a 16-time WWE Champion.

Having wrestled — and beaten — the likes of The Rock and Triple H in the Main Event of WrestleMania, John Cena is one of the most decorated WWE Superstars in the history of professional wrestling.

And he's granted more Make-A-Wishes than any other celebrity.

And every kid wants to meet him, including a ton of sick kids who are granted a Make-A-Wish. John Cena's met with over 500 kids through the program, and his message of never giving up certainly seems to resonate.

At the start of the show, Sophie Turner's character Sansa Stark was an innocent little bird, but by the end? She was one of the biggest power players in Westeros.

And in real life, she adopted her direwolf.

On the show, all the Stark kids had direwolves, played by large dogs. Sansa's direwolf was the first to be killed off, but Sophie Turner, bless her heart, adopted the dog and kept her as her own.

Lady Gaga's been dominating the charts for years.

Even after all these years, Lady Gaga songs like "Paparazzi" and "Alejandro" and "Born This Way" still slap, my man. She is, without a doubt, one of pop's great talents.

But she also runs a non-profit for community development.

But she's also one of pop's great fighters for positive change. The Born This Way Foundation, founded back in 2011, works to promote "the mental and emotional wellness of young people by putting their needs, ideas, and voices first," according to its website.

Look, I know Walter White had his reasons for cooking meth and murdering allllllll those people, but the dude was rotten to the core.

But that's not the case in real life.

The actor who played Walter White, Bryan Cranston, earlier starred on the sitcom Malcolm in the Middle. His character, Hal, would often whistle and hum, and Cranston ended up getting checks from production to use his original music. And what did Cranston do with those checks? He threw parties for the cast. (No word if there was any meth at the parties. But probably not.)

Chance the Rapper is incredible.

If you can listen to "Hot Shower" off Chance's new record The Big Day or "No Problem" off Coloring Book and not nod and/or sing along, then man, I don't know what's ever gonna make you move.

LeBron James is incredible on the court.

There's been a debate raging over whether LeBron James or Michael Jordan is the best basketball player of all time. (Which, like, come on. It's LeBron. Let's see Michael pull those Cavs to three straight wins over the Warriors.)

And LeBron's also incredible in the real world.

But when you take into account LeBron's work with the LeBron James Foundation, which has paid for thousands of kids' educations, there's no question whether he or Michael Jordan, a notoriously bad tipper, is the better person.

Name one person who doesn't put Tom Hanks in their list of top 10 all-time actors. See, you can't, because no one would do that. Tom Hanks is love and happiness embodied, and that's facts.

But we don't just love him for his movie roles.

In addition to the countless stories about Tom Hanks inviting fans to see his shows (and even giving a random couple at a gas station their money back after they told him they hated his most recent movie), Tom Hanks also documents all the lost gloves he finds on the streets of New York, which is is very cute.

Sandra Bullock is still the top rom-com lead in my heart.

Listen, While You Were Sleeping is a rom-com all-timer (even if it is a little bit bananas), and Sandra Bullock's effortless charisma is a huge reason why.

But she's also wormed her way into a lot of people's hearts.

It's the random acts of kindness that make Sandra Bullock such a wholesome celebrity. She donated 5000 dollars to a GoFundMe to get an older homeless man a place to live, and donating her time and money during Hurricane Katrina.

Trick question, because there is no one better looking than Ryan Gosling. The Notebook star is just the platonic ideal of an attractive man.

So how dare someone who looks like him also be a good, upstanding man?

Check out Ryan Gosling stepping in to break up a fight, and using his beautiful man eyes to calm everyone down. And it really just isn't fair. How come Ryan Gosling gets to be both attractive and nice when my therapist constantly tells me I'm neither?

Ken Jeong has always been funny.

Most people discovered Ken Jeong in The Hangover movies, but his turn on Community as Ben Chang, a Spanish teacher who did not know Spanish, was out of this world.

But he used to practice medicine.

That's right, this comedian used to be a doctor, and all doctors are good people. They save lives. In fact, Dr. Ken even saved a woman's life during one of his stand-up shows.