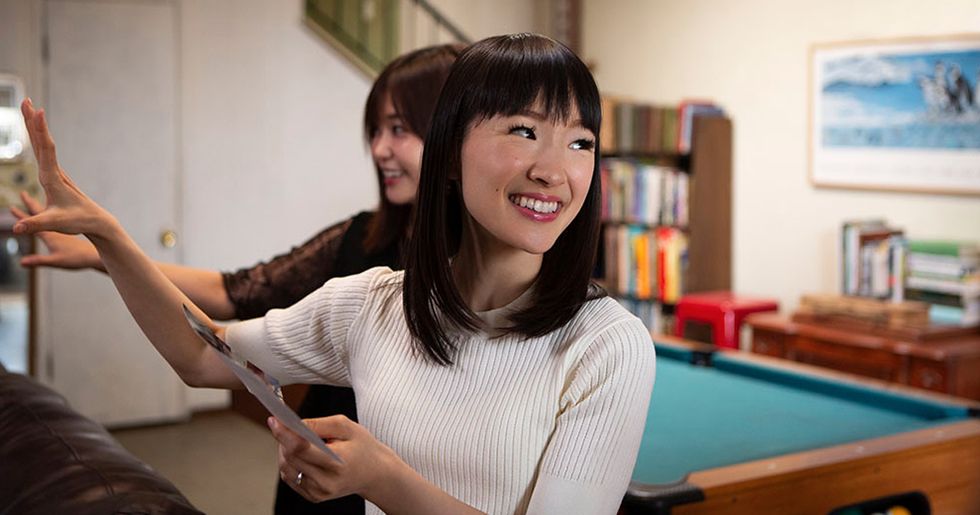 Netflix’s hit show Tidying Up with Marie Kondo has sparked an influx of donations for thrift stores across the country. Everyone has been bitten by the KonMarie method bug, myself included, and is feeling the amazing effects of decluttering. Since her show debuted earlier this month, donations have increased for January which is typically a slow month and many are thanking Marie Kondo.

The show picks up where her New York Times bestselling book left off, The Life-Changing Magic of Tidying Up. And how does her now-famous method work? It's very simple, you should love every item you own, and if it doesn’t “spark joy” it should be thanked, folded, and donated. Marie Kondo has lit so much motivation for people to declutter that living a minimalistic lifestyle is the trend.

She’s here to stay, tucked neatly in the back of my mind, and I’m guessing for others as well, making sure I keep things tidy,  and not spend money on things that don't spark joy. Thank you, Marie. My bank account is especially grateful.

While the world is organizing their homes, thrift stores are taking on all of the donations they’ve received and hope that their new items can spark joy for someone else.

Kondo's approach to decluttering has gone viral since the show started airing on Jan. 1st

It's such a simple approach that literally everyone is doing it!

If you're not yet familiar with her method of tidying, it's very simple.

Hold each item in your hands. If it “sparks joy," keep it. If not, thank it and then donate it.  Easy peasy. It seems to me that Netflix probably figured it's a good start to the new year. A clean slate to try to get your goals accomplished sounds good to me.

It's probably no surprise that Marie Kondo has inspired people to downsize their clutter and donate their unloved belongings.

According to TODAY.com, some second-hand stores have noticed increases in donations for January, even beyond the spike that often comes after the holidays when people are clearing out their homes.

Goodwill stores in Maryland and in some parts of Washington D.C. are reporting noticeably high numbers of donations.

Brendan Hurley, a spokesperson for Goodwill of Greater Washington, told TODAY that their donations were up 66 percent in the first week of January. One donation center saw a 367% increase in comparison to the same week last year.

Goodwill of Greater Washington wants to keep the spark joy alive and is encouraging people to keep donating by posting a "Tidying Up" photo on their Instagram page.

Goodwill of Greater Washington is definitely keeping up with the tidying trend. Based on what I've seen so far on social media, seems like large piles of stuff is being donated.

Small chain thrift stores are also seeing a large number of donations coming in with people mentioning Marie Kondo or "the Netflix show made me do it."

Anything that inspires people to give is a good thing. I've known about the KonMari Method since her book came out a few years ago so I'm familiar with decluttering and donating. Now, I just need to get my husband and kids on board with it.

Kondo herself has expressed that she is excited by all of the excitement behind her show and how it's inspired people to tidy up.

She said in a statement to TODAY, “I’ve learned through my decade of experience tidying that it is universal, so I had an idea that the show would impact people — but to this level is extraordinary. My goal in creating the show was for as many people as possible to be introduced to and try the KonMari Method — and it makes me so happy to see that’s exactly what’s happening. I’m filled with gratitude!"

While many are inspired to downsize, there is a whole other group that is excited to shop all of the new thrift shop finds.

Exactly this came to mind when I started reading about the show going viral. As long as shoppers are being mindful of what they're buying and making sure it sparks joy, this can actually be quite fun too.

The thrifting finds are tempting but based on the positive effect Kondo has had on people, the desire to live a minimalistic lifestyle is trending.

As I type this my 5-year-old daughter is singing "Let it Go" and it seems very fitting.

Besides Goodwill, Vietnam Veterans of America is also a fantastic organization to make donations to. My favorite part is that they will pick up what you're donating from your front door.

I highly recommend that you research whether Vietnam Veterans of America picks up donations in your neighborhood.

The Salvation Army is also a great option.

If Kondo's Netflix show isn't inspiring enough, let's check out the posts people on social media have shared about their decluttering journey.

This is the type of stuff that makes me want to grab large garbage bags and just start dumping stuff in it. It's therapeutic.

Now I understand why my laundry pile is so large, we just have too many clothes. It's not that I haven't folded and put them away because I'm avoiding them. Right?

This isn't 7 bags of garbage from a party, this is all clothes going to donation.

A lot of us don't truly realize how having a lot of stuff can become overwhelming. It's a lot to manage. If you're not using it, or like in my case I've donated things that I even forgot I had, just donate.

Once you've determined which articles of clothing are sparking joy and you want to keep, Kondo's method recommends folding the clothes into small rectangular pieces.

It's more work but it has a genius purpose.

Basically, by folding clothes properly into squares or rectangles, you can maximize the amount you can store. Anything that can be stood on edge should be stored upright in a drawer.

Not only is the KonMari method amazing for organizing, but the folding technique is incredible for saving space. I just gave my messy drawers the side eye because I have to fold everything in there.

The garage is clutter town and this person is tackling that mess on the weekend.

Honestly, my entire garage is not sparking joy so I need to see garage decluttering inspiration. Or can I just replace mine with a brand new and organized one?

As a parent, I am here for all of the inspiration needed for decluttering kids' toys.

I can go all "KonMarie" on my kid's toys any day of the week.

Just remember that toys can go to donation too!

I try to pack everything neatly in a box so the next child can enjoy them like mine did.

It's a great idea to get the kids involved too.

Early learning of keeping things tidy and donating their things that don't spark joy sounds like great life lessons to me. Every parent should be on board with this.

"Does it bring me joy?" is a question we're all going to start asking ourselves.

If it doesn't, move on. It's a simple way to declutter.

An area that also needs attention and is often overlooked is the refrigerator.

I just did this too and it reminded me that I really should stop buying produce if we're not going to eat them in time.

The posts that really spark joy for me are the before and after.

There is something so satisfying about seeing the result of hard work decluttering and organizing.

Yes, I want all of my Crocs to be organized and displayed as if they are in a high-end fashion boutique.

I love when the results of organizing makes things so much easier to find.

It's also easier to see and determine if something isn't sparking joy and can go to donation.

I can just smell the satisfaction of organizing that happened in this room and it's incredibly satisfying.

Marie Kondo may love a mess, but I sure do love an organized and tidy space.

This can't go to donation but it can certainly spark joy for your mental health.

Decluttering your social media friends list is good for you too.

I feel this so deep in my soul it hurts. This looks very similar to my email icons.

If there's a way that I can just remove the counter from my email icon, that would spark joy.

If Marie Kondo's philosophy on tidying isn't the best thing to happen to thousands of people in desperate need of decluttering, I don't know what is.

Not only is this a fantastic way to clear your mind and keep yourself organized, but it's keeping donation centers across the country busy and full, and we all know that it can help someone in need. Now that feeling definitely sparks joy.

Tidying, organizing, and donating are the things to do now. Just don't go too hard on the KonMari method.

If being an extreme minimalist sparks joy for you, go for it. Just let me know what you've donated that I may want to buy.