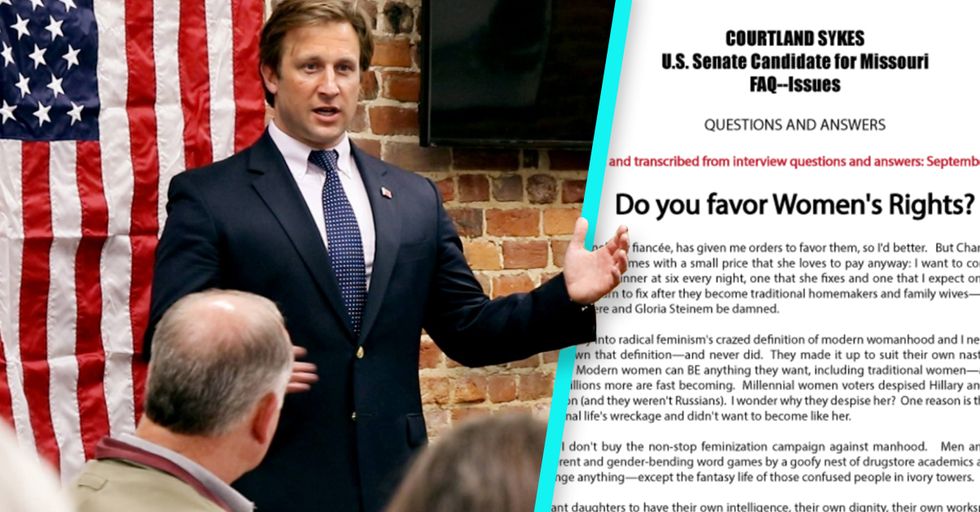 GOP Candidate Goes on an Unhinged Rant Against Women, Calling Them ‘Manophobic She-Devils’

I just want to remind you that we are living in 2018. Women don't exist to bend to the whims of the men in their lives.

Apparently, however, GOP Senate candidate Courtland Sykes (yes, that's his name, and no, he's not a villain from a '90s teen karate movie), hasn't gotten that memo.

Earlier this week, Sykes unleashed a written rant on Facebook explaining how he feels about "Women's Rights." In it, he basically expresses that he doesn't believe they (women) should have them (rights). That fact that this isn't fake is truly appalling. Not surprising, but definitely beyond the pale.

Courtland Sykes is a Republican candidate for the U.S. Senate from Missouri.

This poor man's Patrick Bateman (from American Psycho) describes himself as a "constitutional conservative" — he'll be going up against Democratic Senator Claire McCaskill in the November election.

On Tuesday, Sykes addressed some questions he'd been getting about whether he supports "women's rights."

Apparently, this is quite a hot-button issue for him. Yes, the issue of whether or not women, 50 percent of the population, should have fundamental rights.

He released a written summary of his feeling about his position, and it is truly a sight to behold:

We have to break this down because there are some real gems in each paragraph. And by gems I mean jaw-droppingly backward turns of phrase that belong in the Museum of Male Tears, whose collection I hope to curate someday.

First, Sykes exclaims that he wants "to come home to a home cooked dinner at six every night, one that [his fiancée Chanel] fixes and one that I expect one day to have daughters learn to fix after they become traditional homemakers and family wives."

I want to start a GoFundMe to adopt Sykes' eventual daughters from him as soon as they can pick up a spatula. Who's with me? We're not even close to done yet.

Sykes then explains that he doesn't "buy into feminism's crazed definition of modern womanhood." He doesn't explain what that definition is, but he does say that we women "made it up to suit their own nasty, snake-filled heads."

Awesome. So so awesome. Maybe my noggin is too full of snakes to understand this, but Sykes seems to think that modern feminism doesn't accept women who want to want to live more "traditional" lives (his words). Of course, that's just not true. If you thought that Sykes stopped at claiming women's heads are full of reptiles, well, you'd be dead wrong...

Sykes moves on to attack gender non-conforming folks ("gender-bending word games by a goofy nest of drugstore academics aren't going to change anything").

Then, he goes on to say that he hopes his daughters don't "grow up into career obsessed banshees who forego home life and children and the happiness of a family to become nail-biting manophobic hell-bent feminist she devils who shriek from the tops of a thousand tall buildings." First of all, his inconsistent hyphen usage is heinous.

This isn't a joke. This isn't an Onion article or a caricature portrait of a Republican candidate for the U.S. government in 2018. Courtland Sykes is real. This is the position on "women's rights" he typed up and sent out into the world because he thinks it will get him elected to the Senate. Let's make sure that doesn't happen.

Sykes is the kind of guy who thinks that all feminists are man-hating witches, and while he's wrong, he is pushing good feminists closer and closer to that position every time he opens his mouth. Ironic, isn't it?

The real problem with Sykes' rant, of course, is that it's so verbose that it many women were worried that it his most egregious phrases wouldn't fit neatly on a t-shirt.

These days, it's become sort of a habit of cheeky feminists to co-opt awful phrases from disgusting men and reclaim them as statements of strength and resilience. We all have "Nasty Woman" and a "Nevertheless, she persisted" merch in every corner of our closets, and we broadcast those messages loud and proud.

But we should never doubt the power of a woman to accomplish the impossible:

It might not be super catchy, but it is fierce and flirty and fun! You can buy them here and help Claire McCaskill sent this backward clown of a man back under the rock he emerged from. In all seriousness, Courtland Sykes and others like him are nasty relics of an old, outdated, and never-accurate argument about what feminism means. Sykes warps the definition of feminism to sell himself and other men as victims and justify the systematic oppression of all women. Most of all, I'd just like to say that a man named Courtland Sykes should not inform your view on anything, whether it's women's rights or above-ground pools. Courtland, we are hell-bent feminist she-devils, and we will never stop shrieking from the tops of tall buildings so long as men like you are around.