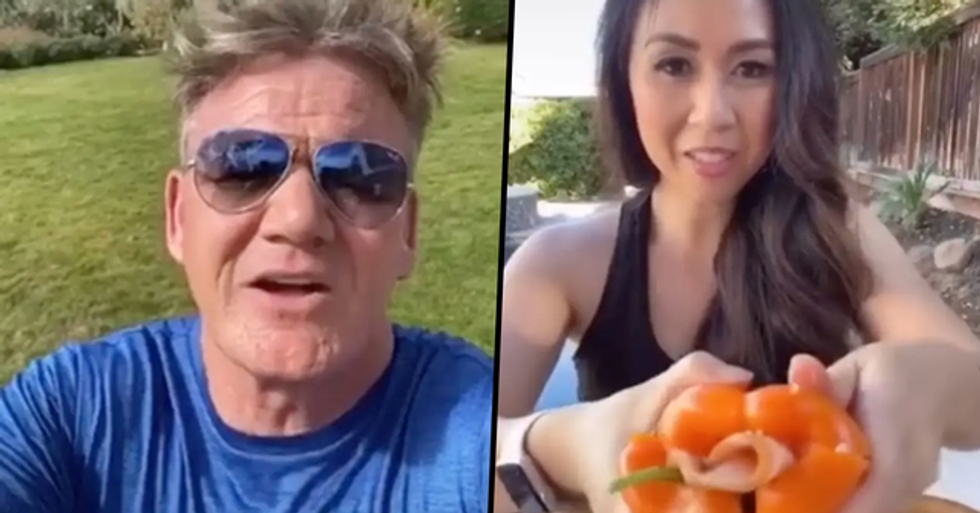 Yet another amateur cook has come under the intense fire of Gordon Ramsay this week after she showcased her "healthy" alternative to bread when making a sandwich...

Nobody wants to mess with Gordon Ramsay.

Gordon Ramsay, the king of angry cheffing, has become well-loved - if not a little feared - for his short temper and no-nonsense cooking style.

Gordon possesses a sheer talent in the kitchen.

But the majority of his fame comes from his hugely successful TV shows.

One of his most popular shows is Kitchen Nightmares, a show wherein Gordon helps restaurant owners to revamp their crumbling kitchens and transform them into the best places to eat in America. But of course, Kitchen Nightmares never falls short in its bad language and temper tantrums. Let's not even get started on Hell's Kitchen...

When it comes to making good quality food...

Gordon isn't afraid to put people well and truly in their place.

Budding chefs already know not to get in Gordon's way.

Well, most of them do, anyway.

Because recently, budding chefs on TikTok have been sending their own culinary videos to the chef for him to review.

Now, Gordon is no stranger when it comes to rating other people's dishes.

For years now, people have been sending the chef photos of their meals on Twitter, just for him to mercilessly roast.

As expected, Gordon never holds back...

And his scathing, unfiltered responses have proven to be sheer comedy gold.

So, when he started doing video reviews on TikTok...

People were very excited, if not a little nervous, to see what he had to say on people's homemade culinary inventions.

And, let's just say, his reviews have not disappointed.

For example, here he is grimacing at someone's strange chocolate, Nutella, and Ben & Jerry's sandwich... Or, as he called it, "a heart attack sandwich, one bite and you're gone."

And here he is, watching on in horror, as an enthusiastic chef attempts to turn "cheap steak" into "wagyu."

But his latest video is perhaps the best yet...

Because he went on to rebirth one of his most iconic insults... The idiot sandwich.

Popular food blogger, My Nguyen, or Idiot Sandwich, in Gordon's eyes, is the latest chef to get caught in his firing line...

And it's all thanks to her monstrous bell pepper sandwich.

Yep, this woman wanted to show off to Mr. Ramsay that bell peppers make for great bread substitutes...

And, as expected, he wasn't impressed.

As she enthusiastically adds cream cheese, spinach, and turkey, Gordon watches on in dismay...

Saying: "Is that a bell pepper? No. Cream cheese? Really? No. Come on!"

And, even when she squirts a healthy dollop of mustard onto her creation...

Gordon remains disgusted, noting: "That is not a sandwich. No, that is not a low-carb sandwich. Young lady, that there is an idiot sandwich, right there!"

Well, she seems to thoroughly enjoy her low-carb snack...

And takes a hearty bite out of it, which makes Gordon groan loudly.

You can watch the full review here.

But, despite being labeled an "idiot sandwich", the healthy, and imaginative chef is actually very excited by Gordon's video.

Nguyen says that she cried with laughter at his commentary.

Speaking to Insider, she said: "As funny as it sounds, it was quite an honor to be roasted by Gordon Ramsay."

And it turns out that her idiot sandwich is now more popular than ever!

"The now famous #idiotsandwich is a typical snack that I have during the day," she said. "What's ironic now is that the sandwich is trending on TikTok and people are eating it and tagging me in their videos." I don't know about you, but I won't be feasting upon an idiot sandwich anytime soon. For more Gordon Ramsay savagery, keep scrolling to see the time the tables were turned upon him...