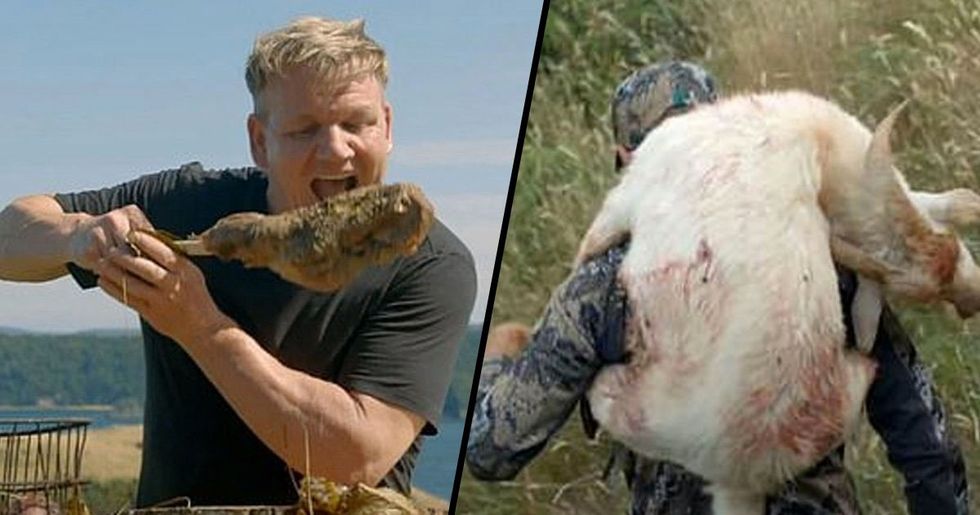 Gordon Ramsay is better known for his foul mouth as opposed to his actual job of being a TV chef. The brutal Brit is never too far from the headlines because of his unapologetic ways of dealing with people.

I say "unapologetic", when what I really mean is that he's a bit of a d**k to people, who don't deserve it most of the time.

And this incident is no different. Recently, he's been absolutely blasted for his "cruel stunt" on his new TV show. Some people think it's funny, but others have taken offense to his way of experiencing local delicacies. Is this meant to be a middle finger to the vegans or are they just taking it a little close to heart? Have a look and see what you think!

Gordon Ramsey is known for his "interesting" way of dealing with people...

Sometimes it's funny, sometimes it's too hard to watch. Keep scrolling to see some of his most savage insults ever!

To me and you, a doughnut is a sweet-treat used to satisfy an unhealthy craving, but to Ramsay, it can be used to describe someone who only has a limited number of brain cells.

My feelings are a little hurt right now.

I really wouldn't want Ramsay to be judging anything I've cooked...

To be honest, this one is one of his tamer ones...

It seems as if Ramsey has a habit of comparing people's food to sh*t.

Can donkeys even cook? That's the real question.

I'd rather be a doughnut than something like this...

Here's a piece of advice that no one should ever follow.

And obviously, we had to end it with a good ol' classic.

I don't know about you, but I'm feeling a little attacked after all that.

But there's no one feeling more victimized than these people...

And people aren't too happy with what it has to offer.

The show follows Ramsay as he travels around the world, trying native cuisines.

He goes to remote locations where he takes his love of "eating animals" to a whole new level.

It's not exactly a secret that the TV chef isn't a fan of the "vegan" lifestyle...

On multiple occasions, he has insulted the way of living. He has even gone as far as mocking PETA (People for the Ethical Treatment of Animals), a global charity that aims to prevent cruelty to animals by saying he's a fan of his own PETA: "People Eating Tasty Animals." Yikes.

Obviously, for some, this sparked an immense backlash.

But Ramsay isn't done just yet. On his new show, he can be seen chomping away on dead animals, including goats and guinea pigs. A food source for some, a problem for others.

In a recent episode, this happened!

Ramsay headed to New Zealand’s South Island to try out some traditional Maori delicacies. During the adventure, he goes up into the hills, where he shoots a goat and carries it down to cook. Keep scrolling to see the video - unless you're vegan, then I would advise you don't.

He marinated the goat meat for over six hours...

And roasted it in a dugout pit in the ground for two and a half hours. He then served it paired with potatoes and a berry chutney to a bunch of hungry diners who seemed to love the invention.

However, some viewers weren't too pleased...

This Twitter user called this the "worst show." But the argument remains the same. This is the way meat is produced and if Ramsay isn't doing it, someone else is. Meat sources provide nutrients for the body even though some people actually argue that they don't.

Have a look at just how much backlash Ramsay received for pulling such a stunt!

Maybe next time, don't look happy while you're pulling the trigger. That part is a little disturbing. If you fancy seeing Gordan Ramsay roast more people, keep scrolling...