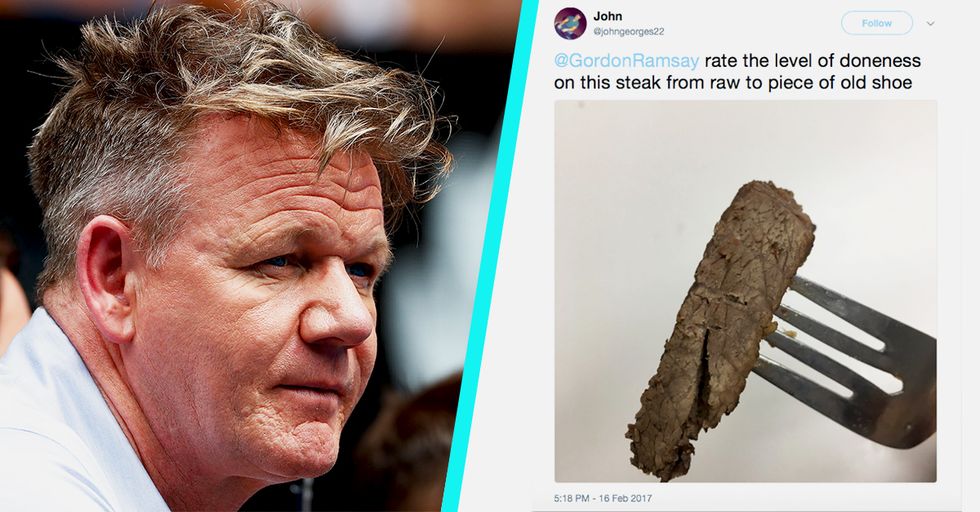 Ah, Gordon Ramsey. The irascible British celebrity chef is the proud owner of 16 Michelin stars, one Order of the British Empire (the highest honor a British citizen can receive) and of course, a very, very sharp tongue.

Ramsey has reduced grown men to blubbering babies, made former military personnel flee in a cascade of tears and now, he's been sharpening his claws on the would-be chefs of Twitter.

Boy, are they loving it.

One Twitter user thought he was fancy. He decided store-brought burgers weren't good enough for him. He would make them homemade, and add *gasp* mounds of beef.
Was Gordon Ramsey having it? Definitely not, because, as every chef knows, we don't disgrace our burgers with too much beef, and we certainly don't risk our arteries either.

This would-be chef undoubtedly thought she was doing a good job. She even got out the nice tray and everything.
Ramsey, of course, was not impressed. In fact, he was pretty sure this part-time chef was more like a full-time pothead.

One user didn't actually cook the abomination she served up for Ramsey's approval. Instead, she bought it from a local fair.
Ramsey, understandably, was not impressed. He thought it looked like a certain something. By something, we mean dogsh*t.

There are two things sacrosanct in the fast food world – hot dogs and fries. Why, in the name of all tarnation, would anyone mess with either?
Ramsey's reply was short and precisely encapsulated everything we felt. Also, now that we're looking at it, we're not sure those hot dogs are even cooked. Or that those fries are actually made of sweet potatoes...

This Brit went to France. This Brit ordered stereotypically American food in France. Did Ramsey appreciate her efforts?
Nope. In fact, he had a one word reply for her. "Merde." Guess what that means in English.

Here we have a very excellently-prepared chicken fajita. No lie, it's wrapped properly, got all the sides... it looks pretty decent.
Ramsey, of course, did not appreciate this novice chef's efforts at presentation. In fact, he called it "Chicken faj shit as !" Rude.

This steak looks... overdone. This steak looks like it lived, died, then lived and died again.
Ramsey gave it the exact response it called for, although, we have to say that Gandhi is spelled wrong. The again, Gordon Ramsey is a chef – not a writer.

We have to give it to this user's brother – he certainly went above and beyond on the presentation of this Halloween treat. But did Ramsey appreciate the effort that went into this?
Of course he didn't. In fact, as per his words, he'd been ignoring it for an entire year.

You ever see a recipe online and you think you can make something amazing, but all you end up with is tripe? That's obviously what happened with this user.
You'd think Gordon Ramsey, as the original creator of this recipe, would have words of encouragement, right? Wrong! This is Gordon Ramsey we're talking about!

This user thought they had it down pat. They thought that their creation looked delicious – nay – divine. Did Gordon Ramsey think so?
Of course not! In fact, his reply is a warning for all of us, where he's concerned. "Improve by staying outta the kitchen..... " Indeed.