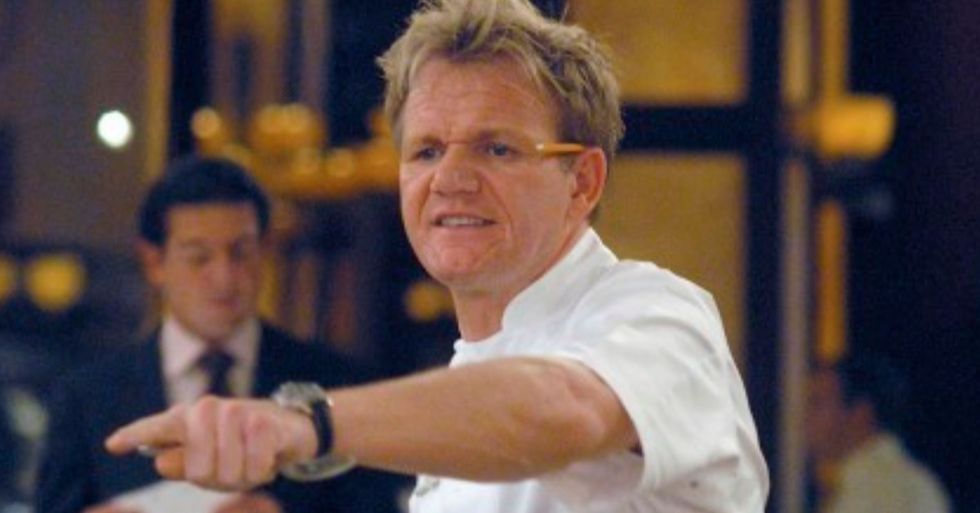 But his most recent antic is his most shocking yet. The star disguised himself as a woman to expose kitchen nightmares and the internet can't cope with it.

Keep scrolling to watch the clip fo the star in action.

Born in Scotland in 1966, Ramsay earned his stripes in many fine London establishments, before coming to the forefront of foodie TV in the ’90s.

Ramsay’s Kitchen Nightmares first aired in the UK on Channel 4 in 2004. On the show, Ramsay visited failing restaurants around the world and helped owners to spruce up their businesses in order to turn them into successful establishments.

But there's one thing we know for sure...

Nobody wants to mess with Gordon. The British cook is well known for his short temper and no-nonsense cooking style, and it's safe to say that he's pretty damn good at his job.

Gordon was raised in the South of England and initially aspired to be a pro-soccer player. But after obtaining a serious injury, he realized that his soccer career was over, which turned him to the world of cooking.

His cooking has taken him across the globe...

His new TV show, Uncharted, follows Gordon on his travels around the world, where he meets indigenous people and learns about their food and cultures.

Snippets of the show have been shared on the chef's Instagram...

One of the clips shows Gordon's visit to Peru, in which he tries a spirit that has been preserved with a dead gecko inside. And, believe it or not, Gordon praises the drink saying that "it actually tastes better!"

Whatever floats your boat...

Each to their own, right? Gordon is probably the most trustworthy chef ever, and if he claimed that it was "extraordinary..."  it must have been pretty damn extraordinary.

New delicacies have been discovered...

"I am coming to an age now where like professionally it is amazing. That pursuit for the culinary connect keeps me alive," he added. Discovering delicacies around the world is what Gordon is passionate about, and his most recent discovery is certainly unconventional.

Turns out, there's more than just cows and chickens when it comes to eating meat...

Who wants to have chicken for dinner when you can have guinea pig instead? Yep, you heard that right...

The popular furry pets, more commonly known as "cuy" in Peru, are a delicacy and their popularity has boomed over the last few years.

Traditionally, guinea pigs are served with their teeth and claws still intact as a kebab-style dish. This method puts many people off the delicacy however, so other alternatives have been created to serve the dish.

Eating a guinea pig, particularly in Western cultures such as ours, is something that is more than likely going to be frowned upon and will be pushed to the side in disgust. But Gordon has admitted to pushing his own boundaries for the new show, and trying a guinea pig was a big part of that.

Rustling up some guinea pigs...

Gordon has admitted to cooking some guinea pigs of his own for dinner in Peru, and the series will see him cooking and eating his unusual dish.

He claimed that the guinea pig was "delicious," and even said that us regular folk "don't know what we're missing." But we doubt that the furry pet will be appearing on our menus any time soon...

"I can't feature roasted guinea pig on my menus here in the US. I would be taken down," the fifty-two-year-old chef laughed when speaking to The Telegraph.

Some people weren't happy with the celebrity chef, however...

Many have taken to Twitter to bash Gordon on his decision to try the delicacy, even stating that he has "more money than brains."

Many viewers were upset by the method of cooking the guinea pigs...

Disgusting Gordon Ramsay's guinea pig meal how would he like to be cooked in the same manner NEXT? The FOUL Mouth Y… https://t.co/G7LxJDxHAl
— Carl Barron (@Carl Barron)1563804789.0

It's never nice to see how animals are actually cooked before we eat them, and seeing a popular family pet get cooked is bound to be a pretty horrifying sight.

Aside from being a celebrity chef, Gordon is known for his "interesting" way of dealing with people...

To me and you, a doughnut is a sweet-treat used to satisfy an unhealthy craving, but to Ramsay, it can be used to describe someone who only has a limited number of brain cells.

My feelings are a little hurt right now.

To be honest, this one is one of his tamer ones…

It seems as if Ramsey has a habit of comparing people’s food to sh*t.

Can donkeys even cook? That’s the real question.

I’d rather be a doughnut than something like this…

Here’s a piece of advice that no one should ever follow.

And obviously, we had to end it with a good ol’ classic.

I don't know about you, but I'm feeling a little attacked after all that.

But there’s no one feeling more victimized than these people…

But his most recent antic is his best yet...

The star went undercover to expose Kitchen Nightmares.  Keeps scrolling for the clip.

But this wasn't any old disguise...

Gordon dressed as a woman.

The hilarious stunt was pulled on the latest episode of 24 Hours to Hell and Back.

During the episode, the star snuck into the Southern Kitchen Restaurant in Richmond whilst dressed as a female book club attendee named Libby-Lou. "This family-run restaurant is located in a very busy intersection yet they can’t get those customers to go through their door. I will be going undercover as a member of a weekly book club," he says on the show. "Libby-Lou ready for a ladies’ lunch. Trust me, this one’s going to be a page-turner."

And as you'd imagine from the sharped tongued chef himself...

He gave them their fair share of tough love.

He was particularly unimpressed with the pork chop...

Which he claims was undercooked, while describing another dish as "tasting like cough medicine." Brutal.

The star's comments were flooded with reactions to his all-out disguise.

Reactions were mixed, to say the least.

Many found it hilarious while some thought he was totally unconvincing.

Watch Gordon (or should we say Libby) in action below:

Fingers crossed Libby will be making a return in future episodes. Gordon recently hired a very famous singer to perform at his daughter's birthday bash. Keep scrolling to find out more. You won't believe how much money he forked out...