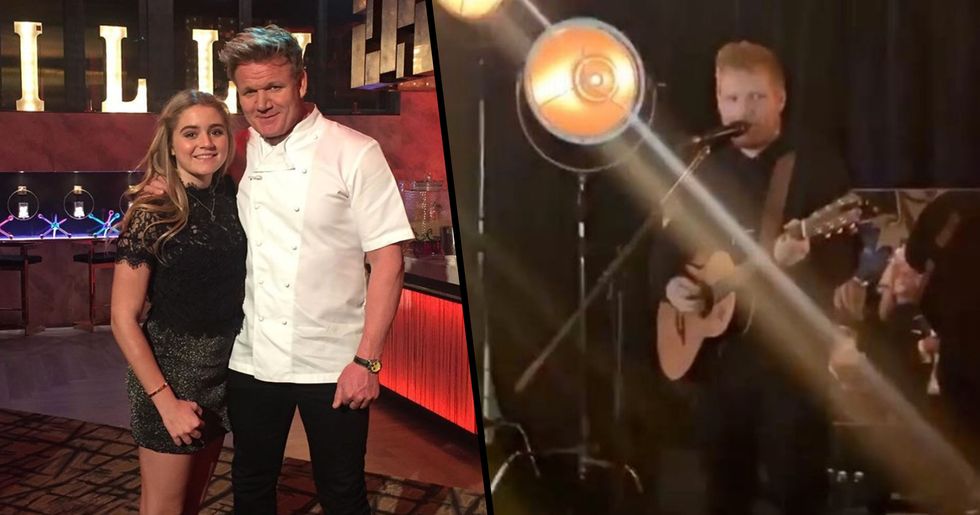 His star-status has likely earnt him quite a few celebrity contacts. So who does he call up to perform at his daughter, Matlida's, eighteenth birthday bash? The one and only Ed Sheeran, of course!

Ramsay has well and truly gone all out for his daughter's special day. The party was nothing short of extravagant and Sheeran truly topped it off. After all, who else can say that Ed Sheeran performed for their birthday?

Sheeran wasn't the only thing to make this party top the ranks. Keep scrolling to get an inside look at the expensive soiree.

Born in Scotland in 1966, Ramsay earned his stripes in many fine London establishments, before coming to the forefront of foodie TV in the '90s.

Ramsay's Kitchen Nightmares first aired in the UK on Channel 4 in 2004. On the show, Ramsay visited failing restaurants around the world and helped owners to spruce up their businesses in order to turn them into successful establishments.

While Ramsay is an undeniably talented chef and businessman, there's another reason for his television success.

He's known for having a hilarious, made-for-TV persona. Ramsay is often exceptionally grumpy, angry, feisty, or furious - and he certainly isn't afraid to say what he really thinks.

At times, Ramsay becomes a parody of himself.

This iconic scene (which is actually from the parody skit "Hell's Cafeteria" from The Late Late Show) is one of the internet's favorite Ramsay moments - and it makes for a great meme!

In spite of his reality TV pedigree, though, Ramsay is, first and foremost, a chef.

His restaurants around the world are known for their culinary perfection, and Ramsay has been awarded an incredible sixteen Michelin stars over the course of his career.

On top of all of this, Ramsay is also a family man.

He married his wife, Tana Hutcheson (an ex-teacher), in 1996, and the pair have four children together, born between 1998 and 2001. Ramsay has also spoken publicly about a miscarriage that they had suffered in 2016.

She was born in 1998, making her twenty-one years old. She's currently studying psychology at Oxford Brooks University in the U.K.

Next in order is second daughter, Holly.

Holly was born on New Year's Day in the year 2000, making her nineteen. She's currently living between the U.K. and U.S.A to spend time with her family.

Holly is actually a twin.

As you may expect, her fraternal brother, named Jack Scott Ramsay, shares the same birthday, but he is a few minutes younger. Here's Jack with his famous father in 2013.

Last but not least is Matilda.

Born in 2001, Matilda is the youngest of the Ramsay clan. She seems the most likely to follow in her father's television-related footsteps and has already had multiple TV appearances including This Morning and Masterchef Junior.

She turned eighteen on November 8th and Ramsay went all out for his daughter's special day, throwing a huge party last Saturday.

Saturday night's party was nothing short of extravagant.

The Cuckoo Club in Mayfair, London was kitted out in James Bond themed regalia, with drinks topped with Matlida's face or the classic 007 logo and even a 007 ice sculpture.

But the star of the show came from the musical entertainment.

Using his star-status, Ramsay whipped out his celeb phonebook and called up Matilda's favorite singer to perform at her bash.

Ramsay scored the one and only Ed Sheeran to perform at Matlida's party as the ultimate gift to his youngest daughter.

Sheeran, who is currently on a musical hiatus, came at a hefty price...

Ramsay reportedly forked out a whopping $650,00 to secure the "Shape of You" hitmaker for the night.

The singer belted out 5 songs for the teen.

He also performed a personalized rendition of "Happy Birthday," at the end of the private gig.

According to an insider source, it "meant the world" to Matlida that her favorite star was there.

"Tilly’s bash was next level. It was clear Gordon had spared no expense in making sure it really was a night to remember," an insider source told The Sun. “Ed is Tilly’s favorite singer so it meant the world to her that he was there, even though his set didn’t come cheap."

It looks to have been a truly wonderful night.

Sheeran may well have taken time out of his schedule to perform at Matilda's party, but the star is currently on an "extended break from music." Keep scrolling to find out what prompted his hiatus and what this means for fans.