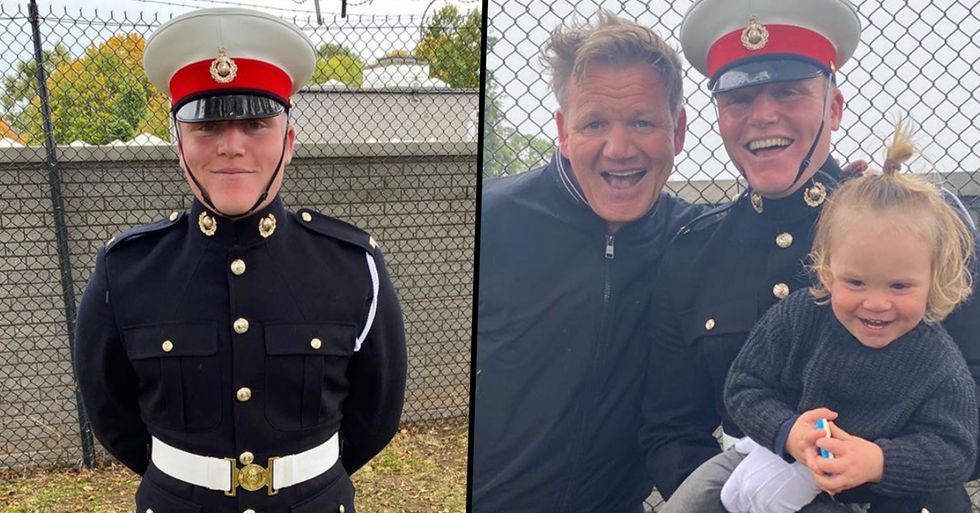 Gordon Ramsay recently announced that his son, Jack, has joined the Royal Marines and it has made him the proudest father.

And, of course, along with insulting other people's cooking, he decided to share the moment with us.

The post was truly heartwarming and shared some personal snaps of his son, Jack...

Who has recently joined the Royal Marines.

Gordon Ramsay appears to have it all: a family and a career.

With his successful restaurant chain and high flying TV career, the star seems to be truly on top of his game.

Ramsay is one of television's most beloved chefs.

The king of angry cheffing has become well-loved - if not a little feared - for his short temper and no-nonsense cooking style.

Ramsay earned his stripes in many fine London establishments, before coming to the forefront of foodie TV in the ’90s.

But there are 2 main shows that helped to make Ramsay a household name.

Ramsay’s Kitchen Nightmares first aired in the UK on Channel 4 in 2004. On the show, Ramsay visited failing restaurants around the world and helped owners to spruce up their businesses in order to turn them into successful establishments.

There's no doubt the star possesses a sheer talent in the kitchen.

When it comes to cooking amazing food, Ramsay isn't afraid to put people well and truly in their place.

Budding chefs know too well to not get in Ramsay's way.

But this is because he's an expert at what he does...

Which is evident from the huge $15.4 million profit he made last year, despite him working for free!

But that's not all, he also has Savoy Grill and Gordon Ramsay Plane Food at Heathrow in the UK, as well as 10 other smaller ventures.

Over the next 5 years, he wants to open two-hundred restaurants in North America, Canada, and the Caribbean, as well as two-hundred in Asia, and fifty sites in the UK.

His restaurant chains Bread St Kitchen and Maze are the most popular in the UK.

Brits travel from all across the country to dine in his restaurants.

It's estimated that they spend over £1 million a week eating his food...

With an annual turnover in the UK of £49.3 million.

His rival, Jamie Oliver’s restaurant chain hasn't had the same luck, as it went into administration last year...

All the while Gordon is planning world domination.

They're planning on opening his restaurants here in the US...

But aside from his shining career, Ramsay is a big family man.

He married his wife, Tana Hutcheson (an ex-teacher), in 1996, and the pair have 5 children together.

The twenty-two-year-old is currently studied psychology at Oxford Brooks University in the U.K.

Here is his second daughter, Holly.

Holly was born on New Year’s Day in the year 2000, making her twenty. She’s currently living between the U.K. and U.S.A to spend time with her family.

Next up we have Matilda.

Born in 2001, Matilda is the second youngest of the Ramsay clan. She seems the most likely to follow in her father’s television-related footsteps and has already had multiple TV appearances including This Morning and Masterchef Junior.

Then we also have a little one, Oscar.

The tot was born last year and even has his own Instagram account full of adorable snaps.

But what most people forget is that Holly is actually a twin.

As you may expect, her fraternal brother, named Jack Scott Ramsay, shares the same birthday, but he is a few minutes younger.

While he remains largely out of the limelight, this time, he made headline news.

Gordon Ramsay recently uploaded a heartwarming post in which he described himself as "the proudest father" after his son joined the Royal Marines.

"Can’t tell you enough how proud I am of this young man Jack Ramsay you’ve made me feel like the proudest father today congrats on joining @royalmarines what amazing achievement."

It truly is an amazing achievement.

And alongside the cute caption, he also shared some snaps with his family.

And if that wasn't enough, David Beckham also commented on the post saying how proud he and his family were of Jack too!

Now that's what dreams are made of.

If you're in the mood to see what Gordon Ramsay does best, then keep scrolling...