But the one thing Gordon is very rarely criticized for... | 22 Words 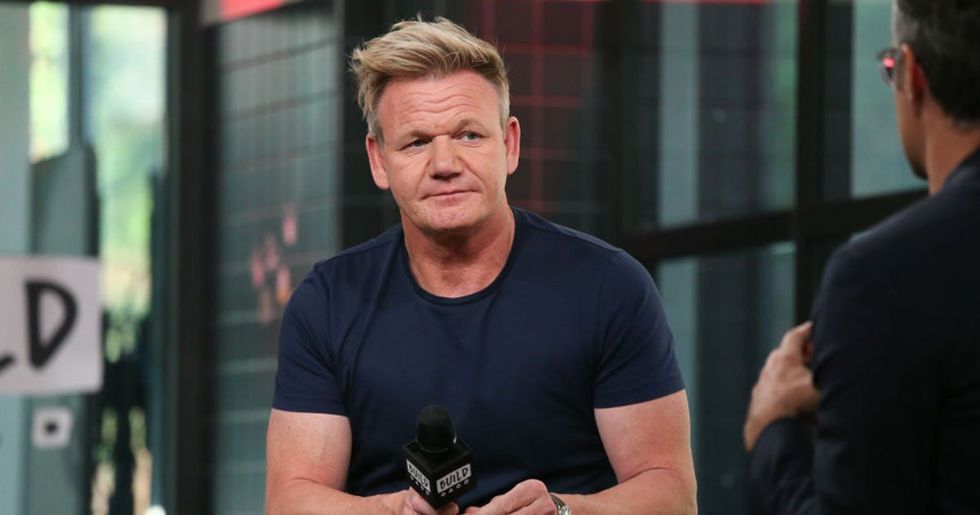 Gordon Ramsay, the king of angry cheffing, has finally come under fire for something that isn't his temper. I know, the day we thought would never arrive, has indeed arrived.

The hot-headed chef shared a video of one of the dishes from his restaurant, the Gordon Ramsay Bar and Grill, to his Twitter account, and his followers were not at all impressed with how he'd cooked the meal, and have even gone as far to brand the chef as "disgusting".

Keep scrolling to see the incriminating video, and what people are so disgusted about...

Nobody wants to mess with Gordon...

Gordon Ramsay is one of the hottest chefs in the world. The British cook is well known for his short temper and no-nonsense cooking style, and it's safe to say that he's pretty damn good at his job.

Born in 1966, Gordon was raised in the South of England and initially aspired to be a pro-soccer player. But after obtaining a serious injury, he realized that his soccer career was over, which turned him to the world of cooking.

Gordon is best known for his TV shows.

One of his most popular shows is Kitchen Nightmares, a show wherein Gordan helps restaurant owners to revamp their crumbling kitchens and transform them into the best places to eat in America. But of course, Kitchen Nightmares never falls short in its bad language and temper tantrums. Let's not even get started on Hell's Kitchen...

He also isn't afraid of a little controversy...

With his colorful language and explosive temper in the kitchen, Gordan is forever coming under fire for his behavior towards other chefs.

Gordon's semi-regular melt-downs are quite renowned...

So people know not to get on the wrong side of this hot-headed chef.

His temper is what Ramsay is criticized for the most...

Glamourising this kind of bull shit really sets us back. No wonder we can’t find any chefs. https://t.co/QRnwI1bnXO
— Stevie Parle (@Stevie Parle)1523825828.0

Despite his foul-mouthed rants being the best selling point on his TV shows, many have labeled the chef as a "bully", and have slammed him for giving actual chefs the wrong kind of reputation.

But the one thing Gordon is very rarely criticized for...

Is his cooking. Despite his fiery temper, it is undeniable that Gordon is an extremely talented cook.

But his most recent controversy involves one of his own dishes...

Fans have been slamming the celebrity chef after he shared a video of one of his steaks, and have even gone as far as to call him "disgusting" for how he's cooked the piece of meat...

Now, how to have a steak cooked is a universally debated question.

Some like their steak medium-rare, some prefer their meat to be a little more on the pink, while others enjoy the sensation of chewing on an old leather boot (well-done people, I'm looking at you).

But many seem to be in agreement over Gordon's steak...

And they're all saying the same thing... Well, they're directly quoting the man himself, by slamming the steak as completely "RAW"!

Gordon shared a quick video of the Côte De Boeuf (or rib steak, to us less culinarily cultured folk) from the Gordon Ramsay Bar and Grill menu.

It looks like a perfectly delicious steak, doesn't it? He captioned the tweet, "Just look at that côte de boeuf at Gordon Ramsay Bar and Grill.... cooked to perfection!!"

But not everyone agreed with just how perfect the steak was cooked...

Many Ramsay fans are not impressed and have branded the steak as "undercooked" and even "raw".

Many were grossed out by the pinkness of the meat...

And, of course, social media users were quick to use his own iconic "IT'S RAW!" statement against him.

The cow jokes came flooding in.

And some were quite concerned about the salt...

There were a few to stick up for Gordon's cooking skills...

Noting that this is exactly how a steak should look, with one fan coming to the chef's aid by saying, "The best way to eat it," and another commenting, "Beautiful gordy."

When has he ever let anyone's opinion phase him? Keep scrolling to read about more Ramsay's controversial cooking moments...