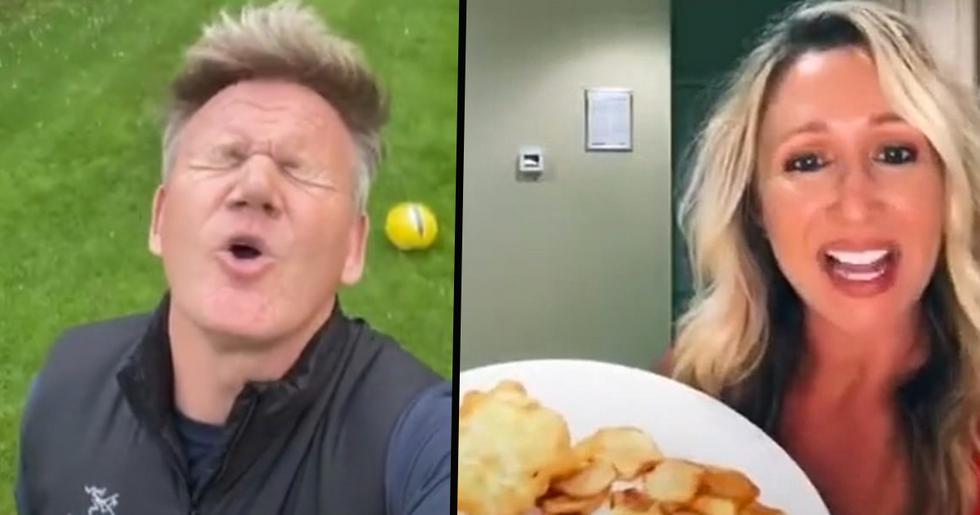 A U.S. woman has come under the intense fire of Gordon Ramsay this week after she showcased her diabolical - yet brave - attempt at making authentic British fish and chips...

Nobody wants to mess with Gordon Ramsay.

Gordon Ramsay, the king of angry cheffing, has become well-loved - if not a little feared - for his short temper and no-nonsense cooking style.

Gordon possesses a sheer talent in the kitchen.

But the majority of his fame comes from his hugely successful TV shows.

One of his most popular shows is Kitchen Nightmares, a show wherein Gordon helps restaurant owners to revamp their crumbling kitchens and transform them into the best places to eat in America. But of course, Kitchen Nightmares never falls short in its bad language and temper tantrums. Let's not even get started on Hell's Kitchen...

When it comes to cooking amazing food, Gordon isn't afraid to put people well and truly in their place.

Budding chefs know to well to not get in Gordon's way.

Well, most of them do, anyway.

Because this week, one U.S. woman found herself directly in Gordon's firing line after she showcased her method of making authentic British fish and chips from home.

Now, this amateur chef is no stranger to online controversy.

Michelle, an American living it large in the United Kingdom, dedicates her social media channels to educating her fellow American's on British food and culture.

But, more often than not, her overly enthusiastic culinary ventures land her in dangerously hot waters.

Who remembers when she showed the world how we make iced tea? That sugary concoction still haunts my dreams.

Or how about the time she offended the whole of the U.K with her "British tea" recipe?

If any Brits are reading this... We are so sorry.

Anyway, Michelle recently ventured into an even more perilous territory...

The fish and chips zone. As you will all be aware, the Brits hold their beer-battered fish and chips extremely close to their hearts, so god forbid anyone dares to mess with it.

So, of course, Michelle's take on the dish hasn't sat too well with the British public.

Maybe it's because she instructed her followers to catch their fish from their "local watering hole?"

Or maybe it's because she literally sawed the fish's head off on her chopping board?

This woman has no shame.

She then whipped up a putrid looking batter mixture from flour, copious amounts of sugar, eggs, and root beer...

And, upon soaking the sorry-looking fish in the batter, Michelle resorted to her signature move.

She threw the plate of raw fish and potato into her microwave for twenty whole minutes.

Okay, clearly the whole thing is one massive joke - but, of course, the British public has been left livid by the video, as has their beloved chef, Gordon Ramsay.

Now, Gordon is no stranger when it comes to rating other people's dishes.

For years now, people have been sending the chef photos of their meals on Twitter, just for him to mercilessly roast.

And Michelle's video has fared no differently.

Gordon posted a video onto his TikTok account where, alongside her disastrous fish and chips video, he provided his own, Ramsay-esque commentary. At first, he seemed intrigued but, of course, that mood soon dissolved.

Straight away, Gordon expresses his distaste with Michelle's fishing method and exclaimed in horror when she roughly scrubbed the lifeless fish in her sink.

He wasn't impressed with the batter either...

"In the microwave, are you kidding me?!"

As you could imagine, Gordon was not happy at the sight of Michelle's infamous microwave.

"There's nothing British about that."

You can watch the full video here. For more on the infamous chef, keep scrolling to see the moment a Thai cook completely tears apart his Pad Thai...