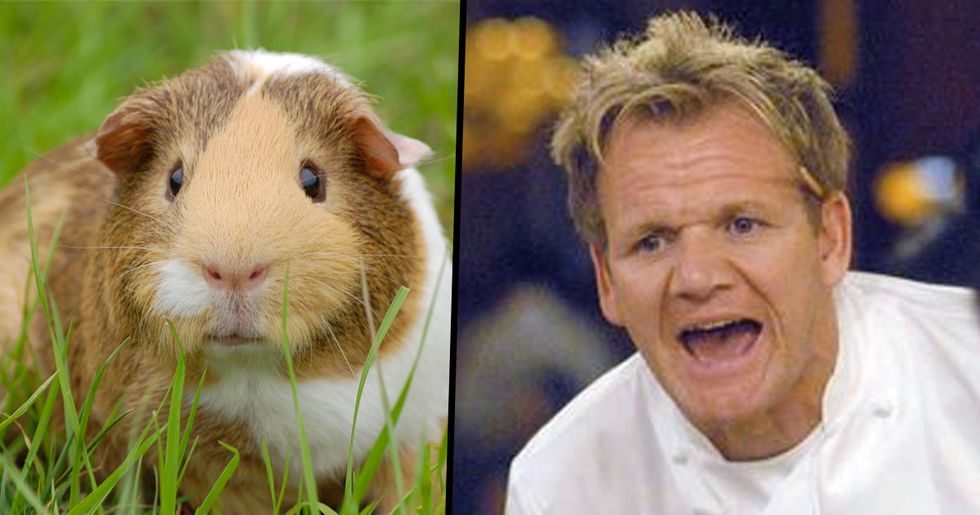 Is there anything that super chef, Gordon Ramsay, hasn't cooked?

You name it, he's cooked it. Whether that's beef, lamb, chicken, venison, or any type of seafood imaginable, Gordon has been there.

But what about our furry rodent friends?

We can't imagine that a Guinea Pig would be the best addition to a hearty meal, but Gordon is here to prove us all wrong. Folk aren't best pleased about these little critters being placed upon the BBQ, however...

Keep scrolling to learn about Gordon's recent adventure and how it came to involve the much-loved Guinea Pig...

Nobody wants to mess with Gordon...

Gordon Ramsay is one of the hottest chefs in the world. The British cook is well known for his short temper and no-nonsense cooking style, and it's safe to say that he's pretty damn good at his job.

Born in 1966, Gordon was raised in the South of England and initially aspired to be a pro-soccer player. But after obtaining a serious injury, he realized that his soccer career was over, which turned him to the world of cooking.

Gordon is best known for his TV shows.

One of his most popular shows is Kitchen Nightmares, a show wherein Gordan helps restaurant owners to revamp their crumbling kitchens and transform them into the best places to eat in America. But of course, Kitchen Nightmares never falls short in its bad language and temper tantrums. Let's not even get started on Hell's Kitchen...

His cooking has taken him across the globe...

His new TV show, Uncharted, will be aired on National Geographic, and it follows Gordon on his travels around the world, where he meets indigenous people and learns about their food and cultures.

Snippets of the show have already been shared on the chef's Instagram...

One of the clips shows Gordon's visit to Peru, in which he tries a spirit that has been preserved with a dead gecko inside. And, believe it or not, Gordon praises the drink saying that "it actually tastes better!"

Whatever floats your boat...

Each to their own, right? Gordon is probably the most trustworthy chef ever, and if he claimed that it was "extraordinary..."  it must have been pretty damn extraordinary.

Gordon has confessed that his new show isn't exactly a cooking show...

According to The Telegraph, the chef claimed that it is an adventure into the world of food, which he describes as "the best connection in the world."

New delicacies have been discovered...

"I am coming to an age now where like professionally it is amazing. That pursuit for the culinary connect keeps me alive," he added. Discovering delicacies around the world is what Gordon is passionate about, and his most recent discovery is certainly unconventional.

Turns out, there's more than just cows and chickens when it comes to eating meat...

Who wants to have chicken for dinner when you can have guinea pig instead? Yep, you heard that right...

The popular furry pets, more commonly known as "cuy" in Peru, are a delicacy and their popularity has boomed over the last few years.

Traditionally, guinea pigs are served with their teeth and claws still intact as a kebab-style dish. This method puts many people off the delicacy however, so other alternatives have been created to serve the dish.

Eating a guinea pig, particularly in Western cultures such as ours, is something that is more than likely going to be frowned upon and will be pushed to the side in disgust. But Gordon has admitted to pushing his own boundaries for the new show, and trying a guinea pig was a big part of that.

Rustling up some guinea pigs...

Gordon has admitted to cooking some guinea pigs of his own for dinner in Peru, and the series will see him cooking and eating his unusual dish.

He claimed that the guinea pig was "delicious," and even said that us regular folk "don't know what we're missing." But we doubt that the furry pet will be appearing on our menus any time soon...

"I can't feature roasted guinea pig on my menus here in the US. I would be taken down," the fifty-two-year-old chef laughed when speaking to The Telegraph.

Some people aren't happy with the celebrity chef, however...

Many have taken to Twitter to bash Gordon on his decision to try the delicacy, even stating that he has "more money than brains."

Many viewers were upset by the method of cooking the guinea pigs...

Disgusting Gordon Ramsay's guinea pig meal how would he like to be cooked in the same manner NEXT? The FOUL Mouth Y… https://t.co/G7LxJDxHAl
— Carl Barron (@Carl Barron)1563804789.0

It's never nice to see how animals are actually cooked before we eat them, and seeing a popular family pet get cooked is bound to be a pretty horrifying sight.

But, at the end of the day, a culture must be respected, even if we don't agree with it...

Eating guinea pigs is a part of Peruvian culture, and it can be argued that eating cows and pigs is no different to eating the fluffy little rodents. Uncharted has been constructed around embracing cultures and cuisines that are found all around the world, and Gordon is simply taking part and trying new things in order to learn about these incredible delicacies.