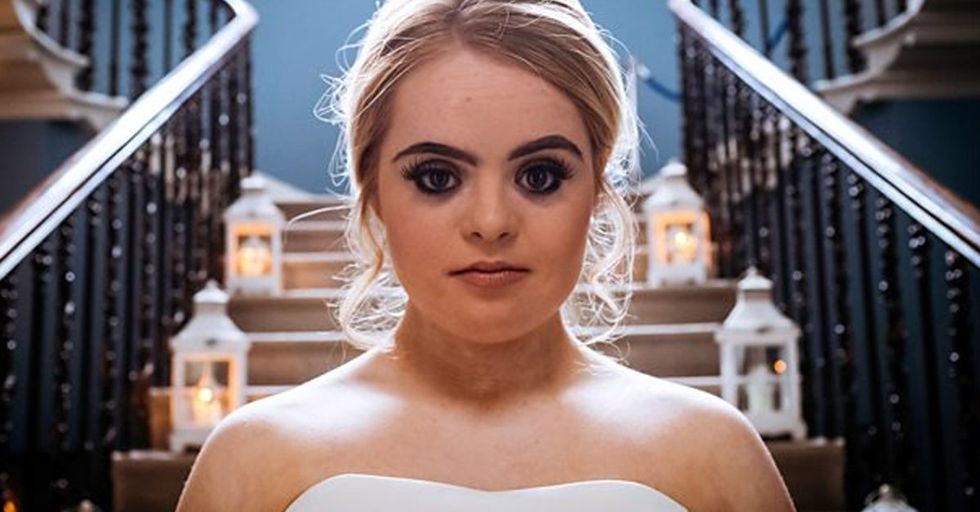 A few people inside the fashion industry have been making a push for inclusivity. And recently, that push is visibly paying off! We're seeing more and more people represented through fashion, in terms of body type, ethnicity, and more.

That progress is super important; we need to see more of the world reflected in fashion! So it's especially notable that a model with Down Syndrome is making waves. Inclusive marketing campaigns are less of an anomaly these days, and here's another example! Because this particular model is the new face of Benefit Cosmetics.

Keep reading and find out all about this new campaign and the model leading it. Her story is absolutely amazing, and her glowing smile will bring one to your face too!

It's been there for a very long time: despite calls for change, the same kinds of models crop up over and over again. Instead of diversity, we see white models with one body type, one skin type, and complexion.

Time to change that.

People are asking to see models of varying skin tones, models of every body type, and beyond. And in some cases, those demands are finally being satisfied!

And she's only just gotten started. But in 2018, Kate was crowned champion in the Teen Ultimate Beauty Of The World pageant!

She's also modeled on the catwalk for Belfast Fashion Week, and appeared on ITV show This Morning.

She's got plenty of supporters.

Since winning her crown in 2018, Kate's social media presence (and thus, social media following) has grown a ton!

Because Kate is the newest brand ambassador of Benefit Cosmetics, a company with its makeup sold in over 2,000 shops and more than 30 countries.

And unsurprisingly, people are all about it. For a long time, the fashion industry has used the same type of model constantly; new and diverse finds like Kate are an amazing step forward.

Benefit has already released pictures of Kate being a flawless "wing woman" and they've taken off!

You might be able to guess what she's modeling:

Kate is being featured in a Benefit campaign for the company's Roller Liner liquid eyeliner.

She's not alone, either.

Kate is one of four models chosen for the campaign, and she was absolutely thrilled when breaking the news. It's an appropriately diverse lineup (this is model Amma Rhode, BTW).

Here's how Benefit found her:

Kate was actually featured in a BBC One Northern Ireland documentary, which aired last summer.

It's her success story.

As you can imagine, breaking into the fashion industry as a model isn't easy. Kate and her mother allowed cameras to follow her for six weeks as she did just that.

The whole documentary is called True North: Role Model. And Benefit magically happened to come across clips of it!

Clearly, they were inspired.

"We discovered Kate by chance in the summer of 2018 when we saw a Facebook video about her journey to becoming a model," said a Benefit representative while speaking to the Daily Mail.

How's that for a happy accident?!

"We fell instantly in love with her," the representative added. "Her amazing energy was so infectious and we were captivated by her incredible zest for life and determination."

"She embodied everything we stand for as a brand so we knew we had to find a way to work with her."

And Benefit doesn't want the partnership to stop here.

"We hope [Kate's] involvement goes some way to show that beauty and makeup shots can absolutely feature people from all walks of life," said the representative.

Benefit wants to be one of the companies at the forefront of change.

"The beauty industry is changing and we love that people like Kate are leading the way," the representative concluded.

"She is paving the way for people coming behind her," her mother, Deidre, told Metro.

Because Kate stands for more than just herself.

"Kate is aware of that and wants to spread awareness about inclusion for people with disabilities and that is what she has done from the very start," Deidre added.

Not everyone's voice can be heard as well as Kate.

"She is aware that she is able to do that in a way some of her friends cannot," Deidre said. "She is using her voice for them."

"She has a great drive to be a supermodel," Deidre continued. "I love her optimism and as her mum I would always be there to support her in that optimism."

Kate's sunny outlook has definitely helped her along the way.

"When you are young, you think the sky is the limit," Deidre said, "and with Kate, she does not have the understanding that we have, that there are obstacles in the way."

Because Kate doesn't see her condition as a deterrent.

"She does not allow obstacles to be in the way or her disability to stand in the way," Deidre proudly said. "She would say Down’s Syndrome does not define me — I am Kate."

And Kate has lofty goals.

Lofty, but totally doable for the dedicated young model. She's already listed out on social media her goals for 2019.

She'll be having a busy year in pursuit of those goals.

Kate's plans include appearances at both London and Paris fashion weeks, and landing a magazine cover.

And, of course, the biggest one:

Kate plans to continue spreading her message of diversity and inclusivity, across the fashion industry (and every industry).

Her many fans will surely be watching as Kate works towards a more positive and welcoming era in fashion. Share this story with other fashionistas who would love this model's success story!