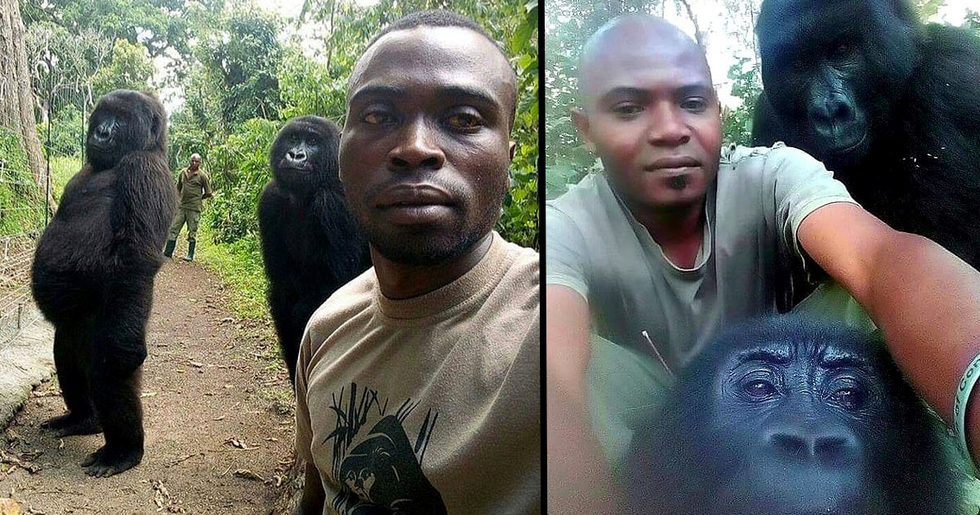 Gorillas Pose for Selfies With Anti-Poaching Rangers in Congo

You spend hours trying to get the perfect selfie; changing the lighting, trying out different angles and working on your best pouting pose and then an unknown ranger from Congo comes along and wipes the floor with you.

Meet Mathieu Shamavu, a park ranger at the Virunga National Park in Eastern Congo, who has taken social media by storm by posting a series of selfies with two mountain gorillas.

And it's not his proximity to these posing primates that has got people talking but the unusual stance that the gorillas have positioned themselves in.

But don't just take our word for it; check out these incredible images for yourself below.

Warning: This post contains a large amount of cuteness. Be prepared to say ahh a lot.

See we told you. Cuteness overload and we've only just got started.

The Democratic Republic of Congo is home to many endangered species including forest elephants, chimpanzees, and bonobos. And in case you didn't know, a bonobo traditionally called a pygmy chimpanzee is an endangered great ape that can be identified by its pink lips and dark face as seen above.

As well as being home to several species of gorilla.

Virunga National Park, which is a UNESCO world heritage site that can be found in the Albertine Rift Valley, was founded in 1925.

It was one of the first protected areas in the whole of Africa.

And is home to an estimated 281 mammal species including 706 bird species, 109 reptiles, and 65 amphibians.

Including an impressive 400 gorillas.

Who roam between Virunga and Uganda's Mgahinga Gorilla National Park. In fact, Virunga is home to more than half the world's population of mountain gorillas.

The population of mountain gorillas has increased by a quarter to over 1,000 since 2010. And hopefully, they will continue to thrive and grow as a species.

The park has a rich and diverse ecosystem.

Which includes block mountain, the Albertine rift, rainforests, woodlands, crater lakes and swamp and wetland vegetation. Plus, it's gorgeous to look at.

Mount Nyiragongo can also be found there.

Nyiragongo is one of Africa's most notable and active volcanoes which erupted in 2002 killing 147 people and causing 40,000 to be evacuated from the nearby city of Goma. It is also home to a dormant volcano, Mount Mikeno.

The park is cared for by 600 rangers.

These dedicated rangers are all from local towns and villages and have to undergo extensive training in order to be able to look after all these endangered species without coming to any harm.

But this can be particularly difficult as there is ongoing conflict in the area due to a lack of resources.

Eastern Congo, where Virunga is situated, is one of the most disadvantaged areas in the world and therefore competition for the Park's natural resources has always been strong.

In fact, 179 rangers of this particular park have died whilst trying to safeguard the animals with over 130 dying since 1996.

Three men have died since March this year already.

Hakizimana Sinamenye Chadrack was tragically killed on March, 29, by a hippo whilst trying to collect water from the edge of a river. In a press release following his death, the park said: "Hippos are magnificent animals but they are wary of humans, especially given the increase of poaching hippos for their ivory teeth. In this case, it was a hippo mother who had a calf with her."

Poaching and animal trafficking are very big problems in Congo.

The animals that live in Virunga are constantly under threat of being hunted by poachers who want to sell them as bushmeat. Like this baby chimpanzee who was thankfully rescued before she could be sold on the black market.

And another ranger was killed just a few days later by a force of nature.

Abase Carrimo, a ranger from Mozambique was carrying out his duties when he was struck by lightning which sadly resulted in his death.

And in early March, a brave ranger was killed protecting the park and the species within.

Ranger Freddy Mahamba Muliro was killed in the line of duty in the park's troubled Central Sector. The Park Director, Emmanuel de Merode, said at the time: "It is a tragedy that his young life was cut short in dedicated service to Virunga. Now more than ever, Ranger Freddy's death highlights the very real threats to our rangers in their protection of Virunga National Park."

In fact, the risk to the rangers became so high last year that the park had to close temporarily.

Last June the park was closed due to several security concerns following an ambush by suspected rebels that killed five rangers and was not reopened until February of this year. But clearly, security matters have not been fully resolved as rangers are still being killed whilst trying to do their job.

But despite the risks, the rangers are as dedicated to the animals as ever.

And they seem to be particularly protective of the gorillas that call the park their home.

These gorillas have to undergo a process called habituation.

Which is how they become accustomed to being around people. This process can take between two to three years and involves the Rangers visiting the gorillas on a daily basis.

This is a vital process in the conservation of the gorillas.

As not only does it allow the Rangers to carry out research on them but also allows veterinary workers to intervene and treat the animals if they become injured or unwell. Oh and if you think this picture is cute, just wait until you see the ones of the gorillas standing up with their 'parents'. . .

They even have a designated center for baby orphaned gorillas.

But the park depends on the generosity of strangers to keep going.

Without donations from individuals and organizations, the park and its staff would not be able to carry on doing the amazing work that they do.

And it was with this in mind, that one of the park's rangers took to social media to share some special selfies to raise awareness of the park.

And in particular, to raise awareness of the incredible creatures that they fight to protect on a daily basis.

And posted them to social media with the caption "another day at the office."

The two gorillas featured in the pictures are in fact orphans themselves.

They were just two and four months respectively when both their mothers were killed in July 2007.

They were taken to the Senkwekwe Centre and brought up the rangers who they now think of as their parents.

And this is why the gorillas can be seen standing up on two legs; they are imitating the rangers and trying to appear human. The one on the left almost appears to be in a strut pose lol.

According to the Deputy Director of Virunga, this is very unusual behavior.

He said: "I was very surprised to see it . . . so it's very funny. It's very curious to see how a gorilla can imitate a human and stand up."

The post was shared to the group Elite Anti-Poaching Units & Combat Trackers.

And has been shared over 20,000 times with many applauding the work that they do and pledging to donate.

With former journalist and current UN worker Yvonne Ndge calling it the Selfie of the Year.

Yvonne had previously visited the park but had not been able to get this up close and personal with the gorillas.

And it shows just how close these gorillas are to the rangers that have cared for them since they were babies.

These orphans would have struggled to survive in the wild without their mothers and are now so used to human contact that they will happily pose with the rangers for a selfie or two.

And hopefully, these amazing creatures will continue to be cared for by these hard-working and brave rangers.

For more information on the work that they do and for details on how to donate, visit Virunga.org Help them stop these amazing animals from suffering any more than they already have!