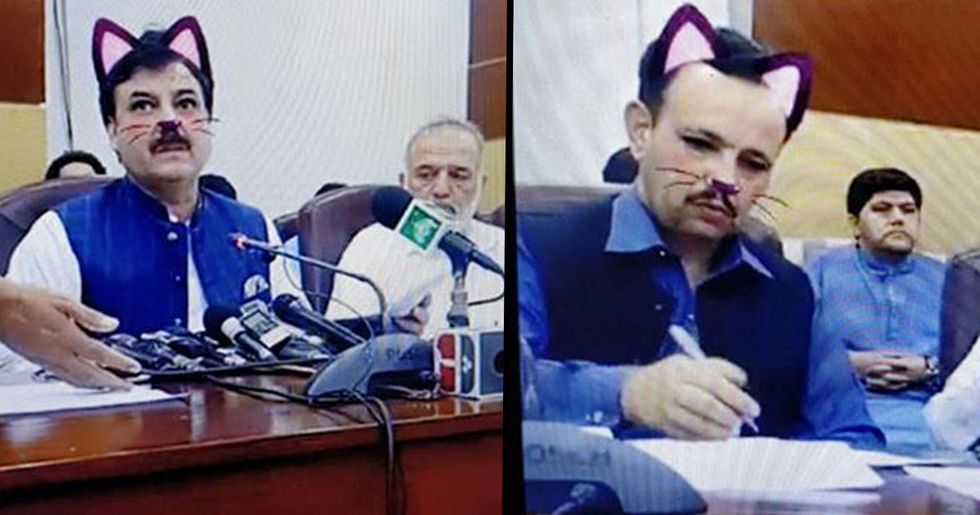 We all love a good Snapchat filter. Even on your worst days, you can look half decent with one of these babies. Got a breakout? There's a filter that'll sort that out for you. Maybe you couldn't be bothered putting any makeup on. A Snapchat filter can do all the hard work for you. Are you just tired of your entire face altogether? Weirdly enough, Snapchat's got your back for that weird problem, too.

Whether it's the filter that puts pink hearts on your head or just a classic face-swap, there are so many things that you can do with the filters on Snapchat. And it seems as if one politician just couldn't get enough of them.

Watch the hilarious moment wherein the cat filter became the center of attention during a live press conference.

This isn't the first time that Snapchat filters have humiliated politicians...

We've all heard about the slightly controversial "gender-swap" filter that Snapchat recently introduced (and if you haven't, have a read about it at the end of this article). It gave us some hilarious new memes, but also stirred a bit of tension in the Transgender Community.

But, overall, it made us realize that we'd look terrible as the opposite gender.

And so would these politicians. ALP Spicy Meme Stash did a feature in which they gender-swapped some well-known Australian politicians.

Here's Julia Gillard as a man.

One person commented that he "always thought she would make a handsome bloke" and, weirdly, I agree. Gillard's shot was one of the more... flattering ones.

Slightly disturbing, but here's Tony Abbott as a woman...

I can't unsee this one and I really wish I could. The comments were pretty savage too, with one person claiming  that he looked like a "budget store Gwyneth Paltrow." Oh, God!

And there's this weird one of Peter Dutton.

This image gained a mixed reaction from spectators, some commenting things like: "He looks as cute as a Dutton". Pretty smart, I'll give you that one. Others were left scarred by the image. One Facebook-user couldn't help but emphasize his resemblance to Mrs. Potato Head. Ouch.

Some individuals went even further.

A number of people even started making their own profiles of Dutton as a woman. Someone claimed that "she" looked like a person "who would ask to speak to the manager," while another said she looked like "a Veronica, [who] probably works for Dad’s real estate firm [at the] front desk reception." Very accurate, I must say. But that's not the most hilarious thing that's happened to a politician as a consequence of a Snapchat filter.

A Facebook Livestream of a press conference garnered much attention recently and not for the reasons that you might expect.

Politicians are typically known for making false promises and for the occasional controversial comment. They're not really known for having a good sense of humor, unless they're back-tracking on a stupid comment that they made by saying that it was "supposed to be a joke."

This is Pakistani politician, Shaukat Yousafzai, who was the center of all this chaos.

Imagine him with pink cat ears and black whiskers.

Yes, you read that right. What you're picturing right now is probably something a little like what this politician looked like on his Facebook Livestream recently.

His social media team made an embarrassing, yet hilarious, mistake.

Yousafzai made headlines for having a cat filter projected onto him throughout the entire length of his Facebook Livestream while talking to journalists. He admitted it was a mistake on behalf of his team and tried to deflect attention away from him by saying that said it wasn't just him that was affected by the filter. Two other officials were also hit with the feline features, but Yousafzai was the main victim of the ordeal. Watch the video below!

And, obviously, no one could even tell him that it was there until after the livestream was over.

The saddest thing is that no one could have warned him. I mean, it's not like any of the journalists in front of him could see it, but everyone online could! He saw the content after logging back into Facebook afterwards.

Anyway, the latest victim of the Snapchat filter assault seemed to take it pretty well.

Even though the video was deleted from the Pakistan Tehreek-e-Insaf's (PTI) page minutes after it was released, the internet managed to get multiple copies of it. Never underestimate the good ol' internet.

Shaukat Yousafzai commented on the situation, letting people know that it was an accident.

Even though he probably wanted to forget about the whole thing, he had no choice but to comment on the issue. He said that it was an accident and that people shouldn't "take everything so seriously". We get it, Shaukat, just say that you're embarrassed and move on. Let us have our fun with it.

Here's a look at the full length of the video.

Come on, you have to admit, it's pretty funny!

I don't think he'll ever live this one down.

From this day on, everyone will know him for this moment. Rather than trying to bury it, I think he should just embrace it. Filters are a gift for all of us to enjoy. But, sometimes, they can cause issues for certain social groups, as one of them did recently. Continue reading to hear about how the gender-swap filter caused tensions in the transgender community.