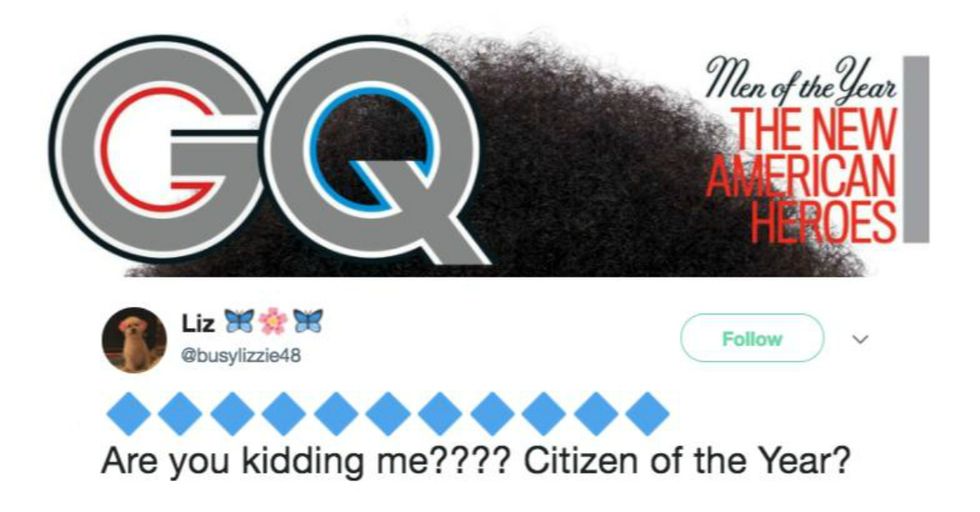 Colin Kaepernick started a movement in late 2016 when he made the decision to take a knee during the national anthem at his NFL games to protest racial inequality and police brutality. Since then, he's lost his job as a professional football player, he's spurred other players to kneel in solidarity, and he's donated his time, money, and energy to causes bigger than himself.

These are the reasons GQ magazine named Colin Kaepernick its "Citizen of the Year." The publication's profile is full of moving photos as well as accounts of Kaepernick's character written by influential people like film director Ava DuVernay, activist Linda Sarsour, and "artist, activist, legend" Harry Belafonte.

"I see what he's done as art," Ava DuVernay wrote of Kaepernick's protest. "I believe that art is seeing the world that doesn't exist."

Many of the reactions to GQ honoring Kaepernick like this have been extremely positive.

The profile paints him as a modern-day Muhammad Ali, an athlete at the top of his sport who refused to stay silent in the face of injustice, even though his career would suffer. Rapper J. Cole said,

You're talking about a guy in his athletic prime, who's lived his whole life dreaming about playing football at a level that millions of kids dream to get to ... But then, at some point in time, he becomes conscious about what's happening in the world. And suddenly something that he's been doing blindly for his whole life—standing for the national anthem—now feels uncomfortable... It feels like, Man, how can I stand for this thing when this country is not holding itself true to the principles it says it stands for? I feel like we're lying. And look what happens to him. Had he not done that, this guy would be making millions of dollars right now. Period, point blank. And more important than the money, he was living his dream. He sacrificed his dream.

Kaepernick is a hero because he was willing to risk his career for those who do not have a voice.

Nobody is more deserving of Citizen of the Year than Colin Kaepernick, a true American hero who sacrificed his care… https://t.co/ADCk8QeBP8
— Eugene Gu, MD (@Eugene Gu, MD)1510583492.0

The irony now is that the NFL is trying to make him voiceless because he made himself a voice for the voiceless. Which is one of the reasons I'll die on that sword to defend what he has done. Because he did it for the people.

Of course, not everyone agrees that Kaepernick deserved the honor of "Citizen of the Year."

A couple things: Kaepernick is only unemployed because racists fired him. He definitely doesn't hate white people, just systemic injustices that black people face every day, and cops shoot and kill unarmed black people, including children, kind of regularly, so he's a bit justified there. Not to mention I don't think GQ's "Citizen of the Year" actually comes with a trophy.

But what we must remember is that Colin Kaepernick is protesting for the voiceless. He's fighting for equality in a fraught social and political climate, and he's putting his activism before his career. This is what makes him a model citizen — even citizen of the year — to many.