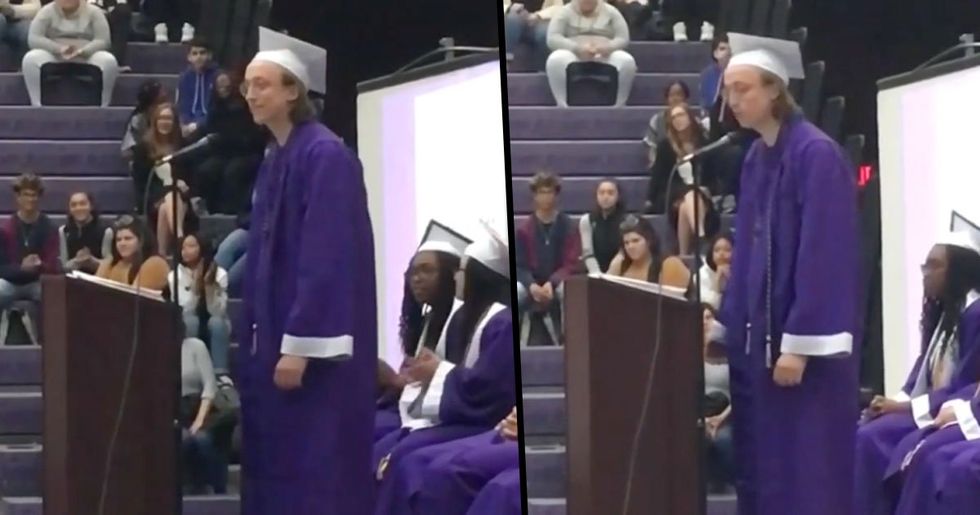 High school. It's not the easiest time for a lot of young people. It's the time when people start growing into young adults and the time in which big decisions in regards to the future are made.

Friends for life are made in high school, but some of the biggest feuds are also very often experienced during this period. Love it or hate it, high school is a character-defining and memorable time in one's life.

But in recent times, more and more accusations have been made against the high school system in regards to bullying and neglect. Many youngsters go through hell and back at the hands of their peers, and more often than not, little is done to resolve these issues.

A recent high school graduate has publicly spoken out about these very issues, and the response that he received was staggering. Read on to learn more and to watch the whole speech.

When it comes to graduating from high school, the majority of youngsters are eager to put their memorable years behind them and face their next adventure, which is usually college or employment.

Our parents often tell us: "high school will be the best years of your life." But, for many, this isn't the case. Bullying can spoil the experience for many. And it's not a new issue, it has been going on since the dawn of time on school grounds, and, thanks to the development in technology and social media, cyber-bullying is one of the biggest forms of bullying today.

It's guaranteed that the majority of teenagers in the United States will say that they've either experienced or witnessed forms of either bullying, neglect, or sexual assault at the hands of those they have met at school.

One student recently voiced his opinion.

Victims of bullying or assault in high school usually live in fear of another attack; this prevents them from telling someone about what they are going through. But in Vancouver, WA, one student has called out his school for not standing up to the abuse that students face on a daily basis.

His graduation speech was one that I'm sure the high school will never forget.

It started as a pretty standard graduation speech...

Charles began his speech in a pretty typical way, reminiscing about his first day, saying: "Heart beating rapidly, palms sweating, mind racing, waiting for all the new experiences I'm supposed to have." We've all been there, right?

He learned to only rely on himself.

Charles went on to say: "Through the years of high school, you will be pledged to only rely on yourself. You will get hurt by people and, ultimately, you will hurt people." It is common knowledge that friends come and go in high school, and many sadly find themselves alone throughout long periods of their time at high school.

"You will get made fun of."

Charles went on to say that "you will get made fun of" in high school. Sadly, the majority of high school students will be able to relate to this. "You will walk through these halls and get called stupid, ugly, an idiot, a piece of crap and so many, many more insults."

The vicious reality of bullying.

Charles perfectly summed up what it's like to walk through the school corridors and be taunted relentlessly.

He went on to outline the reality of what it was like to have been bullied throughout his entire high school life...

"You also get told you're too tall, too short, too wide, too skinny, too smart, too dumb, too different."

Even though you will probably never see your bullies again...

Charles stressed that it doesn't matter if you're not to see these bullies ever again. "We'll never see the majority of these people again in our lives. So I hope in five years, maybe ten years, maybe twenty years and maybe even fifty years from now, you will think back at how four years of what seemed like crap shaped you to be the person you are and who you will be for the rest of your lives."

Charles then began to hammer home the truth of his high school experience.

The speech made a drastically vicious turn against the high school system: "For the seniors, you have to endure two or three more years of what the high school has to throw at you. A school where the administration closes its eyes to everything that happens in the school... the sexual assault, the bullying, the depression, the outcasts... they just cast it aside like its nothing."

The speech finished with a round of applause from his fellow students.

The response from his peers made it obvious that his views resonated. Charles isn't the only student to have fallen victim to the vicious attacks that are inflicted in the school halls on a daily basis.

The school made an official statement.

The school's statement claimed that the accusations that Charles made were "inaccurate" and came from the "perspective of another student." This statement has already received criticism from Charles' peers and other youngsters who have experienced problems with bullying and assault in school.

The high school has allegedly taken away Charles' right to walk at graduation.

So #HeritageHighSchool got mad about #CharlesChandler calling out the bullying and sexual assault they turn a blind… https://t.co/m18GyflQRQ
— Jess (@Jess)1560010178.0

Users on Twitter are expressing their anger at the school's decision to prevent Charles from walking at his graduation.

But whether the school likes it or not, people are standing firmly behind Charles' speech.

Twitter users have shown a surge of support towards the senior, and they aren't letting the school's statement overpower Charles' emotional speech.

He has definitely sparked a change...

Speaking to Katu2, Charles said: "I've been going to this school for four years, and I've seen these problems, and I've seen nothing done about them, and I felt like it was a great place to bring it to light." When asked if changing his speech was worth the outrage, he said: "Yes. I feel like I have definitely sparked change."

Now is the time for this change.

Students have suffered at the hands of bullies for long enough, it's truly time for high schools to take action against the vicious crimes that occur in the corridors.

It's a waiting game to see if action will be taken in the wake of Charles' speech. It's time for schools across the country to accept that bullying is on the rise and something desperately needs to be done. But students such as Charles, standing up for their rights, is a step in the right direction to achieve justice for the millions of students who suffer in what are supposed to be the "best years of their lives."

Everybody should watch Charles Chandler's speech...