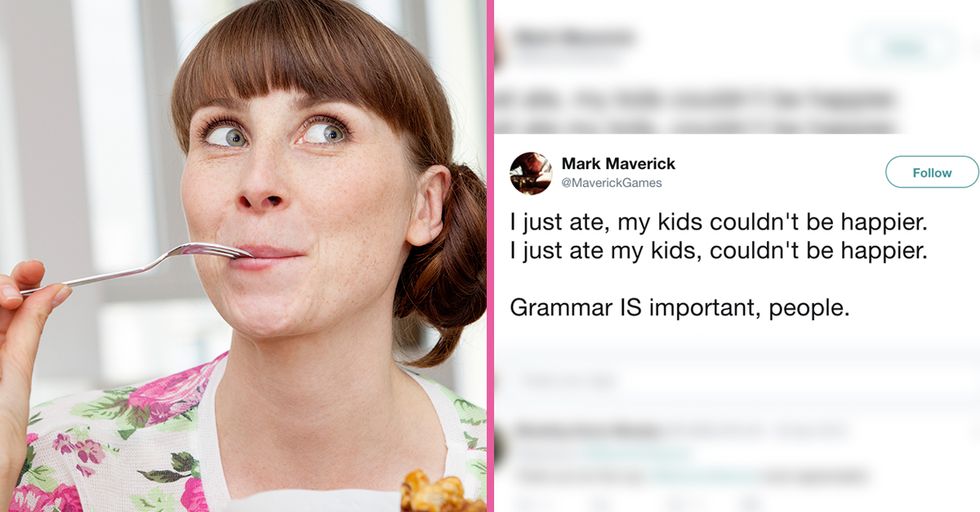 Grammar Jokes You'll Only Get If You're an English Language Expert

Do you swoon over punctuation debates? Do you passionately defend the use of the Oxford comma? Are you constantly correcting people's spelling and syntax (under your breath, of course, so as not to seem rude)? Then you, my friend, are a grammar nerd. Some people like to call themselves grammar nazis– but I think in this day and age, we should probably avoid that term if possible.

Nerds are knowledgeable and excited about the grammar conundrums they encounter every single day. Grammar nerds might feel a chill run down their spines when they see the "10 items or less" lane at the grocery store because they know it should read "10 items or fewer." Grammar nerds know the difference between you're and your and there/their/they're. They don't even have to think twice when they're writing these words out. If you fall into this category, you will relate to these tweets.

"Good grammar is essential, Robin." And think he's talking directly to me since my name is also Robin. You don't have to tell me how important grammar is, though! I agree! And so do the nerds who wrote the tweets below.

[on date] "I think we should take this a step farther" Actually, farther implies distance, while further is figurati- *date already left*
— Terry F (@Terry F)1429575200.0

If your date messes up their grammar, that is forgivable. But if they walk away in the middle of your explanation, that's the end of the line, baby!

Ignoring the fact that the first sentence is a run-on, the point is an important one. It's like that age-old example: I just ate, Grandma! I just ate Grandma!

You never get rid of the Oxford comma! How dare you? You reword and restructure your tweet as much as you need, but you keep that Oxford comma in there.

When you find a typo

This is a bit dramatic considering the person you texted probably doesn't live directly next to you, but yeah, you might want to change your name.

Wow, this a cruel joke to play on people. But I am totally going to use it.

Message in a bottle

You don't deserve to be saved if you can't use proper grammar. Just kidding.

This is an egregious error and just thinking about it sends shivers down my spine.

I am so guilty of this. The em dash is so sexy! So versatile! What a showstopper!

I love this joke. It's a comfort to know that there have been annoying grammar nerds since at least the 1600s.

This is hilarious! However, as a grammar nerd, I do have to point out that Marley and Me is actually correct.

Who is responsible for the capitalization decisions on this sign? #GrammarPolice #copyediting https://t.co/z1qlml9nw7
— Olivia Hammerman (@Olivia Hammerman)1481907821.0

Who was in charge of capitalizing this ad, President Donald Trump? It looks like one of his tweets.

Love a good punctuation joke. And this is a very solid one.

Sure, yeah, there are actual scenarios where whom is correct, but I'm not going to pretend like this grammar tip isn't also totally true.

See, this can get confusing because it is "New Year's Eve," but that's because it is the eve of the new year. Just one. Thank you for coming to my TED talk.

Foreplay is like a semicolon; even if you don't totally understand how it works, you should try it every chance you get.
— Mike Primavera (@Mike Primavera)1443147690.0

Um, I love this so much. Use the semicolon with abandon; it's a genius and pretty flexible punctuation mark!

My love language is correct grammar and punctuation in text messages. That is also why I am still single.
— Jake Peattie (@Jake Peattie)1541100511.0

I am a grammar nerd who doesn't always necessarily use correct capitalization and punctuation in text messages, but I respect the hell out of anyone who does.

Oh, boy. This dad must be so conflicted right now. I do not envy him.

Use "were" for hypothetical situations! I love the idea of a genie that goes around granting people very literal wishes based on their grammar errors.

Yes, there are hard-and-fast rules in place regarding comma usage, but every once in a while, you have to just let them flow out of you. Go with your gut. Commas are art. Commas are life.

The gift that keeps on giving

This is like one of those Highlights magazine hidden pictures, but for grammar errors. I count three errors. How many can you find?

Been reading up on the thesaurus lately because a mind is a terrible thing to garbage
— dino kitten (@dino kitten)1396219697.0

This is a great joke, but it's also a good reminder to check your parts of speech when you are using a thesaurus!

This is funny but also cringe-worthy! I'd rather not be associated with those people at all.

When did we start using quotation marks ironically? I'm genuinely curious about this. If you have the answer, hit me up.

Of course, there should be a comma in there. Share this with the biggest grammar nerd you know!