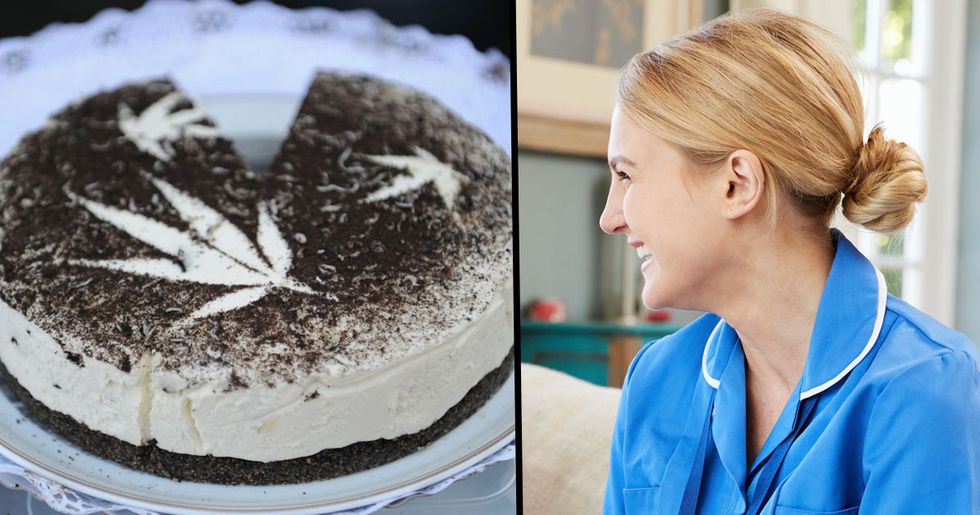 After spending a fair amount of time in hospital, the relief of being discharged and sent home is indescribable.

Many people like to leave a little token of their appreciation for the hospital staff when they leave, and this can come in many different forms: a thank you card, a bouquet of flowers, a homemade cake...

In a normal situation, however, a homemade cake doesn't contain drugs. But for one unfortunate gentleman in the UK, a kind gesture of thanks turned out to be something completely different.

Read on to find out about this grandad's hilariously unfortunate mishap...

Everyone loves a homemade cake...

There's nothing more heart-warming than receiving a freshly baked cake, and the gesture is even sweeter when it comes as a thank you.

A touch of British politeness...

Saying "thank you" is what British people are known best for saying, alongside "please" and "sorry." Let's face it, it's a weirdly polite country.

Giving cakes as a "thank you" is pretty normal in the UK.

Whether it's at a school, in the workplace, or for a friend, the gift of a cake is the ultimate thanks.

Doctors and nurses are no strangers to these sweet treats...

Doctors and nurses are often gifted with cakes or candy from grateful patients who have been in their care for a long period of time. The UK has the NHS (National Health Service), meaning that the majority of healthcare doesn't come with a hefty medical bill afterwards... I know that I certainly would be super grateful for some free healthcare!

Not all cakes are sweet, however.

As many are aware, the addition of marijuana to a cake instantly transforms the sugary treat into "spacecake." A spacecake doesn't just have to be in the form of a cake, it can be made into any other form of edible treat, such as pastries, brownies, or cupcakes.

Marijuana is illegal in the UK.

And you can face some pretty hefty charges if you're caught with it.

A spacecake is an edible form of marijuana.

The effects of the drug are delayed when eaten, but the high that users experience is much more intense and lasts a lot longer than when they smoke the drug. Hallucinations, euphoria, and high bouts of energy are the most common effects of taking the edible form of this drug. However, depending on the user, anxiety and paranoia are frequent side effects and can result in a "bad trip."

People are urged to use the drug with caution...

Despite marijuana being one of the most popular recreational drugs, and being known for its relaxing nature, people are encouraged to handle the drug with caution, especially when it comes to the edible forms.

But a spacecake is not exactly distinguishable...

One of the biggest risks that come with spacecake is not knowing exactly what goes in it. A spacecake looks just like an ordinary cake, or an ordinary brownie. The users have no idea what exactly has gone into their sweet treat, and it could be a lot more than just marijuana. But that's not what this story is about. Let's get to it.

One gentleman in the UK wanted to show his gratitude in the form of a cake.

An elderly grandfather, who has not been named, visited a hospital in May this year to express his thanks to the staff for taking care of a family member. The man, from Greater Manchester, took a red velvet cake to Warrington Hospital as a present for the nurses.

He brought in his grandson's birthday cake.

His grandson has recently turned eighteen and the thoughtful pensioner brought in the remainder of the birthday cake in a bid to give his thanks to the hospital staff; he was completely oblivious to the cake's ingredients.

Three or four members of staff ate the cake...

According to an anonymous member of staff in Warrington Hospital, three or four members of the nursing staff ate a bit of the cake and were left "feeling relaxed" and even "off their faces" afterwards.

The select members of staff were quick to feel the effects...

Speaking to The Daily Mail, the member of staff said: "They were eating the cake and then the next minute the staff were all off their faces."

"It was brought in by a nice old man as a thank you, but it was full of funny stuff and had them all relaxed."

Luckily enough, none of the patients in the hospital got their hands on the cake.

"There was no impact on the patients whatsoever, but they all knew something was wrong, so the police were called in," the nurse went on to say.

The cake was confirmed to be a marijuana cake.

Cheshire Police confiscated the remains of the cake and, after running tests, did confirm that it was spacecake. The old gentleman was completely unaware of its contents, so it wasn't done in a malicious manner.

It was a genuine error.

Speaking to The Daily Mail, a police source said: "It was genuinely an error by all parties, even the person who put something in that he shouldn't have because he didn't know it was going to the hospital."

"Nobody knew that, and that's why we're not taking it any further."

An investigation was held...

The chief nurse of Warrington and Halton Hospitals NHS Foundation Trust, Kimberley Salmon-Jamieson, made this statement: "A homemade cake was brought in to one of our wards in error by a patient's family."

"The item was collected by Cheshire Police to be tested. An internal investigation has been undertaken and we can confirm that 1 member of staff tried the cake, but they did not experience any effects and there was no impact on our patients."

Despite the statement claiming that only one member of staff had the cake...

The anonymous nurse claimed that 3-4 members of staff tried the cake. It appears that a few white lies have been told there...

Can we really blame them?

Admitting to eating spacecake on the job to your boss isn't the best of ideas, so can we really blame the nurses for keeping quiet about their mid-shift snack? As for the gentleman who brought in the cake, the incident was dropped by the police, but he was given some wise words of advice in regards to the future. I'm pretty sure that grandson in question had quite a lot of explaining to do...