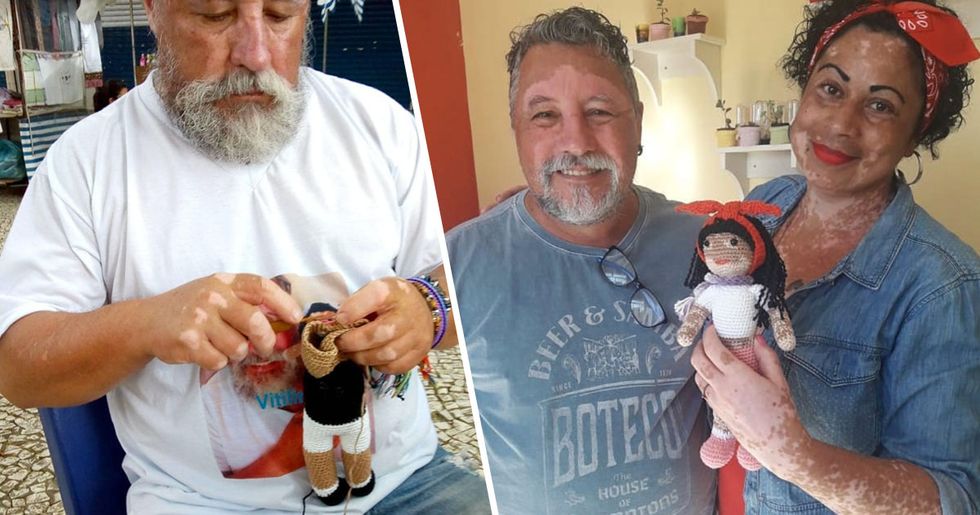 Grandfather Knits Dolls with Vitiligo for Children with the Same Condition

Dolls are a big part of most people's childhoods.

Whether its little boys or little girls, dolls have been the go-to toy for centuries now and it's unlikely that a doll won't be found in the depths of toy boxes around the globe.

But it's no secret that dolls all share the same thing, which is the generic and pristine appearance that is extremely unrealistic.

One grandfather has decided to make a change to this, however, by knitting dolls of his own, but in a much more realistic manner, by giving them vitiligo. Keep scrolling to learn more...

Dolls are a huge part of childhood.

There's at least one doll lying amongst the rubble of the toy boxes around the globe.

Dolls bring comfort and joy to children all around the world.

But there's one thing that is considered slightly problematic about these toys...

Dolls have been considered to be "unrealistic..."

Their immaculate and pristine appearances have been argued to give children negative body images and unrealistic expectations. The Independent reported that a Florida mom found that her five-year-old daughter had thrown a "curvy" Barbie doll in the trash because her legs were "too big" and she didn't fit into "normal" outfits.

Dolls are now much more adaptable...

More diverse dolls are now available, including dolls of different races and sizes.

But what about dolls with skin conditions?

On the toy market today, there are no dolls at all that have skin conditions that millions of children around the world suffer from.

Vitiligo is a long-term condition that affects skin pigment...

The condition varies from person to person...

It doesn't cause discomfort and there's no way of predicting how much skin will be affected as it can develop rapidly throughout a person's life.

João Stanganelli has lived with vitiligo since he was thirty-years-old...

The sixty-four-year-old grandfather from Brazil has learned to accept and embrace his condition over the years, but he realized something peculiar with children's toys...

He has recently semi-retired due to health issues...

João decided to take up a new hobby to keep himself entertained and active, so he and his wife have learned to crochet.

While it was difficult at first, he soon got the hang of it...

Speaking to Bored Panda, João said: "At first my fingers and back hurt a lot, today no more." "I’m not yet retired, I still keep up my old work with food, but much less intensely."

He initially knitted a doll for his granddaughter and the hobby developed from there. But his dolls are extremely unique and different from the regular doll...

They are diverse dolls.

João's dolls have different disabilities - some are blind and some use a wheelchair, for example.

This is when the dolls with vitiligo come in...

His granddaughter also has the skin condition so, to make her feel better about her unique appearance, João created a doll specifically for her.

He began knitting more and more dolls with vitiligo...

"My view of vitiligo seems to me to be very different from the general, I think it is necessary first that you have vitiligo, after this acceptance you choose what you want to do," he went on to say.

The dolls began to grow in popularity...

And the demand was growing. He began using his Instagram and Facebook accounts to display his work and share the joy that his dolls bring to many children.

He recently made a doll for author, Tati Santos, de Oliveria...

Tati's daughter began developing vitiligo when she was just 3-years-old. Tatti plunged into all available literature: "When I learned of the diagnosis, I sought, in addition to treatment, publications for her to feel represented," she said to a local news outlet.

A mere few days after her daughter's diagnosis...

She had written "A Girl Made of Clouds," which tells the story of a little girl with vitiligo who sees her skin colors as clouds.

João himself is a big fan of the book...

He said that "it is a great information tool for parents and children about vitiligo, so I always make it known."

João has done something truly important...

And that is bringing awareness to a skin condition that is much more common that one would expect.

João has made a true difference...

It's easy for children to feel insecure about their appearances, especially when they have a skin condition. The dolls that João makes will allow children to realize that their skin conditions or disabilities are something to be proud of and that it makes them unique from the rest... which is something that is truly special. Keep scrolling to read about another diverse doll that people have been going crazy for.