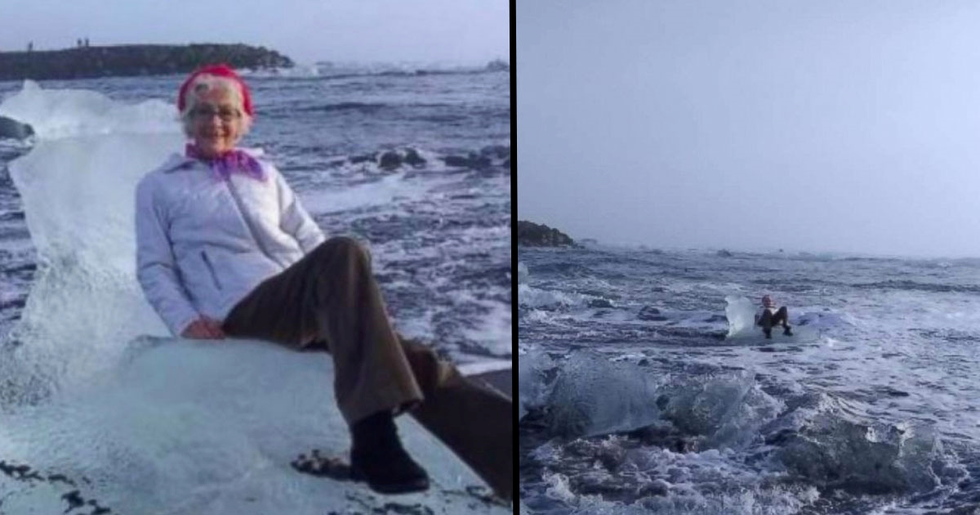 Judith Streng, aged 77 from Flower Mound, Texas, was enjoying a trip of a lifetime visiting the infamous Diamond Beach in Iceland with her son when she spotted the perfect location for a quick Instagram photo.

A huge iceberg shaped like a throne fit for a real life Ice Queen.

Move over Elsa, Judith is the new Queen on the block or berg.

But things suddenly took a sinister turn when an unexpected wave carried poor Judith away from the safety of the shore.

Luckily her son was there to help his mother in her time of need. But not before he took a few more photos of his poor mom's plight to share with his daughter who in turn posted the whole hilarious tale on Twitter.

Diamond Beach in Iceland is an extremely popular spot with tourists from across the globe.

In fact, it is one of the most visited tourist attractions in the whole of Iceland. It is the perfect location for an Insta perfect photograph as well as being great for nature lovers, wildlife enthusiasts and amateur photographers.

It is located by the Jökulsárlón glacier lagoon on the South Coast of Iceland.

This lagoon flows through a short waterway into the Atlantic Ocean and is known in the winter time for being home to hundreds of seals.

But why is it called the Diamond Beach?

Its namesake comes from the stunning white icebergs that wash up on the shore and appear like diamonds. They come in many mesmerising colours, ranging from bright white to brilliant turquoise.

And what makes it even more spectacular is the stark contrast of the ice with the black sanded beach.

This photo actually does little justice to the real life sight of the glistening icebergs against the jet black sand. Sometimes mother nature's work  needs to be seen to be believed.

The icebergs themselves come from the outlet glacier, Breiðamerkurjökull.

Pieces of ice break off of this huge outlet glacier, of the well-known Vatnajokull which is the largest icecap in the whole of Europe, and slowly make their way down the ocean with many landing on the Diamond Beach shore.

This spectacular location even has its own ice caves.

A must-see for anyone visiting this untouched, natural wonder of the world, just imagine being surrounded by glaciers that are hundreds, and possibly even thousands of years old, but be warned it can be dangerous. Although this is a relatively safe beach to visit for any responsible traveler, there are still elements that need to be considered and safety precautions need to be taken. The main advice being not to climb onto an iceberg.

But apparently many did not get (or just chose to ignore) the memo.

The slippery surface and sharp edges of the icebergs can be dangerous when climbed and under no circumstances should visitors climb onto one whilst its still in the water. Not only could you slip and drown but you could even become trapped beneath the iceberg itself. Not at all pleasant.

And it certainty did not deter 77 year old Judith Streng from climbing aboard one last week.

Ahh what a lovely idea. Perfect photograph to show the grandkids. What could possibly go wrong? Well, she would soon find out.

It all started when she decided to visit Diamond Beach.

Judith Streng, from Texas, and her son Rob were travelling together in Iceland as Judith wanted to experience the "nature and beautiful scenery" of the country.

And it wasn't long before Judith spotted the perfect place for a quick pose.

Which of course we get. Who wouldn't want to look like the ice queen herself whilst on holiday? It's the dream.

Unfortunately a large wave started to carry her away from the safety of the shore.

Ms Streng has since shared: "A very large wave came in and kind of made the throne rock, and I could tell I was slipping off." Panic stations all round.

And unfortunately Judith does not have super powers like Elsa.

So she was unable to freeze the water and makeshift herself a slide or similar escape route back to the safety of the land. Thankfully, a quick thinking boat captain came to her rescue.

But not before her concerned son took a few photos of her plight.

Which he then sent to his daughter (pictured here) with several amusing anecdotes describing exactly what happened.

And here is what he had to say about the incident. All hail the Iceberg Queen.

"Lost her kingdom when she drifted out to sea!" You can't make this sh*t up!

Catherine then posted her grandmother's disaster day all over Twitter.

This grandma had to be rescued after posing on a throne-shaped iceberg and was washed out to sea… https://t.co/CmaYwZCodf
— The Poke (@The Poke)1551653700.0

And it has been retweeted over 71,000 times. We hope when we are older, our grandkids may actually care whether we drown or not!

According to Judith, it just looked like a bit of fun.

She has since explained that she did not see the harm in climbing aboard the throne. "I thought it was safe. I don't weigh very much so it was a little easy to float off I guess."

Plus she had already seen several others posing on it.

In fact, this is an extremely popular pastime with tourists who obviously do not know the dangers of icebergs. Especially those floating in the sea.

But most shocking to some is that the son's first instinct was to take more photos!

To be fair to him, she was the one that was silly enough to climb onto the ice just for a photo opportunity. But we wonder when he decided to stop clicking away and start calling for help?

But the dubious intentions of the son aside, most found the whole story hilarious.

We can just imagine one minute she was all smiles and laughter and then the next moment the penny would have dropped and she would have realised she was slowly going further and further out to sea.

Others loved the son's comments as he shared the tale with his daughter.

Just in case she thought he was kidding about the whole grandma lost at sea messages, he thought best to clarify that it was no joke. She was actually drifting slowly away into the unknown depths of the sea.

Some just shook their heads in disbelief.

Seriously lady, what did you think would happen if you sat on a huge chunk of ice in the ocean? Best case scenario, you start to drift off to sea. Worst? You sink.

Elsa better up her game.

No-one is irreplaceable Elsa, and Judith has certainly given you a run for your money with these amusing pics. She is definitely rocking the iceberg Queen look.

We all have that one friend that if you take them anywhere even remotely dangerous or where there is a possibility of an accident, it will 100% be them that hurt themselves.

On a more serious note.

When visiting another country that you are unfamiliar with, you should really listen and take note of warnings and advice from the locals. We are only thankful that she didn't really hurt herself.

As funny as the photos are,  it could so easily have been a tragedy we were writing about today. The ocean is unpredictable and should not be underestimated.

And she is not the only one taking risks for the perfect selfie.

Travel bloggers Raquel and Miguel from Portugal were recently criticised for their recent upload which showed Raquel leaning her entire body out of a moving train.

And don't even get us started on this lunatic.

The bare faced cheek, so to speak, of it! This takes the term dare-devil to a whole new level.

And you may be shocked to hear that there have been 259 deaths since 2011 that have occurred whilst people are taking a selfie.

Just remember this stat when you next want to take the perfect selfie and will do anything to do so. It didn't work out too god for Thelma and Louise, now did it?