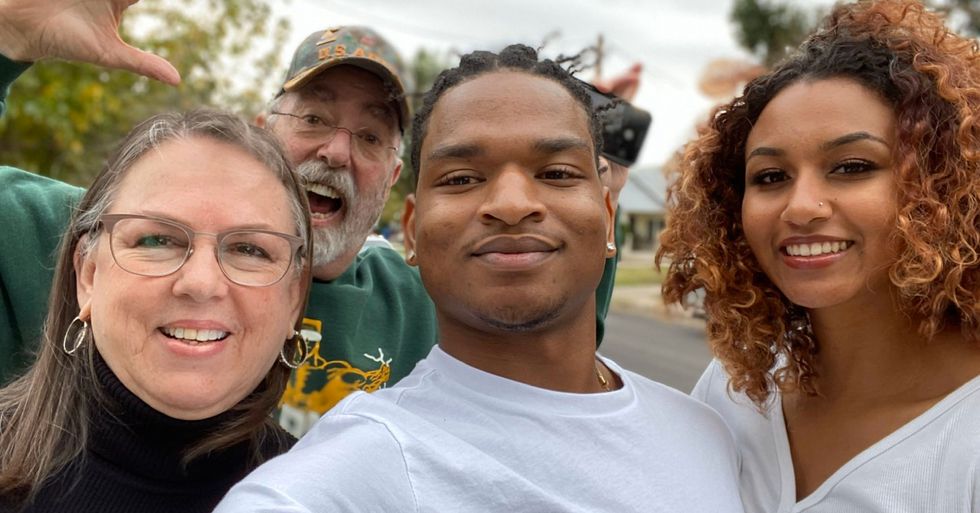 Wanda Dench, the kind-hearted grandmother who went viral for accidentally inviting a stranger to Thanksgiving back in 2016, has tragically lost her husband to the deadly virus.

In 2016, a cell phone number mishap led to the most unlikely of friendships.

We all remember hearing the heartwarming story of Jamal Hinton and Wanda Dench, who came into contact as a total accident at Thanksgiving.

As we all know, Thanksgiving is one of the most heartwarming times of the year...

And is a time for good food, family, friends, and laughter.

And we all know that the feast is the highlight.

But, most importantly, it is the time to be thankful for the people you have in your life.

And, while most choose to celebrate with their closest friends and family members, others open their homes to strangers too.

Back in 2016, during the lead up to Thanksgiving, something pretty strange happened to Jamal Hinton.

You may remember that the then-teenage Jamal went viral for a cell phone number mishap that brought him and a complete stranger together for the holidays.

It all happened when Wanda Dench, now sixty-two, thought she was texting her grandson to invite him to Thanksgiving.

But, instead, she actually texted Jamal.

He was accidentally added to the Thanksgiving family group chat...

And, when Jamal replied asking who was texting him, Wanda innocently and hilariously replied, "Your grandma."

Jamal then responded by asking for a photo to see if it was his own grandma behind the text.

But he was left shocked when the picture that came in was of a woman with blonde hair and glasses - Certainly not Jamal's grandma.

Yep, quite clearly not his own relative.

"[You're] not my grandma," Jamal replied with a laughing emoji.

And of course, he then returned the favor...

Jamal, who is from Phoenix, Arizona, sent back a selfie to let her know he was not her grandson.

But, despite not knowing each other, Jamal didn't want to pass up the thanksgiving offering.

Clearly touched by the sweet text-message exchange, he asked if he could stop by for dinner anyway.

Jamal tweeted out the conversation where it was quick to go viral.

People loved Wanda's promise that Jamal could still come around for Thanksgiving dinner because "that's what grandmas do... feed everyone." And although Wanda changed her phone number after receiving a flood of messages from people amused by the exchange, Jamal kept in touch with the family following the initial texts.

And on Thanksgiving, Grandma kept her end of the deal.

Wanda confirmed that Jamal had indeed come over for Thanksgiving dinner, making the drive to Mesa, Arizona and that it was destiny that the two met.

The pair decided to make a tradition out of the mishap, and have spent Thanksgiving together for the last 4 years.

They've met up every year since their group chat mishap.

And every year, Twitter is blessed with a photo of Hinton and Dench enjoying Thanksgiving together.

Wanda explained in the video that she grew up in the military - her father was in the Navy and her husband was also in the Army. "We moved around a lot so I was always going to new places. And so strangers were not strangers to me," she explained. "Family is more than blood, it's the people you want to be with."

They are now firm friends.

And they are showing no signs of breaking their tradition.

And last year, Jamal decided to host the festivities.

Wanda and her husband were invited to spend Thanksgiving at Hinton's girlfriend, Mikaela's, Aunt Tauna's house.

Jamal says he "feels great" that their wholesome tradition has continued in the years since they first met.

"[Wanda] is a really good person," he explained to Good Morning America. "I really enjoy the time I spend with her."

It is the most heartwarming thing.

But now, Jamal has come forward with some devastating news.

Both Wanda and her husband, Lonnie, have been diagnosed with the deadly virus...

And, according to Jamal, Wanda is currently in hospital with both the respiratory virus and pneumonia.

Where he wrote: "I am so sad to announce that Wanda and Lonnie both have COVID-19 and that Lonnie is currently in the hospital fighting both COVID and Pneumonia please send words of love and encouragement their way."

But things took a turn for the worst yesterday...

As some of you may have already found out tonight Lonnie did not make it... he passed away Sunday morning😔 but Wand… https://t.co/WbkDfWtuOg
— Jamal Hinton (@Jamal Hinton)1586404707.0

"As some of you may have already found out tonight Lonnie did not make it... he passed away Sunday morning but Wanda told me all the love and support he was receiving put a huge smile on his face so I thank every single one of you guys for that!"

And we send our deepest condolences and love to Wanda's family during this difficult time.