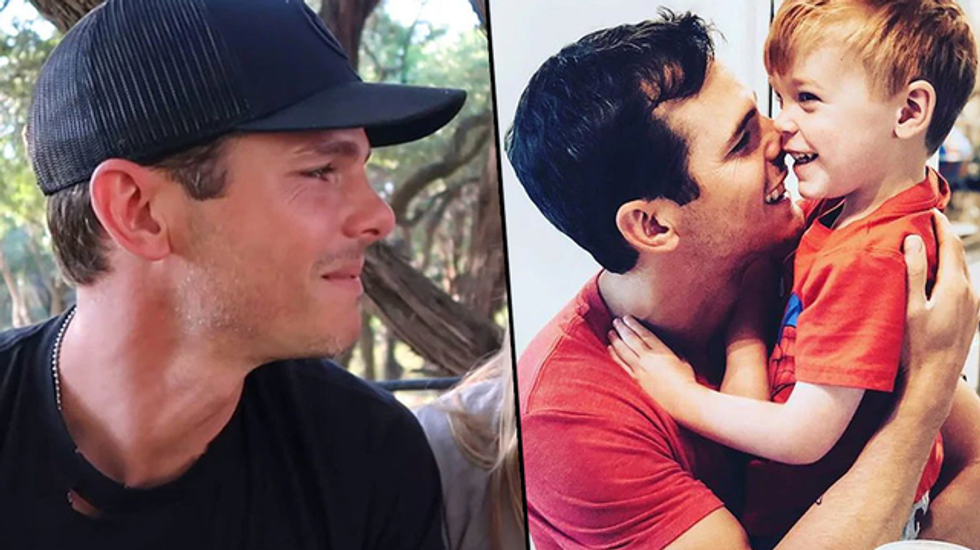 Fans of country music singer, Granger Smith, were heartbroken to hear some tragic news earlier this month. His son, River Kelly Smith, died in a horrific drowning accident near the house that Smith shared with his wife, Amber. In spite of the best efforts of medical professionals, River didn't make it and his family have been left grieving their son. "The joy he brought to our lives cannot be expressed and his light will be forever in our hearts," wrote his parents in a tear-inducing Instagram caption.

Now Granger has made the brave decision to speak out about the accident that led to his son's tragic death in an incredibly brave YouTube video. If you want to get deep within your feelings, we've got it right here to watch.

Born in 1979 in Dallas, Texas, Smith has a range of incredibly popular songs. He's also performed three times at the White House, plus he was been flown to Iraq and Kuwait to perform for the troops in 2008.

He's known for being a kind, mild-mannered Texan.

But Smith actually has a stranger alter-ego - a man named Earl Dibbles Jr., who epitomizes the many stereotypes that tend to follow country musicians around.

Dibbles even has an annoying catchphrase.

Speaking to Country Countdown, Smith said, "Earl started as a promotional tool.  My brother & I were making YouTube videos.  The goal was to get a million views. Try to come up with something that would go viral.  Earl was a voice, I hadn’t used that voice for years.  It represents a mixture of some family members and friends.  I went to my parent’s house, went to the closet, found some overalls I wore in high school football, some boots, a trucker cap, we drew some tattoos on me, literally no thought to any of this, besides I’ll adlib a day in the life of this country boy."

In real life, Smith is a far cry from Dibbles.

Sure, they're both country singers, but the similarities end there. Smith is a softly spoken, chilled out family man, and he's proud of it. He married Amber Emily Bartlett in February 2010, after the two met on set of one of Smith's music videos.

Smith is also a proud father.

After marrying Amber, the pair had three children. Their daughter, London, was born in 2011, their first son, Lincoln Monarch, in 2015, and their youngest, River Kelly, in 2016.

His social media is filled with pictures of his cute kids, and it's clear that they are a tight-knit family who love spending time together.

But earlier this month, tragedy struck.

Amber and Granger's youngest son, River Kelly, sadly passed away in a horrible accident, which has left the family feeling the impacts of their loss.

Almost immediately afterwards, Granger shared a tribute on his Instagram.

"I have to deliver unthinkable news. We’ve lost our youngest son, River Kelly Smith. Following a tragic accident, and despite doctor’s best efforts, he was unable to be revived. Amber and I made the decision to say our last goodbyes and donate his organs so that other children will be given a second chance at life. Our family is devastated and heartbroken, but we take solace in knowing he is with his Heavenly Father," Granger wrote.

She wrote, "Riv was special. Everyone that met him knew that immediately. The joy he brought to our lives cannot be expressed and his light will be forever in our hearts. If there are words to say more, we cannot find them in this moment. Love the ones close to you. There has never been a more difficult moment for us than this."

The pair also made a heartbreaking request.

"In lieu of flowers or gifts, please send donations to Dell Children’s Medical Center in River’s name. The doctors, nurses and staff have been incredible," the grieving parents asked.

Since then, the pair have continued sharing heartfelt tributes.

"If you believe in our God like we do, we know now that Riv was sent to this Earth so we could experience his joy, laughter and love for 3 years. And then Jesus came and took his hand before he went under and took him home. God didn’t bring our little boy back to us, but God and Riv performed at least 2 other miracles that day for other mamas and daddies praying that someone would help save their child. Grief is such a strange thing," wrote Amber.

He said, "The finality and mortality brought on by death makes life feel fragile. It can weaken, terrify and separate those close to it. But it can also awaken us. It can remind us never to take a moment with those we love for granted."

The parents also bravely made a YouTube video in tribute.

In it, they explained what happened in the run-up to the accident. Granger claims that he was playing with his daughter, London, while Lincoln and River engaged in a water fight - just like an ordinary, chilled out family day.

The grieving parents describe attempting to resuscitate their youngest son by performing CPR, before accompanying him to the nearest hospital. Horrifically, he could not be saved and was pronounced dead two days later.

The parents managed to speak at River's funeral.

But they've expanded on that message in their YouTube video, which goes into further detail about how they've managed to deal with this unthinkable loss.

The pair tried not to focus on how short River's life was cut.

"I don't think God takes anyone too soon. I believe he was put on this Earth for that exact amount of time," Granger said, noting that River had been alive for just over a thousand days.

Granger stressed that it was about quality, not quantity.

He claimed, "If you could live those days barefoot, red hair flying back on your tractor full speed ahead, if you could do that with your family around you, with no real care in the world, that's a good way to live."

He also commented on music's power to heal.

Granger says that he'll soon return to touring, as he finds music therapeutic in times of need. The couple also say that they are "stronger than ever" since the horrific loss.

They're determined to find something good out of this.

"We feel very blessed. We had an incredible boy for three years, and we feel good about that," said Granger in the video.

It's certainly a tear jerker - but the fact that the couple have managed to find anything to be positive about is nothing short of remarkable. Their final message? To live like Riv.