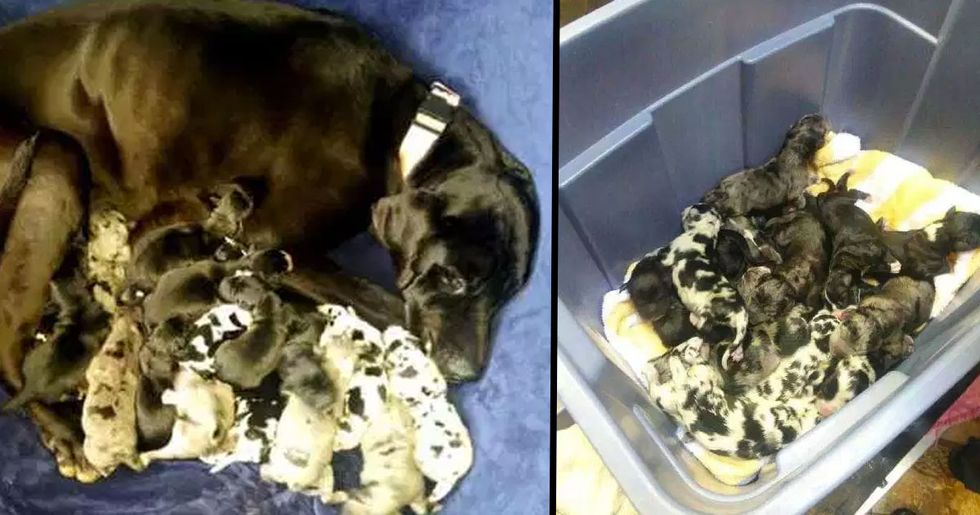 In this modern world, where cuteness is memed into existence, and cats wage an increasingly large scale war against dogs for the position of the internet’s mascot, it’s tough to find genuinely cute animal stories. But this Great Dane may have just found you one. Cleo, from Kingman Arizona, recently gave birth to a humungous litter of nineteen puppies - that’s unheard of. The litter was photographed with the mother in hospital and the photographs have, unsurprisingly, gone viral.

It all happened in the town of Kingman, in Arizona - a small town with a population of around 30,000.

Cleo was all set

Cleo, a Great Dane, was set to give birth via caesarian section surgery.

Something to bare in mind.

The average litter size of a Great Dane is 8 puppies.

But this time doctors were taken aback.

Doctors at Kingman Animal Hospital were amazed at the number of puppies Cleo successfully gave birth to.

Yes, Cleo gave birth to 19 puppies. Can you imagine having 19 Great Danes? Where would you keep them?

And all completely healthy

With so many puppies the chances of miscarriage are very high, but Cleo pulled it off and all 19 puppies were declared healthy.

‘Thank you all for the kind words and congrats to the momma dog and our hard working staff that came in for this emergency,’

Just to remind you...

Great Danes are huge, they can grow to up to 44 inches from paw to shoulder. Now imagine 19 of them.

Though they’re known to be very gentle

That’s usually the correlation, the bigger the dog the more relaxed it tends to be.

Here are some Great Dane highlights

To round this off, let’s look at the breeds best moments.

Here’s one with David Bowie

This amazing picture happened during photoshoot for Aladdin Sane

Here's one at the beach

Here’s a video of a Great Dane on the beach. There’s something about it isn’t there?

Here’s one in a pool

This dog knows how to relax.

Here’s one being given a hard time by a Chihuahua

This can’t be real.

Lady Gaga's $500,000 Reward for Her Stolen Dogs Labeled as 'Irresponsible'