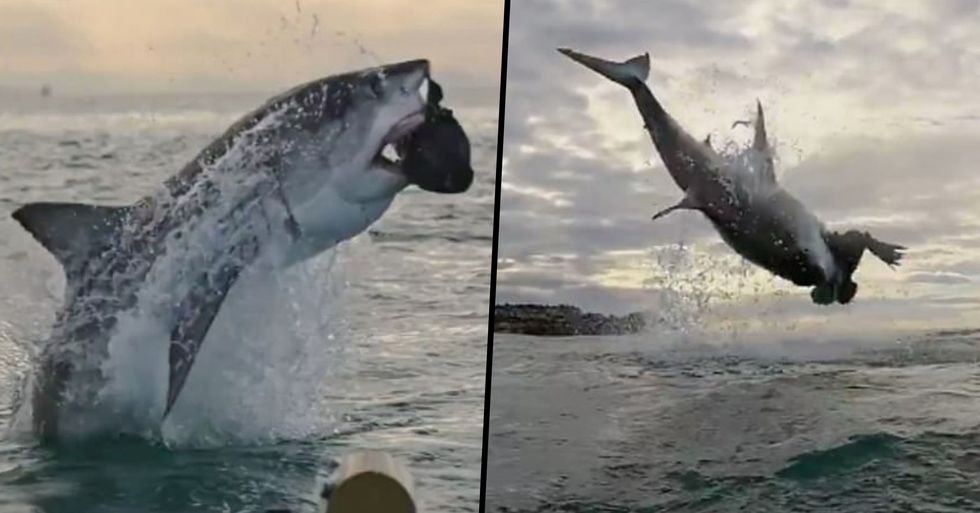 Great White Shark Soars 15ft in the Air, the Highest Breach Ever Seen

A picture shared to twitter has left everyone with chills, as one woman managed to capture the "ultimate breach," when a great white shark came out to play.

Keep scrolling for the best Twitter reactions, and see the magnificent picture for yourself...

Mother Nature is truly not a force to be reckoned with...

And some recent pictures certainly prove this.

When it comes to the ocean there's still so much we don't know.

Although perhaps we're better off in the dark.

We've all watched documentaries about the strange creatures found at the bottom of the sea.

But some of the most frightening creatures live a little closer to the surface...

And it seems the warmer waters of recent weeks has allowed for the most magnificent spectacle involving one of the world's oldest preditors...

Straight out of a movie scene.

We're all aware of the fact that sharks are on top of the food chain...

And these magnificent creatures aren't ones to be messed with.

And don't they know it.

Life out in the wild can present us with some horrifying things...

And just wait until you see what someone captured recently of a great white shark...

If you weren't already scared of what lurks in the deep...

Then this might just put you off the beach forever.

And it has left people in shock...

Catching the moment a great white shark shot fifteen feet into the air, making it one of the highest breaches ever recorded.

Experts from all over came together for Air Jaws Ultimate Breach, in order to take the best shot.

One expert opted to use drone technology.

While another shot at night.

However, nothing compared to the images captured by Fallows

Who used a tow camera, managing to get the most incredible shot.

And she is just as surprised.

"This has to be the ultimate air jaws breach."

Ultimate Breach director Jeff Kurr said, "Chris got some unbelievable breaches. In fact, one of the breaches is probably the best he's ever filmed."

The show originally launched in 2001.

Kurr added: "More than any other Air Jaws we've done, this one has a really strong conservation message: We have to do something to protect these great white sharks because they are on the brink of annihilation."

Viewers marvelled at the shots taken by the experts on the show...

With one person posting: "Another awesome drone breach shot!"

Another joked: "Watching Air Jaws on Discovery rating the breaches like an Olympic judge."

A third posted: "Every time a shark breaches, I'm just like WOW! It never gets old."

Check out the photo that everyone's talking about below...